Who’s the Talk of the Small Screen? The Muppets Lead in Water Cooler Conversations, While Scream Queens is Number One on Social Media

This is the first look at the buzz created around the new fall 2015 TV lineup from a “Total Social” perspective. ‘Total Social’ combines Engagement Labs’ proprietary eValue social media measurement tool and TalkTrack®, the leading measurement source of word of mouth conversation from the Keller Fay Group, an Engagement Labs company. Rankings are based on the most talked about new fall TV shows for the week of September 21 to 27, 2015.

According to Talk Track and eValue data, here are the rankings for new fall TV shows for offline word of mouth conversation and on Facebook, Twitter and Instagram. 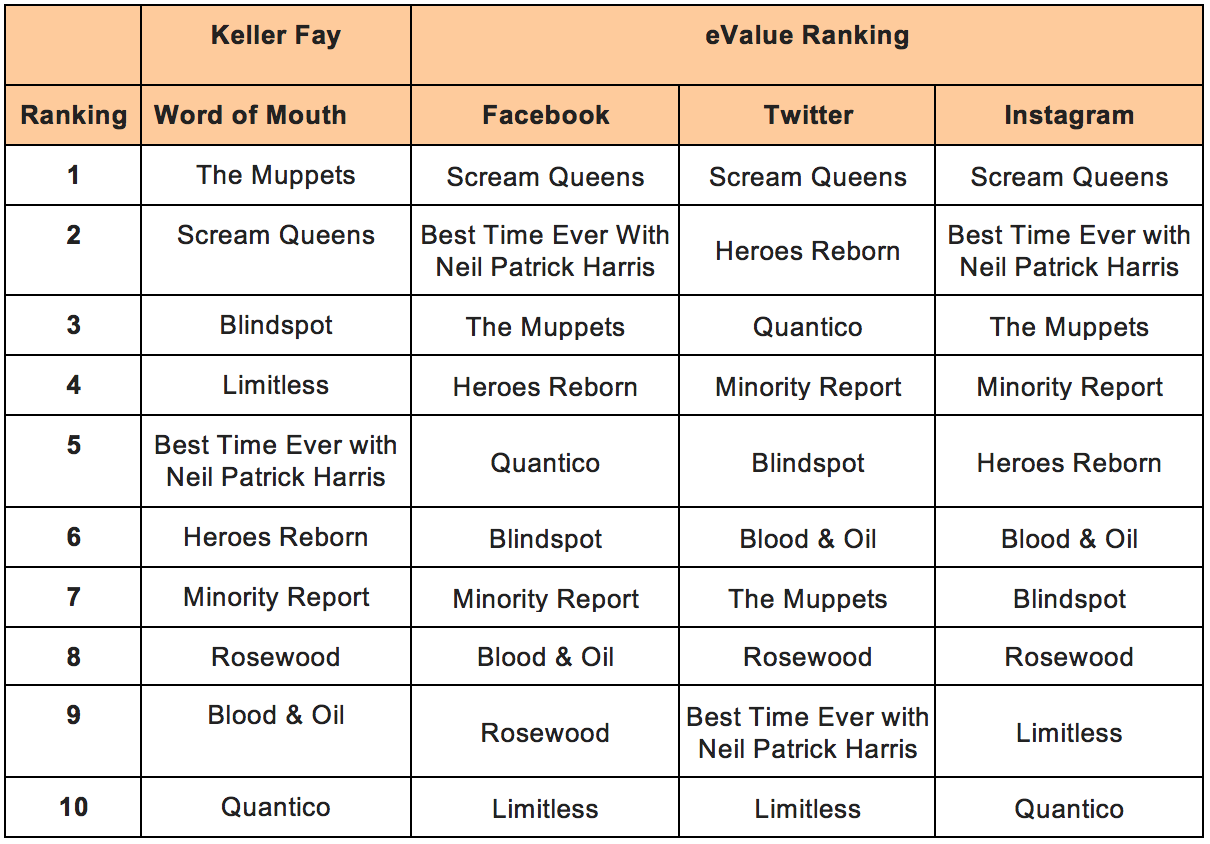 The Muppets was the most talked about new show among both men and women, according to Keller Fay Talk Track data. However, Scream Queens leads in the social media space garnering the highest eValue scores across the board on Facebook, Twitter and Instagram.

“Fall is the time of year when TV networks compete for audience eyeballs and TV becomes an important topic of conversation. Whether offline, around the water cooler and the dinner table, or on social media, where shows can extend their audience reach and engage fans, ratings success – and advertising dollars – often hinges on being part of conversation,” said Ed Keller, CEO at Keller Fay and President of Engagement Labs. “During the timeframe of this study, our data found that nearly half of Americans talked about one or more of the new shows during the week measured. Breaking it down, 51% of women have talked about at least one show, compared to 39% of men,”

Number one for offline conversation, The Muppets, also fared well online, ranking third on Facebook and Instagram. On social media the show received high Engagement and activity among followers. However, where the show lacked online was in responding to fans. The show scored 0 in Responsiveness across all platforms.

“As social media provides audiences the opportunity to interact directly with brands, The Muppets lack of responsiveness is seen as a missed opportunity to create engagement, amplify conversations and build brand affinity among followers,” noted Keller.

The other big winner was Scream Queens. It owned the online conversation and took the second spot for word of mouth (WOM) conversations. The show received twice as much WOM activity among women than men. However, it was the most polarizing of the new shows, receiving well below average sentiment among both genders. On social media, the show actively participated on Twitter during the premiere and experienced a huge increase in follower activity, doubling its active user base following the premiere. This was due to posting content their followers were able to engage with, responding to fans and also retweeting its cast’s tweets which features many influential celebrity figures.

Additionally, Keller Fay data found that Heroes Reborn, Quantico, Limitless and Minority Report all received the highest levels of positive WOM sentiment among the Top 10 most talked about shows. The Best Time Ever With Neil Patrick Harris had the second highest eValue score on Facebook and Instagram and the highest active user base among all the shows ranked.

“Leveraging ‘Total Social’ data and insights through word of mouth conversations and online social media measurement, Engagement Labs is able to deliver a 360 degree view of the conversations that are happening around products and brands, including TV shows and other entertainment properties. This view provides deeper insight to a brand’s audience base and how they are engaging with a brand. This allows brands to create content that will resonate with audiences and encourage positive conversations both online and offline, enabling them to create multi-channel influencers and broaden their overall reach,” continued Keller.

Engagement Labs will continue to measure the new fall TV programming leveraging ‘Total Social’ data on a weekly basis. For more information on the rankings or to receive the full data set please contact – Jessica.Dellaquila@engagementlabs.com