Which U.S. Colleges and Universities Graduate With Honors in Social Media?

Most students entering their first year of college this fall have grown up during the social media age. Understanding today's generation, institutions have adapted and learned to embrace the use of social media. According to a study from Dartmouth University, 100% of universities in the U.S. are using some form of social media. There has not been any other industry that can claim this level of adoption.

According to eValue data, the top 50 universities and colleges* on social media are: 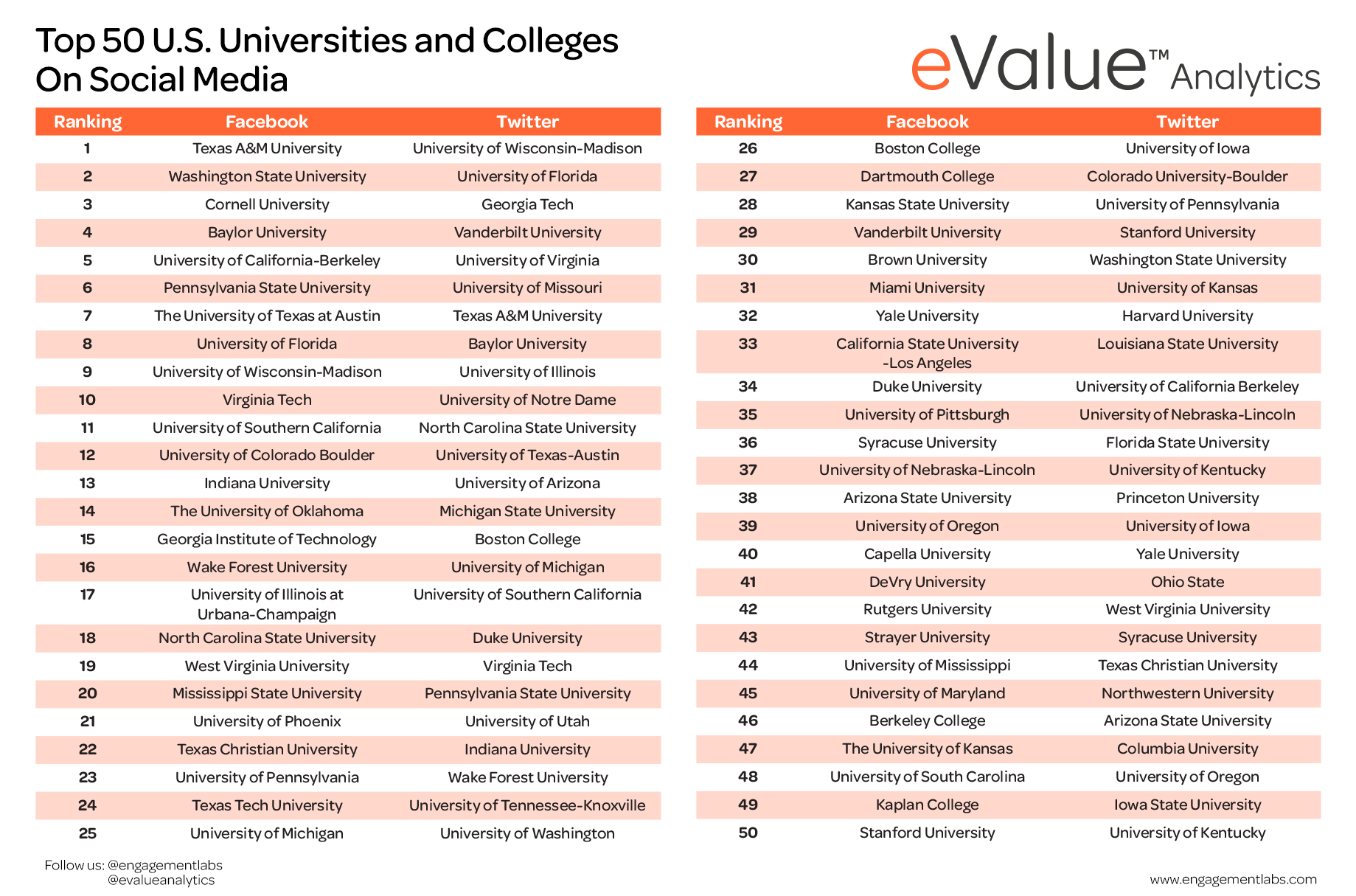 "Social media plays a critical role in both recruitment and retention for universities and colleges. These institutions are realizing that their current and prospective students are actively using social platforms to communicate and stay informed," said Bryan Segal, CEO of Engagement Labs. "Not only are institutions using these networks to promote their school but they are also posting content about upcoming or past events and sharing photos and videos. Additionally, parents of these students are following institutions' social platforms to stay informed of recent news and events."

If executed correctly, social media can be the most effective point of contact for students, especially those looking to get answers in a hurry. For example, University of Wisconsin-Madison was ranked number one on Twitter with an eValue score of 82.89 out of 100. They had a high Responsiveness score and high Average Response Time score which is imperative for universities using social media as a channel to interact and communicate with their student body.

Texas A&M University, which describes itself as a leader in social media, lives up to its claim by ranking number one on Facebook, with an eValue score of 84.74. The University is posting content that is prompting high engagement and interaction with its followers and thrives on highlighting student, alumni and sports team achievements. They also had the second highest Engagement subscore of 92.35, just behind Washington State, which took the number two spot on Facebook.

"When looking at the total number of Facebook fans versus Twitter fans, overall Facebook had three times the amount of total followers than Twitter. However, when looking at the Responsiveness scores, institutions are much more responsive on Twitter. The mix of reach and responsiveness delivers very meaningful results that allow these institutions to maximize impact and return on investment with their social channels," noted Segal.

*Methodology: The colleges and universities examined included those categorized as Ivy League, for-profit, and those within the following NCAA conferences: the Big Ten, the Big 12, the ACC, the Pac-12, and the SEC.