Which Coffee Companies Have the Right Social Media Blend? Starbucks Leads the Pack Amongst Competitors Dunkin’ Donuts and Tim Hortons

“Coffee is the second most sought after commodity in the world and the average American drinks approximately three and a half cups of coffee a day. That said, coffee brands and chains have a huge opportunity to leverage their social media channels to stay top of mind among consumers looking for their morning, afternoon or even evening cup of joe,” said Bryan Segal, CEO at Engagement Labs. 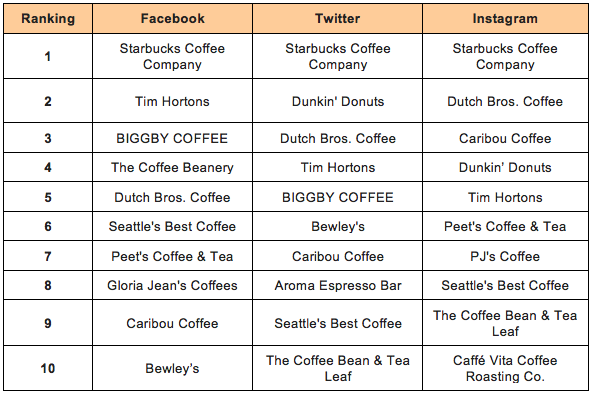 “Looking at coffee shop chains, we found industry frontrunner, Starbucks, takes the lead across all social platforms – Facebook, Twitter and Instagram. On all three, the brand outperforms the industry average in all subcategories: Engagement, Impact and Responsiveness. Starbucks leverages these platforms by posting images of their beverages and food options with an emphasis on relating the beverages to the season,” continued Segal. “For example, with the revival of the much anticipated Pumpkin Spice Latte, the brand ran a campaign to target diehard fans looking to get early access to the tasty treat, encouraging them to visit their Tumblr page and find the secret code.”

On Facebook, Tim Hortons came in at second place, outperforming Starbucks in the Engagement and Responsiveness subcategories. Tim Hortons uses a mix of professional images, user-generated content and videos to enhance engagement among followers.

On Twitter, Dunkin’ Donuts took the second highest eValue score after Starbucks. The brand had the second highest Impact and Responsiveness subscores and leverages a variety of content to create engagement among their diverse follower group, from sports-related, to seasonal content. Similar to Tim Hortons, they also leverage a large amount of user-generated content showcasing their fans enjoying Dunkin’ Donuts treats. This enables their audience to see everyday people become brand supporters in a way that is more authentic to fans and establishes credibility.

When looking at the rankings on Instagram, Dutch Bros. Coffee was ranked second place. The Western U.S. based company held the highest Engagement and Responsiveness subscores, along with the highest active user base. Similar to the previously mentioned chains, Dutch Bros. Coffee’s scores can be attributed to engaging video and user-generated content that tags the users who contributed the images. 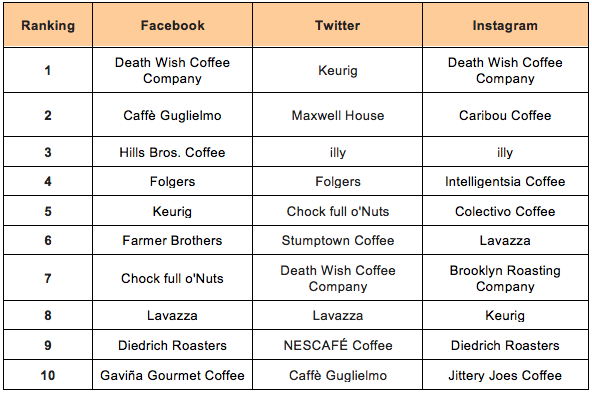 “When measuring social media, many people automatically assume effectiveness is based on the number of followers a brand has. However, it is imperative for brands to remember that the true measure of an effective social media strategy is to understand their follower base and the type of content with which they want to engage. For example, Death Wish Coffee Company is a significantly smaller brand than such competitors as Keurig or Maxwell House, but they garnered the top ranking on both Facebook and Instagram because of their high levels of engagement from followers, generated by their cheeky and humorous coffee-centric content,” notes Segal.

Industry veteran Folgers came in fourth on Facebook with an eValue score of 65.54 and had one of the highest Impact and Responsiveness subscores. However, the brand’s Engagement subscore was below the group average, which can be attributed to the fact the brand posts significantly less content than some of their top competitors. However, with the numerous comments on their page, they have created a successful response strategy by responding to comments in an average of just fewer than two hours.

On Twitter, the larger brands came out on top with Keurig having the highest eValue score and Maxwell House, Illy and Folgers following in the ranking. Keurig not only had the highest number of followers, but also the highest Impact subscore.

Engagement Labs (TSXV:EL) offers intelligent social data, analytics and insights for organizations that are actively engaging on social networks. Offered as a SaaS or through an API, the eValue Analytics platform allows brands to measure and maximize the effectiveness of their social media marketing campaigns, as well as measure that of their competitors across major social networks Facebook, Twitter, YouTube and Instagram. Additionally, through the Keller Fay Group division of Engagement Labs, brands can also measure the marketing performance of offline word of mouth conversations. Engagement Labs maintains offices in Toronto and New Brunswick, New Jersey. www.engagementlabs.com / www.evaluesuite.com