According to the eValue data, the Top Ten QSRs in the United States are: 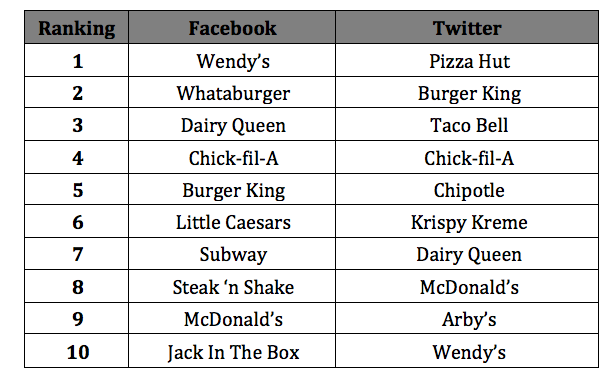 “The competition has never been fiercer in the quick service restaurant sector than it is today with more options than ever before. On a daily basis, social media is used to introduce new products and promotions to build loyalty and stay top-of-mind,” said Bryan Segal, CEO of Engagement Labs. “As the QSR industry struggles to counteract a decline in sales and broad competition, it is important to stay relevant with consumers by interacting with them on social media.”

Segal continues, “An interesting analysis we found was that niche brands like Chipotle and smaller chains like Whataburger, which is a family-owned restaurant that has locations in only a few states, were part of the top performers. This proves that no matter how big or well-known the company is, if their social media strategy resonates effectively with their audience, they will have an incredibly engaged fan base.”

The eValue tool allows for a more in depth social media analysis by measuring brands’ performance based on multiple metrics. One of the measurements that was examined more closely for the top QSR brands was Responsiveness, which measures how much, how fast and how well a brand responds to actual conversations amongst its users. The following chart ranks the Top Ten QSR brands in the US based on Responsiveness on Facebook and Twitter. 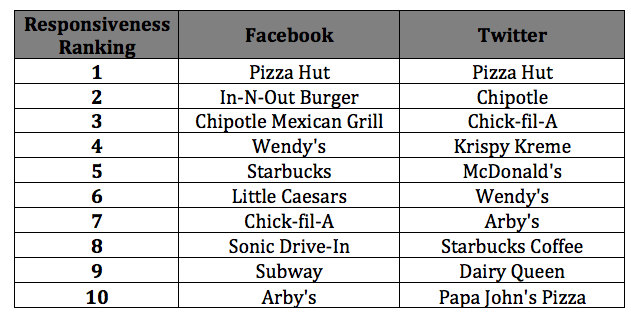 Wendy's, one of the top performers on Facebook, creates posts that resonate well with their followers which increases interaction. For example, the post that received the most likes and comments was about their salad offerings. The Company established a successful strategy by posting videos of how the salads were being prepared and also images of the different types that are offered which could be a reaction to the increasing demand for healthy food. Their responsiveness score on Facebook was well-above average which compliments their successful social media strategy.

Pizza Hut, the top performer on Twitter based on Responsiveness developed a strategy to respond back to their followers in a timely manner which was extremely effective. Another brand that is performing well on Twitter is Chipotle. Chipotle retweets users who engage positively with the brand which increases their brand equity.

eValue Analytics™ is the global standard for social media scoring, leveraging more than 300 conventional social media metrics to provide a single comprehensive and benchmarked score against 75,000+ handpicked, verified brands which includes marketers, advertisers publishers and broadcasters across the globe.

Engagement Labs (TSXV:EL) offers intelligent social data, analytics and insights for organizations that are actively engaging on social networks. Offered as a SaaS or through an API, the eValue™ analytics platform allows brands to measure and maximize the effectiveness of their social media marketing campaigns, as well as measure that of their competitors across major social networks Facebook, Twitter and YouTube. Engagement Labs maintains offices in Montreal, Toronto and Paris. www.engagementlabs.com / www.eValueanalytics.com