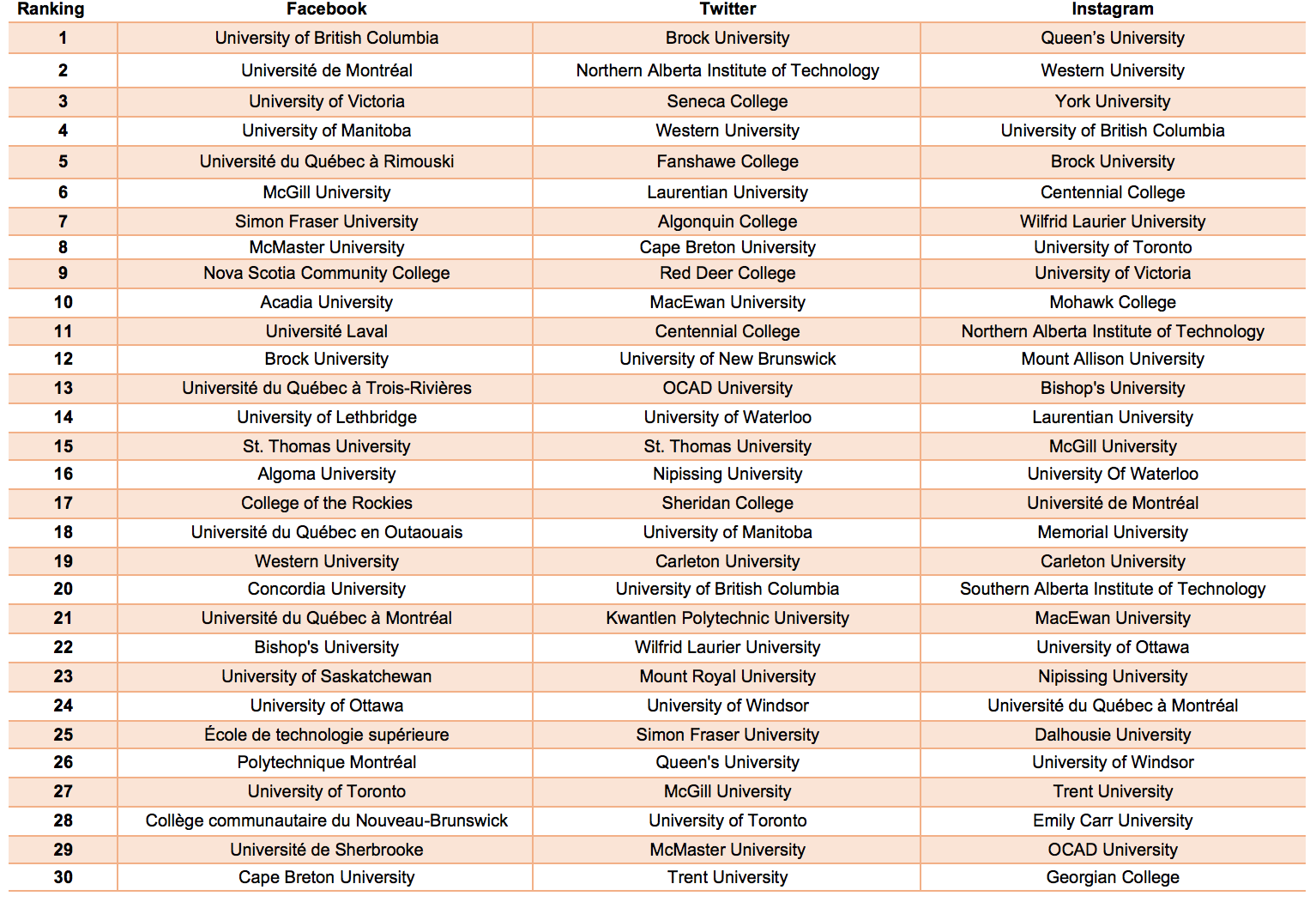 “College and university students are constantly using social media as a tool for communication and keeping up-to-date on all news. Student life has quickly adopted social media, thereby offering higher education institutions with an ideal avenue for two-way, real time communication with prospective and current students,” stated Bryan Segal, CEO at Engagement Labs. “Students are highly engaged and always want to interact with the shared content, as long as it’s compelling. Thus, this provides an opportunity for academic institutions to create content that promotes their academics and campus life, not only for its current students, but also for recruitment purposes and as a platform to engage with alumni and parents.”

On Facebook, University of British Columbia ranked first with the highest eValue score. The institution also had the largest follower growth during the time period measured, with 37,993 new followers. University of Victoria, which placed third overall, scored the highest Engagement, which demonstrates the content being posted resonated extremely well with its followers. However, it was fifth-place finisher, Université du Québec à Rimouski (UQAR) which garnered the most likes, comments and shares per 1,000 fans by its frequent posting of content that included celebrations of student achievements, highlights of extra-curricular activities and user-generated content from attending students. On the other hand, UQAR’s Impact score was relatively low compared to fellow academic institutions, hindering the school from placing higher.

On Twitter, Brock University ranked first with the highest Impact score of the top ten. Highest Responsiveness and response rate was scored by Fanshawe College. Laurentian University, which ranked sixth for overall eValue, scored the highest Engagement with posts around campus life and recognizing the successes of school alumni.

On Instagram, Engagement Labs found that all schools measured had a very high active user base, indicating that academic institutions are posting engaging and targeted content on their channels. Queen’s University placed first for overall eValue score, while the following three schools - Western University, York University and University of British Columbia - tied for the highest Engagement. All three universities utilized the visual platform to showcase their schools through images of their campuses and students. In particular, Queen’s University leveraged user-generated content from students both at the campus and beyond and tagged the student in the picture. University of British Columbia earned the most likes per 1,000 fans, while Wilfrid Laurier University ranked first for Responsiveness and University of Toronto scored the highest Impact.

“As we saw with our rankings, Engagement was high across all three channels, with online followings being highly active - particularly on Instagram. However, we found that the schools had much lower Responsiveness scores. Therefore, there is an opportunity for these academic institutions to focus on their response strategies to engage in two-way communication. Followers are turning to these channels for answers regarding all-things academic and campus life, so providing information via social media is an essential strategy for schools to build brand affinity among audiences. An effective response strategy builds relationships with students, prospects and the community-at-large,” noted Segal.