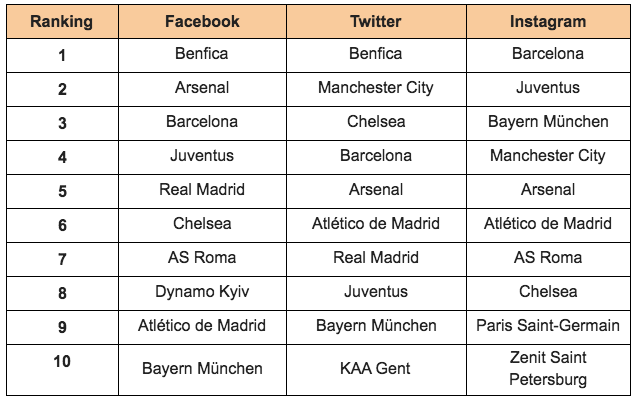 “The world’s number one sport engages fans from across the globe, and with the UEFA Champions League kicking off Round 16 this week, excitement is high.  Both clubs and sponsors are aiming to maximise performance off as well as on the pitch,” stated Steve Thomson, UK Managing Director of Keller Fay, an Engagement Labs company. “The Champions League serves as the perfect opportunity for both the teams and sponsors of the league to interact with online fans to promote their brand. Social media provides the ideal medium for fans across Europe and the rest of the world to show their support for their favourite teams, connect with other fans and follow the matches.”

On Facebook, Engagement Labs’ data found Benfica led the pack amongst all the competing teams with the highest eValue score of 92.99. Arsenal ranked second for eValue score, experiencing the largest fan growth during the time period measured, with 657,651 new fans in a four week period. Following closely behind in third place was Barcelona, whose huge global fan base helped deliver the highest Impact score of the group.

While more popular teams with extremely large followings ranked higher overall, it was eighth place team Dynamo Kyiv who scored the highest for both Engagement and Responsiveness. Scoring an impressive 96.19 for Engagement, the team also garnered the most likes, comments and shares per 1,000 fans, earning its scores by leveraging video clips of game highlights and memorable moments from the past, as well as contests for free jerseys which encouraged fan interaction. The team’s low Impact score, based on a significantly lower number of fans than the other teams, prevented a higher eValue ranking.

On Twitter Benfica ranked first for eValue score, with the highest Engagement and Responsiveness scores of the top ten, just ahead of Manchester City and Chelsea, which placed second and third, respectively. Barcelona ranked fourth overall, with the highest Impact and follower growth of the group.

“On Twitter we see each team has a significantly high Impact score, averaging in the 90s for the subcategory. However, Engagement appears to be on the lower spectrum,” continued Thomson. “With live updates from games, as well as frequent content from the teams being posted, fans can easily miss tweets due to Twitter’s real-time nature, thereby decreasing the amount of engagement being received on the channel. On the other hand, leveraging prominent hashtags around the event can both increase reach and encourage engagement among those following the event closely.”

On Instagram Barcelona ranked first with an impressive 97.84 eValue score - the equivalent of the 5-0 thrashings Barca routinely dish out. Boasting the highest Engagement and Impact of the top ten, the team posted frequently about Lionel Messi’s 2015 FIFA Balloon D’Or win, thus creating engagement among fans. Juventus placed second with an impressive 94.6 eValue score, followed closely behind by Bayern München in third place.

“Whereas the teams of the UEFA Champions League demonstrated excellent Engagement on Facebook and Instagram, the sponsors showcased different social media success,” noted Thomson. “Although the Sponsors demonstrated high Impact, Engagement scores across all channels paled in comparison.”

On Facebook, Nissan ranked first, well above the other sponsors, with an eValue score of 92.18. Scoring the highest Engagement, Nissan’s score for the subcategory was almost 60 points higher than the first  runner-up in the subcategory. Nissan also had a significantly higher active user base than its fellow sponsor brands. Adidas ranked second; however, the Company's eValue score was significantly lower than Nissan due to a low Engagement score. The brand also posted less on the channel which impacts how often fans can engage with the content. PlayStation ranked third with the highest Impact score of 94.09.

“With such high interest in football and the Champions League, it’s easy to see why the teams performed so well on social media,” said Thomson. “Being sponsors of such a high-profile event should encourage brands to associate themselves with the league. Focusing on posting content which affiliates themselves with an event with such international attention, can only help to increase engagement and improve a brand’s social media standing.”