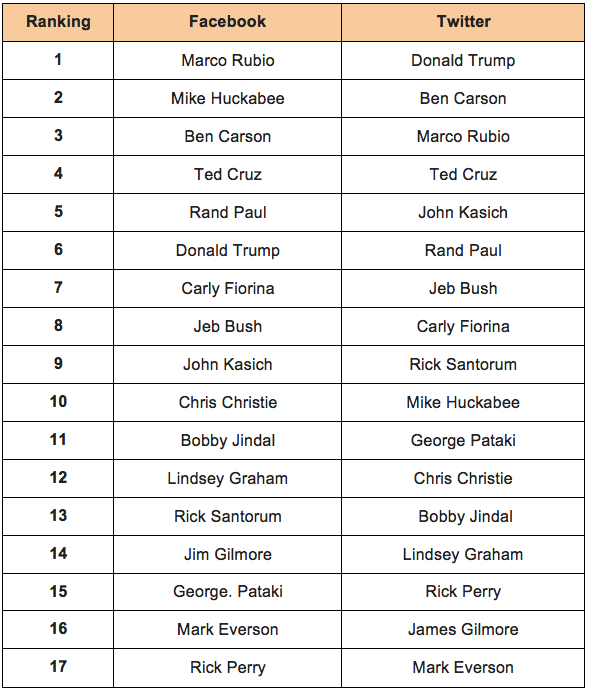 “As the 2016 U.S. presidential election heats up, social media is being utilized as a major tool for voters to show support for their favorite candidates,” said Bryan Segal, CEO at Engagement Labs. “Using the eValue tool, we see support grow week over week with certain candidates like Trump, Carson and Rubio remaining frontrunners on social media, not only through their eValue scores, but also when it comes to follower growth. The challenge the candidates face will be continuing to maintain voter attention between debates through social media activity.” 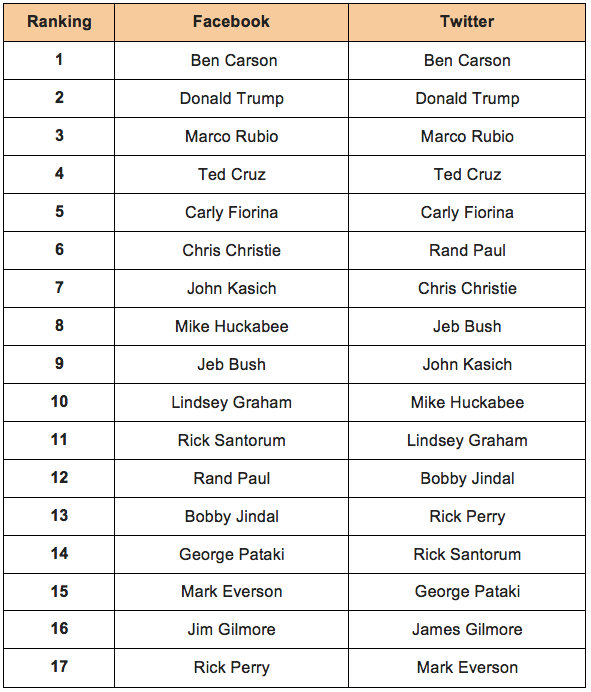 With an eValue score of 94.22, Rubio took the top spot on Facebook with Mike Huckabee, Ben Carson and Ted Cruz following close behind, all with eValue scores over 93 out of a possible 100. Although Rubio managed to have the highest Responsiveness subscore, it was Carson who excelled with the highest Impact subscore and active user base. With a major focus on his Facebook account, Carson generated the highest number of followers during the debate, accumulating 60,000 more followers than the number two ranked competitor Trump. For example, Carson’s Facebook post, “We seek your counsel Lord, for you are the answer – use these hands to heal, clear minds to receive your inspiration and wisdom, revive us,” was posted just before the debate began and received more than 223,800 likes and was shared more than 24,500 times. However, while not gaining a significant amount of new followers, Rand Paul had the highest Impact subscore of the group with a score of 94.2.

Trump, on the other hand, continued to focus on Twitter as his main social media channel for communicating with voters. He continued to dominate this channel with the highest eValue score and highest number of followers compared to all the other GOP candidates. During the debate, Trump garnered more than 7,700 new followers. However, again Carson managed to overtake Trump in new followers, more than doubling that of Trump’s follower growth. Carson is not only gaining momentum in the polls, but is continuing his momentum on social media. He also tweeted the same post he shared on Facebook before the debate, and garnered more than 4,600 favorites and 2,200 retweets. As Carson develops a social media strategy that is targeted towards a specific audience, he is continuing to see momentum on his social channels.

The real surprise on Twitter was John Kasich, who is not a frontrunner on the campaign trail, but managed to develop a small but very active follower base. Although he gained less than 1,500 followers during the debate, he garnered the top Engagement subscore of 82.94. This indicates that while his audience may be small, they are engaged in the content he shares.

Rubio remained in third place on Twitter for both the eValue ranking and follower growth, gaining only 600 followers less than Trump. As seen from the second Republican debate, Carly Fiorina continues to climb her way up the social media ladder ranking fifth for follower growth. Additionally, Cruz created attention during the night for calling out the moderators on unfair questioning. He ranked fourth in Engagement Labs’ eValue score and gained more than 4,200 new followers. Cruz’s content had great potential reach as he had the second highest Impact subscore of the group. He not only gained attention on air for his comment about the unfair moderators, but his tweet, “How about we talk about the substantive issues the American people care about? #CNBCGOPDebate,” received more than 2,300 favorites and 1,500 retweets.