Despite boycotting the GOP debate, Donald Trump managed to maintain his dominance on Twitter by hosting an event to raise money for veterans, during the same time as the Fox News debate. While, Ben Carson lost his standing lead on Facebook, with Ted Cruz coming in at number one. 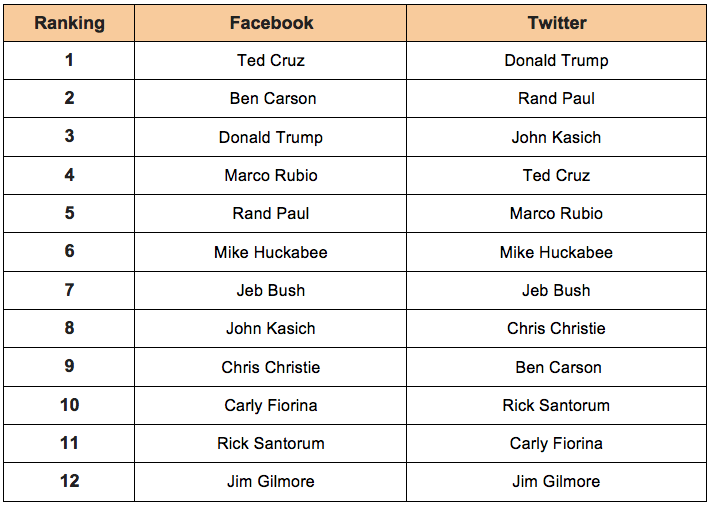 “Taking a page out of Rand Paul’s book from the last Republican debate, Trump boycotted the Fox debate and despite not being part of it, his social media presence remained strong. In fact, Trump still managed to gain the highest number of new followers on both Facebook and Twitter than any other candidate,” commented Bryan Segal, CEO at Engagement Labs. “By highly leveraging Facebook and Twitter leading up to and following the veteran charity event he organized, Trump was able to stay top of mind among the American public and increase his social media following and engagement among fans.”

Top Five Rankings of Highest Follower Growth for Republican Candidates on Facebook and Twitter Based on the January 28, 2016 Debate:

On Facebook, Engagement Labs’ data found that Cruz had the highest eValue score - overtaking Carson, a regular front runner on the channel. With Trump out of the debate, much of the attention was put on Cruz, which positively impacted his Facebook ranking through an increase in engagement among fans. Cruz garnered one of the top Engagement scores and his content also saw a higher number of comments and shares per 1,000 fans than Carson. Carson however, continued to maintain a higher Impact score with a following of more than four times the following of Cruz.

Trump took the top ranking for highest Engagement score, along with highest active user base of all the candidates. He also gained the most number of likes per 1,000 fans, receiving more than 67,900 likes on a single post that announced the six million dollars raised for veterans during his event. Trump gained 17,049 new followers on Facebook, while Cruz gained the second highest number of new followers, trailing behind at 3,397.

“Trump’s decision to boycott the debate could have possibly hurt him in the polls, but on social media he managed to continue to create conversation around his campaign, attract followers and maintain dominance on the channel,” noted Segal.

Social media continues to be a prominent platform for candidates to leverage during the debates, especially for the opposing party. In last night’s debate, two different strategies from the Democratic candidates were demonstrated. For example, Hillary Clinton live tweeted the debate which resulted in earning 8,006 new followers on the channel. Bernie Sanders engaged Iowa residence and hosted a local Town Hall which enabled him to gain 6,157 followers on Twitter and an impressive 11,233 new followers on Facebook.