Leading up to the debate, both Ben Carson and Donald Trump were the frontrunners on Facebook and Twitter, respectively. Both candidates were able to maintain their lead generating the highest eValue scores following last night’s debate. 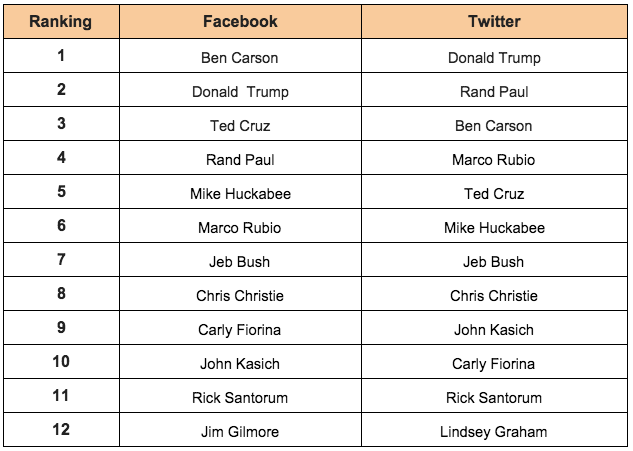 “Presidential candidates continue to leverage social media as an online platform to voice their opinions and address hot-button issues. What we’re seeing as the Presidential race enters into the new year, is that candidates are starting to use the platforms in more creative ways, which ultimately helps candidates such as Rand Paul, Marco Rubio and Ted Cruz compete with popular online candidates like Trump and Carson,” said Bryan Segal, CEO at Engagement Labs.

Rankings of Highest Follower Growth for Republican Candidates on Facebook and Twitter Based on the January 14, 2016 Debate: 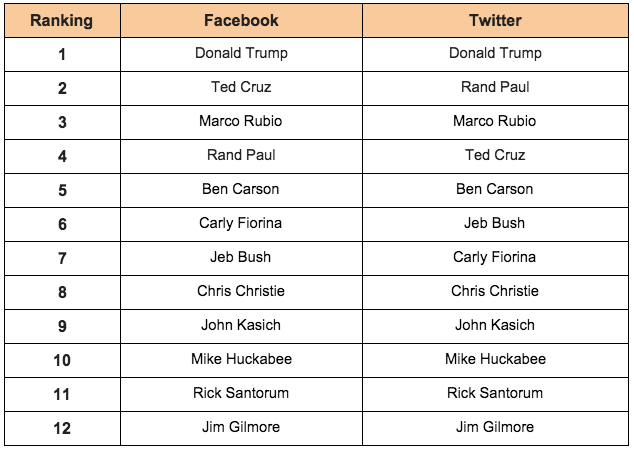 On Twitter, Trump continues to lead the pack with the highest eValue score, along with Engagement and Impact scores. Trump also saw the highest number of likes and retweets on the channel. Rand Paul, despite not participating in this week’s primary debate, managed to secure second place on Twitter. Posting directly from Twitter headquarters, Paul generated plenty of online buzz by boycotting last night’s debate and instead holding a Q&A session titled #RandRally. His efforts to engage voters online allowed him to garner the second highest number of new followers, behind Trump. Carson, secured a third place ranking, frequently posting points from his debate regarding military and the Supreme Court, accompanying each post with the trending hashtag #GOPDebate.

However, Democratic party candidate Hillary Clinton generated a larger fan growth than any Republican candidate, besides Trump, with 5,599 on Facebook and 8,891 on Twitter.

“While social media has proven to be beneficial to candidates participating in the debates, it’s also proving to be an extremely useful for the opposing party. As we saw yesterday, Hillary Clinton live-tweeted during the debate to call out topics and points made by Republican candidates, helping to grow her following significantly and solidify her positions on various topics,” noted Segal.