Social media is a great opportunity to extend brand affinity and loyalty with content providers.

The company ranked the top social media publishers- companies that consistently issue new content distributed online and via social media- based on the findings of its eValue™ tool - the global benchmark for social scoring- by leveraging more than 300 conventional social media metrics together to provide a single comprehensive and benchmarked score for marketers, advertisers and broadcasters across the globe. The tool’s three key metrics are Engagement, Impact and Responsiveness.

According to the eValue data, the Top 10 publishers in each country are as follows: 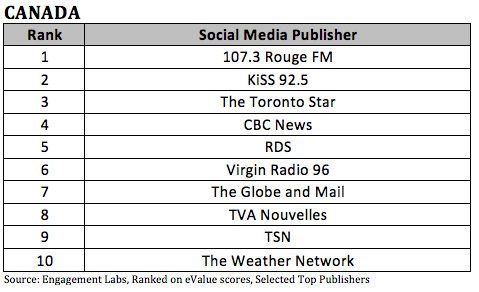 The American and Canadian lists showcased similar behaviours on social media, with the top 10 social publishers in each country scoring highly on Engagement and Impact. Engagement scores were extremely high as publishers focused on building engaging content, while Impact scores were similarly high as publishers demonstrated an ability to produce content that spreads widely across the social channels. In contrast to these higher scores were the low Responsiveness scores that publishers in both countries displayed. Responsiveness is a score that measures reactivity, or the quantity and the quality of a company’s answers to their engaged fans. A low score represents an abundance of missed opportunities to further engage directly with customers and build a relationship with their audience.

"The top-ranking publishers in North America have successfully evolved their content to be social at the DNA level.  The content they’re publishing generates conversations that live on their own pages, and also extend out into the social web, affecting the zeitgeist in their topical areas." said Eli Singer, CMO of Engagement Labs.

Both countries had two sports properties score in the top 10. The two in Canada were Bell Media properties RDS and TSN, and the two in the US were Fox Sports and the NFL on ESPN. These publishers resonated with their fans through content, personalities, news reports and highlights.

A clear differentiator between the two lists was that 3 of the top 6 properties in Canada were Radio Station extensions. Canadian radio stations used their social channels as an opportunity to continue the conversation and garner loyalty among their listeners. In the United States, broadcast networks dominated the rankings with ABC 7, CNN, Good Morning America and The Food Network all placing in the top 10. The powerful integration of social media and TV is seen in Canada as well, with TVA Nouvelles and The Weather Network landing at the top of the rankings.

“These Top 10 rankings prove the importance that top publishers place on expanding their reach beyond their primary media channel, be it radio, print or television. Social media is a great extension for these publishers, extending their customer loyalty, reach and frequency. Using social networks allows these publishers to drive new users to their content, increase loyalty amongst their current audience, and drive greater frequency to their content, all in all allowing for potent opportunities to further monetize their assets." said Bryan Segal CEO of Engagement Labs.

Engagement Labs (TSX VENTURE:EL) offers intelligent social data, analytics and insights for organizations that are actively engaging on social networks. Offered as a SaaS or through an API, the eValue™ analytics platform allows brands to measure and maximize the effectiveness of their social media marketing campaigns, as well as measure that of their competitors across major social networks Facebook, Twitter and YouTube. Engagement Labs maintains offices in Montreal, Toronto and Paris. www.engagementlabs.com / www.eValueanalytics.com