The Social Media Grammy Goes to Artists – The Weeknd and Taylor Swift, and Sponsors – People Magazine and Gucci

TORONTO, Ontario — February 16, 2016– Technology and data company Engagement Labs, creator of eValue Analytics™ score, today released rankings of the top performing Grammy-nominated Artists in the Song of the Year, Album of the Year, Record of the Year and New Artist of the Year categories and top ranked Grammy Sponsors on social media according to eValue data. 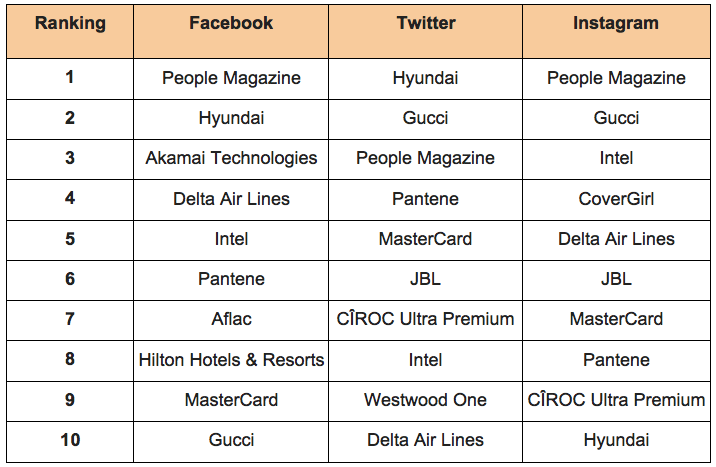 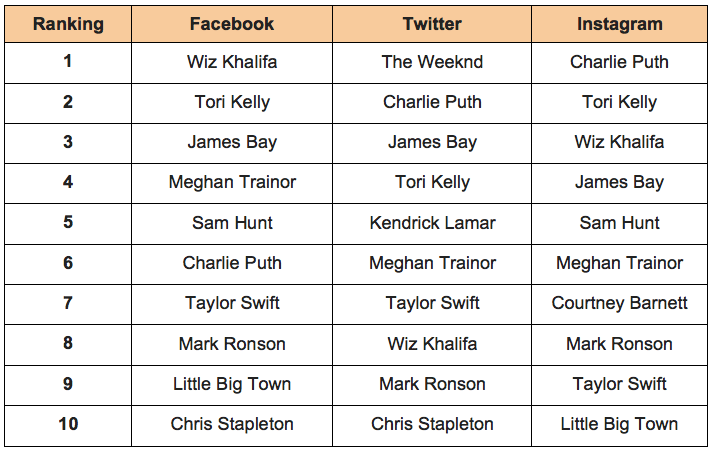 “The Grammy’s is the music event of the year bringing together artists from across music genres onto one stage. With major sponsorship dollars behind the event, sponsors feel the pressure to stand out among the pack to gain viewer attention,” said Bryan Segal, CEO at Engagement Labs. “As TV screen coexists with smart phones, laptops and tablets, social media is a prime medium for sponsors to leverage during the event to convey their message to key audiences.”

Performing extremely well on Facebook, People Magazine ranked first for its overall eValue score and had the highest Engagement and Impact scores. People Magazine also boasted the most active user base of all the sponsors. The Magazine posted frequently leading up to the Grammy’s with news about the show, as well as reporting live updates leveraging its event association.

According to Engagement Labs’ Facebook data, Hilton Hotels had the highest follower growth of the night with 972 new followers. The Company posted live video and images of artists like Taylor Swift on the red carpet in front of a step-and-repeat with the Hilton Hotel logo. The hotel chain also had one of the highest Responsiveness scores, demonstrating the company's focus on customer service.

On Twitter, Hyundai scored the highest eValue score and the highest Responsiveness score of the top ten sponsors. Gucci leveraged the channel to post images from the red carpet of nominee Florence Welch wearing a Gucci dress. Gucci garnered second for overall eValue score and the second highest Engagement. The high fashion luxury brand also gained the most followers with 5,039 new fans. Highest Engagement score was secured by CÎROC Ultra Premium which leveraged the #GRAMMYs hashtag leading up to and during the event to interact with fans and ask their opinions on who they thought would win. People Magazine placed third with the highest number of tweets and the highest Impact score.

On Instagram, People Magazine once again reigned with the top eValue score. The entertainment news outlet posted several times about the Grammy’s leading up to and during the event leveraging the #GRAMMYs hashtag to generate the most likes and comments per 1,000 fans. Gucci ranked second with the highest Impact score and again had the highest follower growth with an impressive 11,687 new followers. Intel and Lady Gaga partnered to create a tribute to the late David Bowie. The Company leveraged the #GRAMMYs hashtag along with its own #INTELinMUSIC, garnered the third highest eValue score on the channel.

“While sponsors leveraged its association with the awards show to generate online engagement with fans, artists took a similar approach - particularly the day of the Grammy Awards. Fans were able to celebrate with their favorite artists and show their support through online interaction before and during the event,” continued Segal.

On Twitter, the winner of Best R&B Performance, The Weeknd, scored the highest for eValue and Engagement scores. Tweeting at the Grammy’s official account, The Weeknd thanked everyone for their support after his win and for the incredible night, which helped to generate the highest Engagement among all the artists. Charlie Puth earned second place with the most active user base and highest retweets and likes per 1,000 fans. Third place finisher, James Bay, scored the highest Responsiveness score, while Taylor Swift and Wiz Khalifa tied for highest Impact. Album of the Year winner, Taylor Swift, tweeted throughout the show posting reactions to her Grammy wins and to engage with fellow artists through the platform. Swift managed to grow her following significantly during the show with 67,701 new followers.

On Instagram, Charlie Puth dominated with the highest eValue and Engagement score. Tori Kelly followed in second place, while Wiz Khalifa placed third with the highest Impact score. Taylor Swift once again gained the most followers with a significant increase of 121,549 new followers. The artist shared her red carpet look and a video reaction to her video Bad Blood winning a Grammy, on the channel.

“During the awards show, Taylor Swift utilized her social media channels to post her reaction to winning certain awards, show her red carpet look and interacted with other artists particularly on Twitter. Her shining success and her live-updates resulted in the artist gaining a massive number of new followers on both Twitter and Instagram the day of the awards show. Swift’s online success highlights the striking impact that actively engaging with a high-profile event can have on the growth of one’s online social channels.”