The Social Media Award Goes To… The Revenant, Joy and Empire Are Among The Top Performing Golden Globe Nominees on Social Media

eValue Rankings of The Golden Globe Nominated Motion Pictures in the Drama and Comedy Categories:

eValue Rankings of The Golden Globe Nominated TV Series in the Drama and Comedy Categories: 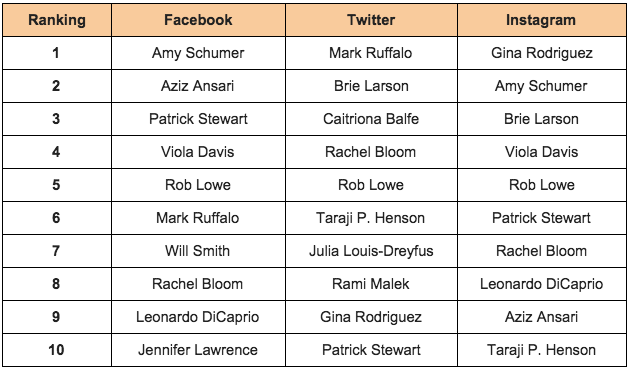 “The use of social media channels to promote films and TV programs can generate significant online buzz. With more people choosing to utilize a second screen and follow live television events such as award shows online, there is no question that these films and TV shows should leverage its social media channels to further engage audiences,” said Bryan Segal, CEO at Engagement Labs. “A Golden Globe nomination can generate media pickup and send people into the theatre, increasing box office revenue. Along the same lines, a strong social media strategy can engage followers, create conversation and build hype, especially during the awards season.”

The Revenant, took home the Golden Globe for Best Motion Picture Drama and Best Performing Actor in Drama. It also demonstrated a strong social media presence, ranking number one on Facebook with the highest eValue and Engagement score. The movie also gained the highest number of followers on Facebook, adding more than 10,000 fans during the day of the telecast. The Revenant also ranked second on Twitter and Instagram for overall eValue score, and gained the highest new following on both channels, as well.

Joy, ranked among the top five in all three categories for motion pictures, taking the top spot on Instagram with the highest Engagement and Impact scores. The movie also had the highest active user base, meaning the highest percentage of people who follow the channel and also actively engage with it through comments and likes. Posting content more frequently than its competitors the movie’s Instagram content highlights the star-studded cast including images of Golden Globe Best Actress winner Jennifer Lawrence. A post congratulating Lawrence on her Golden Globe win garnered over 1,500 likes within an hour.

In the Television category, Empire garnered the top eValue scores on both Facebook and Instagram and came in fifth place on Twitter. On Facebook, Empire had the highest Impact score and second highest Responsiveness score, demonstrating the show’s dedication to fans through actively building two-way conversation. On Instagram Empire gained 5,887 new followers, the highest follower growth for a TV show during the day of the Golden Globes. The show’s Instagram channel posted a picture of Best Actress winner, Taraji P. Henson, in her Golden Globe gown garnering over 28,500 likes.

Outlander, took the top spot on Twitter along with the highest Engagement score. Although the show has a smaller following than both Empire and Orange is The New Black, their fan base is active and engaged in the content posted, which is attributed to the show’s high eValue score. Outlander has the highest number of Likes and Mentions per 1000 fans of the top five TV shows ranked.

Comedy is all about the laughs and on Facebook laughs translates into high eValue scores when looking at the top actors. Comedians Amy Schumer and Aziz Ansari come in at first and second place, respectively. Schumer has an extremely active user base and posts content more frequently than her fellow actors. As an actor being true to your brand and understanding your fan base is critical to social media success. Schumer has leveraged humor to tap into her audience base to create engagement and increase her impact among her loyal followers.

Along with winning the Golden Globe for Best Actor for his role in The Revenant, Leonardo DiCaprio also ranked among the top ten actors on Facebook and Instagram in the eValue rankings. Although DiCaprio was not able to gain the top social media spot, he managed to garner the highest fan growth during the day of the awards show, gaining 8,936 on Facebook and 37,620 fans on Instagram.

“Actors have a huge online influence and many film and TV studios are making use of their stars’ online impact to engage their audiences. For example, Best Actress nominee Gina Rodriguez, took the top eValue ranking on Instagram. Rodriguez frequently posts on Instagram and leverages the channel to promote upcoming episodes of her show Jane the Virgin. While Empire, is a great example of a show that has leveraged social media channels to engage audiences by creating humorous GIF images and frequently posting images on Instagram of cast members behind the scenes to give followers an insider view. These tactics are translating extremely well both online and in week-to-week audience viewership,” noted Bryan Segal.