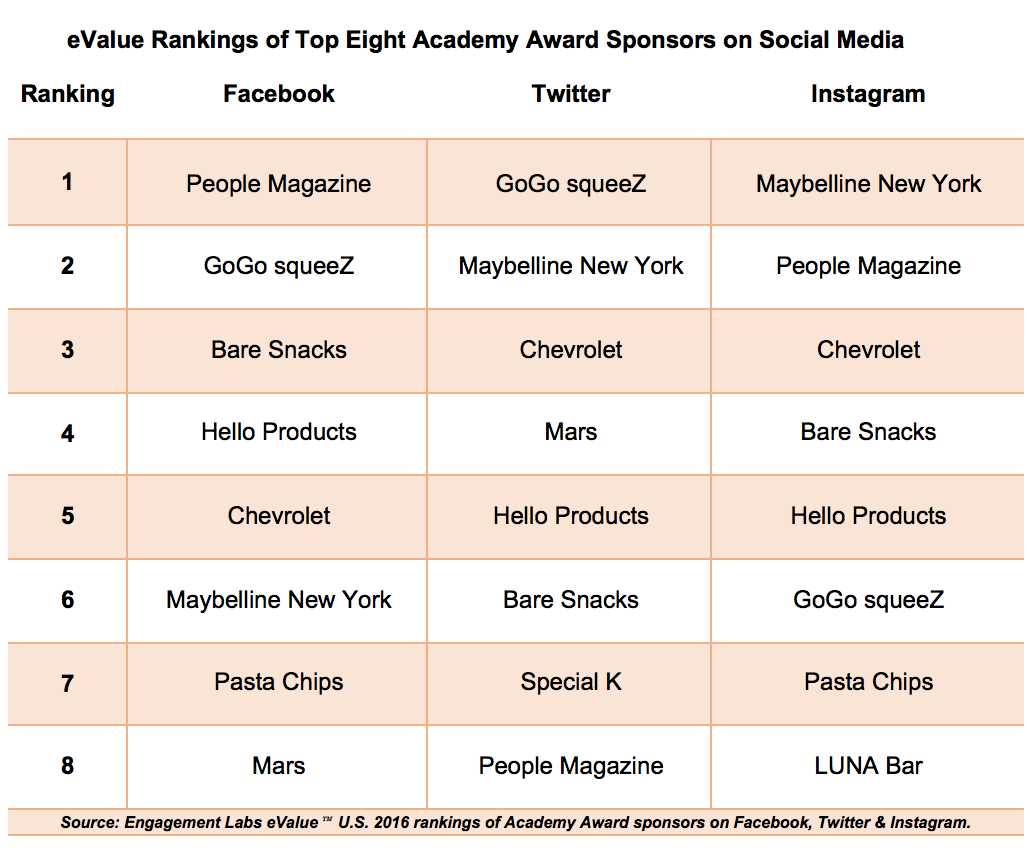 “The Academy Awards serve as the largest event of the Hollywood awards season. With millions of viewers tuning in to watch Tinsel Town's biggest night, sponsors spend millions of dollars to get in front of the audience,” said Bryan Segal, CEO at Engagement Labs. “With awards show viewership no longer relegated just to the TV screen, audiences are using social media to post live-reactions and discuss buzzworthy moments during the telecast. As a result, social media offers the perfect opportunity for sponsors to capture audience attention and share of voice.”

On Facebook, People Magazine ranked first with an impressive overall eValue score. The entertainment news outlet also scored the highest Engagement and Impact score of the Academy Award sponsors. Snack food brands, GoGo squeeZ and Bare Snacks placed second and third, respectively. Bare Snacks leveraged its Oscars association by posting an image of an Academy Award made up entirely of one of its snack foods, generating one of its most engaged posts. Highest Responsiveness was scored by fellow food brand Pasta Chips.

On Instagram, Maybelline New York ranked first with the highest eValue score. Scoring the highest Engagement and Impact scores of all sponsors, the brand also boasted the most likes per 1,000 fans on the visual platform. People Magazine came in second with the most active user base of the group, with its posts regarding Leonardo DiCaprio’s Oscar win and red carpet appearance with Kate Winslet, generating more than 20,000 likes each. Fifth-place finisher, Hello Products, scored the highest Responsiveness once again.

“As sponsors aim to turn association with The Oscars into increased sales, the films nominated for Academy Awards look to  increase box office revenue. Critical acclaim during the award season is extremely beneficial for any film as it raises curiosity amongst audiences, leading them to theaters. As a result, social media provides Best Picture nominees the perfect medium to leverage the critical acclaim and drive additional viewership,” continued Segal.

On Twitter, Room scored the highest eValue score while also generating the highest Engagement score and most mentions per 1,000 fans of the Best Picture nominees. Second place went to The Revenant with the film’s most engaged post being a celebration of Leonardo DiCaprio’s first Oscar win. Best Picture winner Spotlight placed third with the most number of retweets and likes per 1,000 fans. The Martian, which placed fifth for eValue, scored the highest Impact.

“Based on the reactions of online audiences, films which experienced Oscar success saw  success reflected in one way or another on its social channels. Viewers are tuning in to these awards shows to see their favorite films and artists prevail, so when there is an achievement, this can easily translate into online success. Thus, by attaching oneself to such a mass-media event, brands and films have significant opportunity to drive sales,” noted Segal.