The Online and Offline Reign of Scream Queens Continues, While The Muppets Audience Chitchat Is Turning Negative

Scream Queens continued to dominate the online conversation on Facebook, Twitter and Instagram for the third week in a row. Scream Queens and Quantico have moved up in the rankings creating a three way tie for first place with The Muppets for most word of mouth conversations. 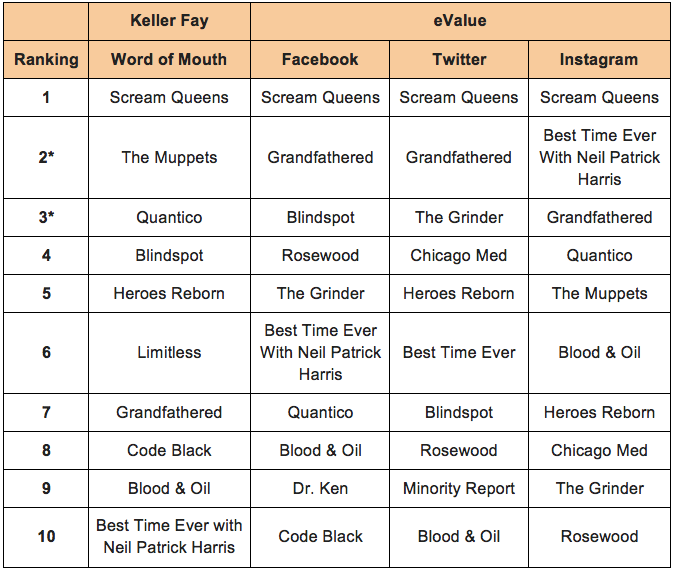 "In its third week on-air, Scream Queens is continuing to see momentum both online and offline," said Ed Keller, President at Engagement Labs and CEO at Keller Fay. "Social media has created the rise of the second screen and according to Nielsen data, increases in conversation on Twitter during live programming signal that there is high engagement among the general viewing audience. We are seeing this correlation with Scream Queens, as it remains at the top of conversation rankings both online and around the water cooler."

Quantico, despite coming in first place for word of mouth conversation and moving from number six to number one among the most talked about new fall TV shows for men, remained in seventh spot in its eValue ranking on Facebook. The show also fell from sixth to eleventh on Twitter, with a decrease in eValue score of more than 15 points.

"Quantico is seeing a much higher active user base on Facebook than on Twitter. However, the show does not respond to fans at all on Facebook. With a much more active audience on the Facebook platform, the show should begin engaging with fans on Facebook to further drive engagement and increase overall eValue score," noted Keller.

For more information on the rankings or to receive the full data set please contact -Jessica.Dellaquila@engagementlabs.com

Engagement Labs (TSX VENTURE: EL) offers intelligent 'Total Social' data, analytics and insights for marketers and organizations enabling them to track, measure and benchmark the conversations happening around their brand or industry both online and offline. These conversations are proven to drive critical business outcomes, including sales, while Engagement Labs' tools provide data and actionable insight to help guide business decisions and power marketing effectiveness.

Engagement Labs' eValue™ Analytics tool is the global benchmark for social media scoring. eValue's proprietary data technology offers real-time analysis to measure a brand's social media and digital marketing efforts, distilling it down to a single meaningful number between 0 and 100 -- an eValue score. Composed of a series of metrics and Key Performance Indicators (KPIs), an eValue score measures social media Engagement, Impact and Responsiveness which is benchmarked against 100,000+ handpicked and verified brands. The Keller Fay Group, an Engagement Labs company, is the only firm to regularly measure offline conversation, which independent research finds is a significant driver of sales with twice the impact of online conversation.