Engagement Labs Ranks the Social Media Performance of the 2015 U.S. Blockbusters During the Holiday Weekend

TORONTO, ON – January 5, 2016 – Technology and data company, Engagement Labs (TSXV:EL), creator of the eValue™ score, today released rankings for the top 2015 U.S. blockbusters on Facebook, Twitter and Instagram during the holiday weekend. 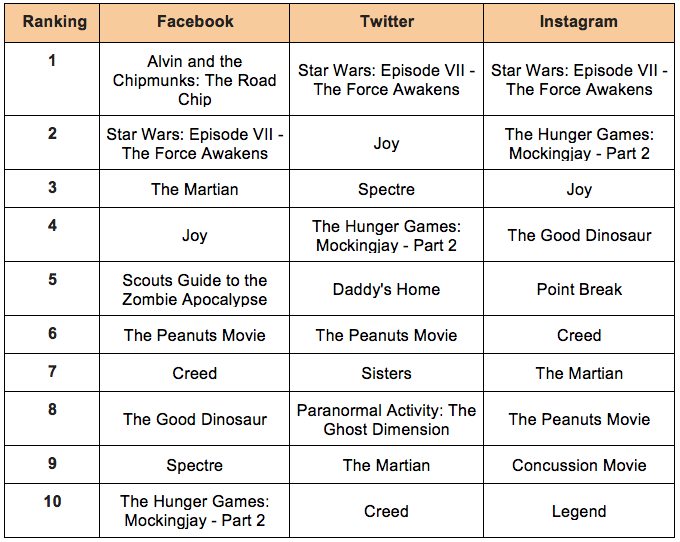 “The holiday season is always one of the busiest for the film industry with studios releasing some of the biggest blockbusters of the year and movie-goers hitting the theatres during their time off,” stated Bryan Segal, CEO at Engagement Labs. “To create buzz and excitement, films turn to social media as it’s an ideal avenue for promotion, which can lead to an increase of box office sales. Therefore, it’s no surprise that we found social media activity for these films were highly active during the holidays with audiences turning to online mediums to discuss the latest films.”

On Facebook, Alvin and the Chipmunks: The Road Chip ranked first with the highest eValue score and the largest fan base of the top ten films. The film leveraged its near-Christmas release date by posting content that combined references to the holiday and promotion of its arrival in theatres. However, Star Wars: Episode VII - The Force Awakens, which broke box office records, ranked second place on Facebook for overall eValue score. The movie also garnered the highest Impact score and the largest follower growth over the timeframe measured.

Joy used its Facebook page encouraging users to watch the film in theatres by posting content that included a link to purchase film tickets. The move ranked fourth for eValue score with the highest Engagement score. Additionally, Joy had the most active user base and the highest number of likes per 1,000 fans.

On Twitter, box-office winner Star Wars, dominated with the highest eValue score as well as Impact and Responsiveness scores. The film promoted content such as movie stills, film clips and images from world premieres and experienced the largest follower growth of 84,637 during the holiday week. Joy came in second for overall eValue score and leveraged the same strategy as the film’s Facebook page, sharing links to buy tickets at a local theater. It also scored the highest retweets and favorites per 1,000 fans of the group, despite having significantly less fans than Star Wars.

On Instagram, Star Wars surpassed the competition to rank first for eValue score and Impact. With the largest fan following and highest follower growth of an impressive 297,104 fans during the weekend, the film’s highly active user base interacted frequently with the film’s content showcasing behind-the-scenes images of the film. Jennifer Lawrence-helmed films, The Hunger Games: Mockingjay - Part 2 and Joy, placed second and third for eValue score, respectively. Joy had an impressive score for Engagement by posting the most content during the weekend, which included images of the film’s star. The film showcased the most active user base and the highest number of likes per 1,000 fans.

“With the latest Star Wars movie having built buzz for the last year via social media, the film has seen successful returns on its online fan engagement as the film continues to destroy box office records,” continued Segal. “Joy and Alvin and the Chipmunks scored well in terms of fan engagement, which indicated that posting content that resonates with followers will really help to engage fans and increase brand affinity, ultimately driving sales.”