The Battle of the Small-Screen: MSNBC and E! Take the Top Spots on Social Media

TORONTO, Ontario – June 3, 2015 – Technology and data company, Engagement Labs (TSXV:EL), creator of creator of eValue Analytics™ and the eValue™ score, today released data rankings on the top 50 U.S. TV networks based on their social media performance on Facebook and Twitter.

Social media has become an essential part of the broadcast television experience. Networks use social media to keep their audiences informed on programming and brands are increasingly looking to networks to offer social media integration as added-value with their TV buys. Twitter, the juggernaut of real-time conversation, is a staple for live tweeting shows and events, and second-screen experiences are gaining in popularity every season. 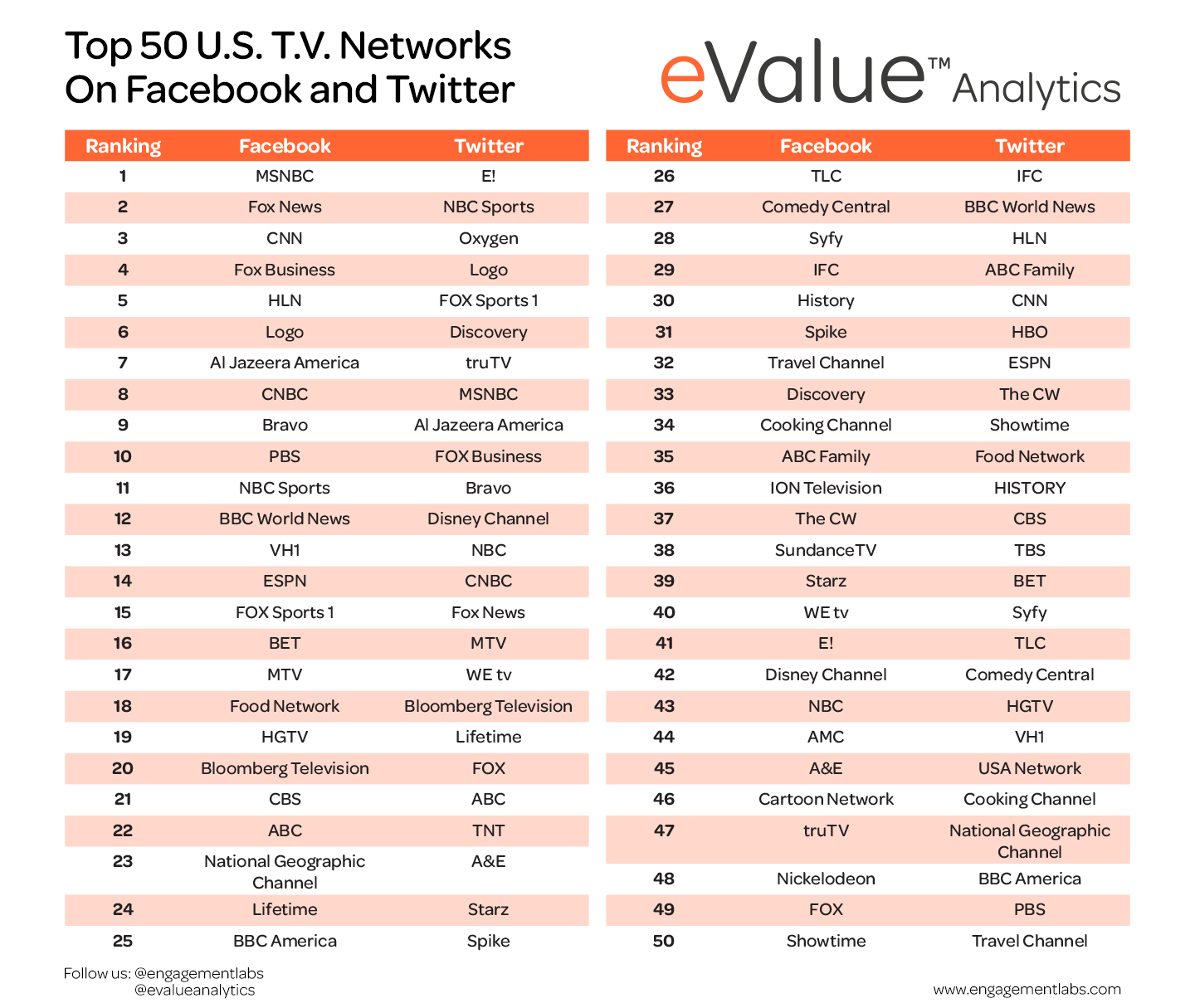 “The television landscape has changed with the advent of DVRs, On-Demand, digital media players and online streaming. Viewers’ attention spans are shortening and their eyes are moving away from the TV screen to tablets and smartphones where they’re engaging on social media. Networks are adapting to this evolution by developing social campaigns that act to complement their on-air broadcasts and further engage their audiences,” said Bryan Segal, CEO of Engagement Labs.

According to a recent PEW Research Centre study, Facebook has become a news powerhouse with about 30% of the general population getting their news from social sites. This becomes especially evident when Engagement Labs looked at the top TV networks list for Facebook, as seven of the top ten networks all cater to news content and leverage on-air content through their Facebook channels where their audience can then interact with shares, likes and comments. Whereas the top networks on Twitter show a range from sports to entertainment to regular programming. This can be attributed to how audiences engage with certain content, such as live tweeting a sports game, special event or show using hashtags that are promoted through on-air content.

“Networks – particularly those with content available On-Demand or via streaming services – are using social media to cultivate their relationship with current viewers, as well as grow their audience through social word-of-mouth. Social media has such an intertwined relationship with television that shows are often saved from being cancelled through fan-created social campaigns. For ad buyers, sometimes a smaller-but-loyal audience can be even more attractive than a show with the highest ratings and social can help identify these engaged audiences,” continued Segal.