NEW YORK, NY (October 17, 2017) – Tesla Motors is proving to be a tough competitor for other luxury automotive manufacturers, while Toyota further solidifies its dominance among mass market brands. In Engagement Labs’ latest ranking of social influence among automotive brands in the U.S., within the last six months, Tesla raced ahead four spots to capture the number two position, while Toyota jumped two spots to take third place. Overall, luxury and sports car brands continue to dominate the list, while larger domestic brands such as Chevrolet, Ford and Jeep struggle to make the top 10.

The analysis, which is a follow up to the Company’s first ranking in April 2017, is based on Engagement Labs’ proprietary TotalSocial® data and analytics, which continuously measures the most important drivers of brand performance in both face-to-face and social media conversations. The brands in the top 10 have earned the highest TotalSocial scores in the category for the last six months. 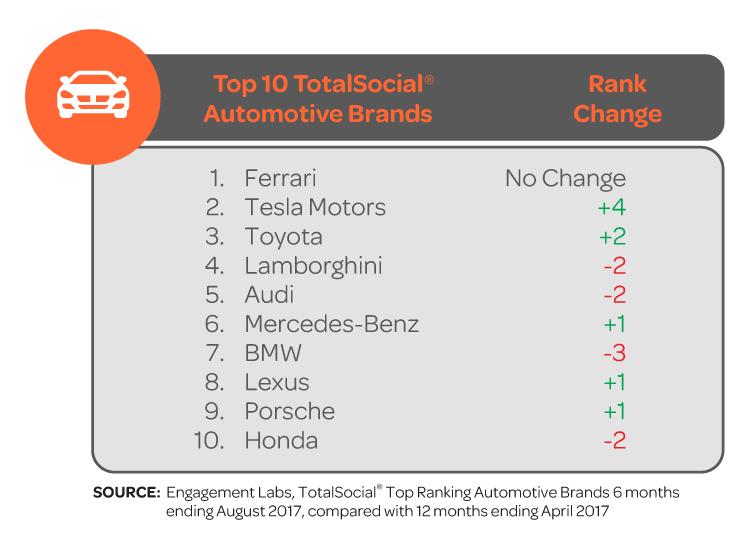 Previously ranked at six, consumer engagement for Tesla climbed, along with its stock price, during this period as the company rolled out its first mass-market car, the Model 3, with a splashy live-streamed launch party. This contributed to its strong offline influence score–which means there is an influential audience advocating on behalf of the brand–and its number two rank in offline sentiment, indicating that consumers are talking positively about the brand. With no advertising budget, Tesla has leveraged its image as an innovator disrupting the automotive industry. The company’s connection with influencers and its talk-worthy innovations, combined with its new product launch, have charged consumer conversations, as evidenced by its high scores.

Toyota generally saw improvement in its scores across the board, but it had a much stronger performance in its online sentiment and online influence scores compared to six months ago. Tesla’s and Toyota’s rise comes at the expense of Audi and BMW, which dropped two and three positions, respectively. Meanwhile, Honda remained in the top 10 but dropped two spots.

“The automotive industry continues to perform better offline than on social media,” said Ed Keller, CEO of Engagement Labs. “The ability to drive consumer conversation offline and online has a powerful impact on sales, and automakers aren’t yet harnessing the full potential of social influence.”

Keller added, “Our analytics demonstrate that brand conversations greatly influence, and are predictive, of consumer sales. These brands are missing an opportunity to optimize their performance, but they can become ‘Conversation Commanders’ by creating campaigns that encourage more brand sharing online and that cultivate online influencers. In doing so, they have the potential to increase sales by several percentage points.”

BMW’s declining scores illustrate how even the most established luxury auto brands can be vulnerable to innovative new competitors and the consumer’s changing idea of luxury.

Other brands, such as Kia and Ford, did not make the top 10 ranking, but still performed very well in certain metrics. For example, Kia boasts the highest overall online score, which is driven by an online sentiment score that far surpasses most of its competitors. The automaker also has led J.D. Powers Initial Quality Study for the last two years. Ford, which didn’t make the top 10 either, has the highest volume scores, both offline and online, in the category.

To learn more about Engagement Labs or its TotalSocial insights, and how to increase your brand’s word of mouth in real life and online, reach out at: totalsocial@engagementlabs.com.

About Engagement Labs
Engagement Labs (TSXV:EL) is the world's first TotalSocial® company, offering intelligent data, analytics and insights for marketers. We are leaders in tracking, measuring and benchmarking the impact of conversations happening around a brand and industry – both online and offline. Consumer conversations are a proven driver of critical business outcomes, including sales. The patent pending TotalSocial data solution provides brands with unique insights and powerful analytics to understand online and offline social impact and drive business results. TotalSocial demonstrates to marketers how their online and offline conversation compare and contrast and helps identify areas of competitive opportunity or significant emerging threats. TotalSocial is an “always-on” proprietary scoring system, based on the most important drivers of brand performance: Volume, Sentiment, Brand Sharing and Influence. TotalSocial was built on the pillars of Engagement Labs’ patented social media measurement tool and the world’s only offline word of mouth tracking system for brands and tracks 500 brands within the U.S. across 17 major industry categories, and 350 brands in the UK.