TD Canada Trust Ranked Number One on Social Media, while BMO Financial Group and Scotiabank See its Investment in Fans Pay Off

TORONTO, ON – November 5, 2015 – Technology and data company, Engagement Labs (TSXV:EL), creator of eValue Analytics™, today released a six-month analysis on the eValue rankings for the top Canadian retail banks on Facebook and Twitter. 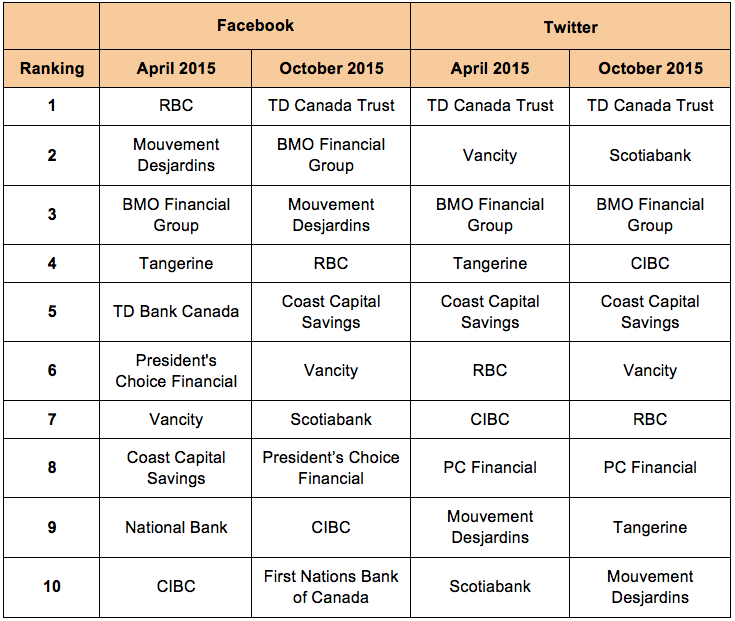 “With customers turning to banks for very personal reasons, like saving for future investments or paying off debts, customers need to feel like they can trust their bank which is not always an easy task for consumers,” noted Bryan Segal, CEO of Engagement Labs. “In the last six months, we’ve seen Canadian retail banks focus on shedding their rigid and corporate feel to humanize their brand by focusing on interacting directly with their customers on social media to build trust and brand affinity.”

On Facebook, TD Canada Trust had an impressive increase in ranking from fifth place to first. They were also the most responsive brand, scoring 80.86 out of a possible 100. They created a successful social media strategy that separated itself from the crowd by responding directly to individual fan comments and questions with the administrators signing off with their name. This approach has personalized the brand, helping to drive not only customer engagement, but also overall eValue score.

Meanwhile, BMO Financial Group, previously ranked in third place, managed to increased one spot to second place. The brand’s increase in eValue score and ranking can be credited in part to their increase in Responsiveness.

“In the last six months, we have seen Responsiveness scores – one of the three sub categories we measure in determining social media success – of Canadian retail banks increase, with the group average on Facebook improving from our last ranking six months ago,” continued Segal. “Speaking directly to customers online replicates the in-bank experience and allows customers to feel as though their business is appreciated. We see this extensively on Twitter, where Canadian retail banks are interacting directly with followers in real-time.”

On Twitter, TD Canada Trust remained in first place scoring the highest with respect to Impact and Responsiveness. Scotiabank rose significantly in the rankings over the last six months, from tenth place to second. With an increase in eValue score by approximately 110 percent, Scotiabank significantly boosted its rankings by focusing on its response strategy, which enabled the brand to come in second place with an impressive Responsiveness score of 80.38. They also scored the highest in Engagement with 74.44. CIBC moved three spots from seventh to fourth place, increasing both its Engagement and Responsiveness scores.

“Retail banks are realizing that personalizing the online experience helps to improve the brand’s overall reputation. Increased trust in your brand ultimately results in higher fan engagement, as customers continue to come back to interact with your online content because they know they can expect a response from the brand,” stated Segal.