According to the eValue data, the top ten retail banks in Canada are: 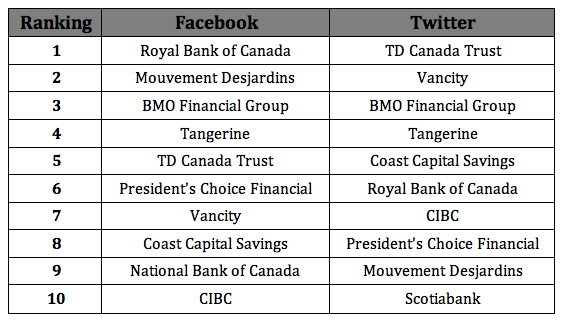 “Canadian banks are shifting away from the heavily finance-focused conversation on social media and highlighting moments in their customers’ lives where their offerings may be applicable. As social media has become a tool for brands to communicate with their customers, these banks are using the platforms to support their customers in attaining goals and milestones such as purchasing their first home, saving for their children’s education, or planning for retirement,” said Bryan Segal, CEO of Engagement Labs.

Segal continued, “By measuring the banks’ eValue scores, we see that top “Big 6” banks Royal Bank of Canada and TD Canada Trust are leading the pack while Mouvement Desjardins and Vancity follow closely behind on both social media platforms.”

The eValue tool allows for a more in depth social media analysis by measuring brands’ performance based on multiple metrics. One of the measurements examined was Engagement which is defined by how well the brand’s audience on social media engages with its content. The following chart ranks the Canadian retail banks in terms of the Engagement metric. 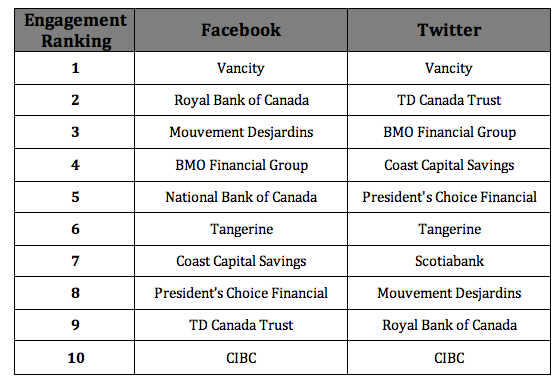 Vancity, a member-owned financial co-operative and the largest credit union in Canada, has outperformed the “Big 6” banks according to the Engagement score. This indicates that Vancity has content that resonates with their followers who are also members. Interestingly enough, many of the Vancity’s most engaging posts are not heavily finance-oriented. Many posts focus on promoting their contributions to local initiatives and their “Shared Success” program which donates 30% of their net profits to local charities such as affordable housing initiatives and environmental organizations.

RBC’s top posts on Facebook were in regards to their sponsorship of “We Day.” TD Canada Trust’s top post on Facebook was about their Aeroplan Miles program. Scotiabank has been using its Facebook page as a promotional tool to inform its audience about its Instagram contest by asking users to redirect to that page and to get involved. Their strategy during this period was likely to increase Engagement in other channels beyond Facebook.

Engagement Labs (TSX V.EL) offers intelligent social data, analytics and insights for organizations that are actively engaging on social networks. Offered as a SaaS or through an API, the eValue™ analytics platform allows brands to measure and maximize the effectiveness of their social media marketing campaigns, as well as measure that of their competitors across major social networks Facebook, Twitter and YouTube. Engagement Labs maintains offices in Montreal, Toronto and Paris. www.engagementlabs.com / www.eValueanalytics.com