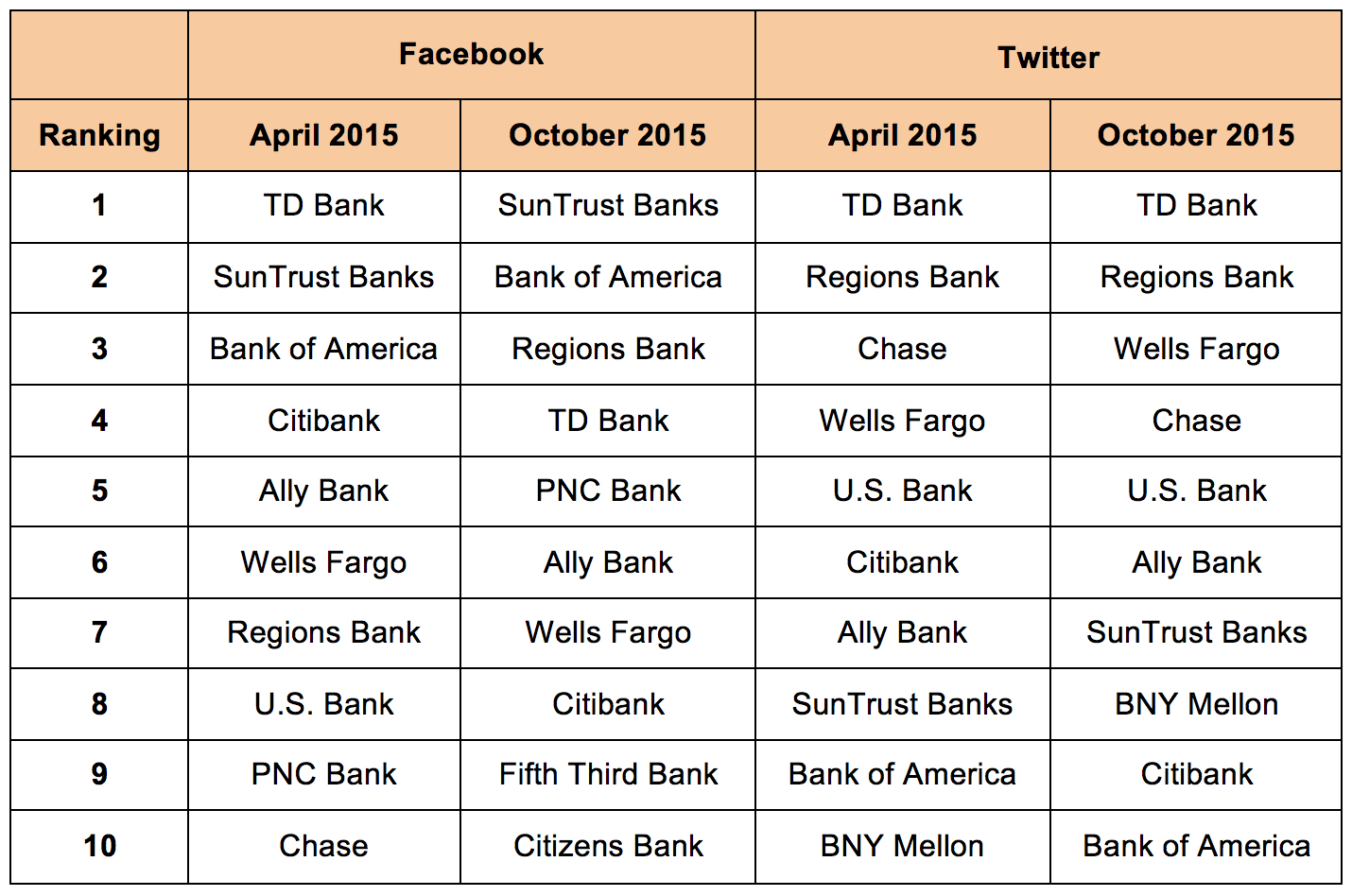 Looking at the six month comparison on Facebook, SunTrust Banks moved up in the ranking with the highest eValue score, overtaking TD Bank. The Company also improved its Responsiveness score by 34 percent and saw a boost in Engagement. Bank of America moved from the third to second spot and Regions Bank jumped from seventh to third, which is due to its significant improvement in Responsiveness score.

"Responding to customers is and should be a huge part of a business' social media strategy, especially in the financial sector where customers often turn to social media to ask questions about financial services," said Bryan Segal, CEO at Engagement Labs. "Finance is a very personal and emotional topic for many, and financial institutions who leverage their social channels to respond to consumer inquiries and humanize their brands will in turn build stronger relationships with their consumers."

Online, TD Bank was the frontrunner on both Facebook and Twitter based on the April and October 2015 rankings. In Engagement Labs' six month follow-up, TD Bank maintained its dominance on Twitter increasing Responsiveness by 33 percent. Regions Bank also maintained its second place ranking, while Wells Fargo increased one place overtaking Chase. Wells Fargo also had an impressive increase in Impact, significantly increasing the potential reach of its content.

Regions Bank also performed well in terms of offline word of mouth, and ranked number one for offline word of mouth sentiment, with 77 percent of the brand's overall sentiment being positive. TD Bank came in a close second with 75 percent of conversations about the brand being positive. Both Regions Bank and TD Bank are great examples of brands who are propelling conversations both on and offline.

PNC Bank came in the top spot for WOM momentum. Momentum demonstrates the increase of brand mentions based on a six month comparison from 2014 to 2015. On Facebook, PNC Bank came in fifth place in October 2015 rankings, a four place increase from Engagement Labs' earlier 2015 ranking, showing the brand is gaining momentum both on and offline. US Bank was ranked second highest for WOM momentum, however, online the brand's eValue score decreased both on Facebook and Twitter. This demonstrates that offline word of mouth does not always translate online and vice versa.

"Consumers move fluidly between online and offline when they talk about brands, and thus it's essential for brands to have an understanding of how their customers are engaging with them both online and offline. Just focusing on one aspect -- online or offline -- can create missed opportunities for a brand to create meaningful customer relationships," noted Segal.

Engagement Labs (TSXV:EL) offers intelligent 'Total Social' data, analytics and insights for marketers and organizations enabling them to track, measure and benchmark the conversations happening around their brand or industry both online and offline. These conversations are proven to drive critical business outcomes, including sales, while Engagement Labs' tools provide data and actionable insight to help guide business decisions and power marketing effectiveness.

Engagement Labs' eValue™ Analytics tool is the global benchmark for social media scoring. eValue's proprietary data technology offers real-time analysis to measure a brand's social media and digital marketing efforts, distilling it down to a single meaningful number between 0 and 100 -- an eValue score. Composed of a series of metrics and Key Performance Indicators (KPIs), an eValue score measures social media Engagement, Impact and Responsiveness which is benchmarked against 100,000+ handpicked and verified brands. The Keller Fay Group, an Engagement Labs company, is the only firm to regularly measure offline conversation via TalkTrack ®; independent research finds offline conversation is a significant driver of sales with twice the impact of online conversation.