TORONTO, Ontario – April 15, 2015 – Technology and data company, Engagement Labs, creator of the eValue™ score, today released the top ten retail bank institutions based on their social media performance on Facebook and Twitter over the last month.

According to the eValue data, the top ten retail banks in the U.S. are: 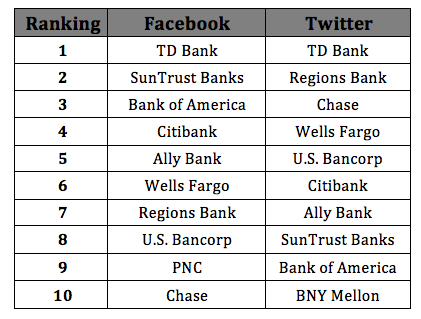 “The American retail-banking sector has undergone major changes in the 21st century and has had to adapt to changes in customer behavior and banking preferences,” said Bryan Segal, CEO of Engagement Labs. “Retail banking has moved from an in-store experience to online and mobile platform interactions with their prospects and customers. With this change, banks have had to devise new strategies to retain customers, upsell and ensure Customer Lifetime Value which involves creating a sophisticated social media strategy.”

Segal continues, “The American banking sector has had its fair share of difficulties including its slow recovery from the 2008 recession and fairly new regulations on lending. With the growth in social media marketing, this has given the American Financial Institution an opportunity to connect with customers in a unique manner. These connections have delivered a persona to financial institutions, and have driven a movement of customer service to social media channels.”

The nationwide banks dominate the overall eValue score category on both Facebook and Twitter. TD Bank tops the Facebook category and the Twitter category. TD Bank is making financial jargon more digestible for customers with their #FinancialEducation hashtag, and allows users to share their opinion on and experience with personal finance.

The eValue tool allows for a more in depth social media analysis by measuring brands’ performance based on multiple metrics. One of the measurements examined more closely was Engagement. Engagement is defined by how well the brands social media channel’s audience engages with the brand’s content. The following chart ranks the retail banks in terms of the Engagement metric in the U.S. 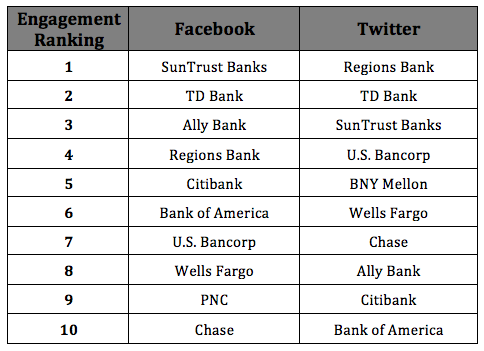 SunTrust Banks has the highest Engagement score on Facebook compared to all of the major retail banks in America. Their top posts are less focused on finance and heavily focused on interactions and moments that may require the help of the bank. For example, the Company used #MySunnyDay hashtag for users to describe what they’re saving for.

Regions Bank has the highest Engagement Score on Twitter. They conduct Twitter chats with their followers on a variety of subjects, from taxes to personal supporters. They are also engaging students on campus with their sponsorship initiatives.

Engagement Labs (TSX V.EL) offers intelligent social data, analytics and insights for organizations that are actively engaging on social networks. Offered as a SaaS or through an API, the eValue™ analytics platform allows brands to measure and maximize the effectiveness of their social media marketing campaigns, as well as measure that of their competitors across major social networks Facebook, Twitter and YouTube. Engagement Labs maintains offices in Montreal, Toronto and Paris. www.engagementlabs.com / www.eValueanalytics.com