NEW YORK, NY (May 10, 2018) – It hasn’t been all smooth rides for the airline sector over the last six months, with technical malfunctions, major hiccups in customer service and even tragedies involving passenger pets. However, according to an in-depth social analysis by Engagement Labs of consumer conversations that take place offline (face-to-face), as well as online (via social media), the best keep getting better while those at the bottom have shown little improvement over the last six months.

To help airline marketers better understand which brands consumers are talking about with family, friends and peers, both offline and online, Engagement Labs released its latest TotalSocial® rankings on the top performing airlines in the U.S. The report looks at how each airline performed in social conversations over the past six months, compared to a previous ranking of the top airlines in September 2017. The analysis, which is unique in that it combines offline and online consumer conversations, is based on Engagement Labs’ proprietary TotalSocial data and analytics continuously measures the most important drivers of brand performance in both face-to-face and social media conversations. 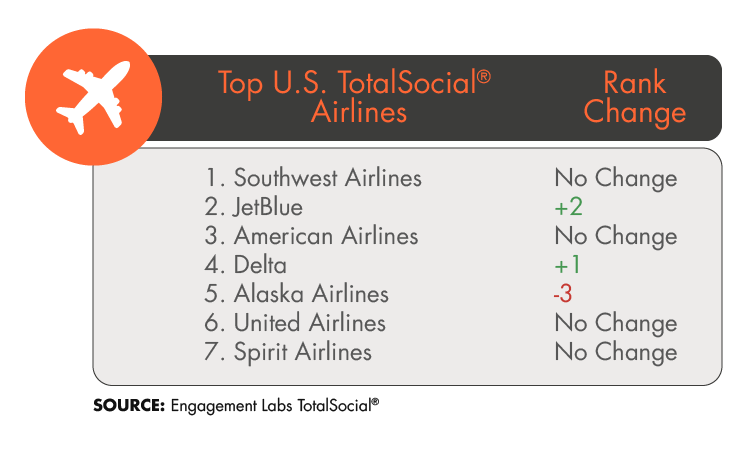 According to the report, Southwest Airlines maintained its leadership position and saw a sizable increase in its online and offline influence score. Engagement Labs defines influence as how well the brand connects with the everyday influencers who have the largest social networks in both the offline and online worlds.

“While our analysis timeframe did not include the recent Southwest tragedy that took place on April 17 killing one passenger, our initial data shows that offline and online sentiment for the brand fell sharply during the week of the incident,” said Ed Keller, CEO of Engagement Labs. “However, since our analysis only takes into context six months prior to March, we don’t yet know the long-term impact this may have on the brand’s position as the number one airline.”

Keller added, “Southwest has clearly built a brand that consumers enjoy interacting with and sharing positive experiences about. While we do expect to see negative conversations take place around a tragedy like the one that just passed, this doesn’t mean that Southwest will suffer long-term reputational damage if it continues to deliver an authentic experience, create a strong work environment and execute strong marketing campaigns.”

In second place, JetBlue moved up two spots to number two as a result of the airline’s increase in its offline sentiment—indicating that conversations about the airline were positive—and online influence score, which measures the amount of influencers talking about the brand. Its increase was a result from the airline being named the Best Place to Work for LGBTQ Equality by the Human Rights Campaign Foundation at the end of 2017, a title it has earned for the sixth year in a row. In addition, JetBlue was very active in supporting recovery efforts in Puerto Rico launching a public service campaign, 100x35JetBlue.

While the position of United Airlines in the ranking does not change, its sentiment score is lower than that of Spirit Airlines’ in last place, indicating that while many consumers may be talking about the brand, they are having negative conversations.

Alaska Airlines fell to fifth place, previously ranked second, as a result of its decline in offline sentiment. The airline’s decline may have been attributed to an incident in which the flight attendants failed to address a passenger’s lewd and uncomfortable remarks which resulted in negative conversations among the public.

Engagement Labs (TSXV:EL) provides the world’s leading brands with a unique and powerful data and technology solution to drive sales growth and improve marketing ROI. Our TotalSocial® technology combines online social media listening metrics with the world’s only ongoing measurement of offline word-of-mouth conversations into a single dashboard, to provide marketers with the ability to measure performance, diagnose areas of weakness and opportunity and identify specific strategies and tactics to increase sales and improve marketing ROI. TotalSocial is an “always-on” proprietary scoring system, based on the most important drivers of brand performance: Volume, Sentiment, Brand Sharing and Influence. TotalSocial tracks 500 brands across 16 major industry categories within the U.S., and 350 brands across 18 industry categories in the UK.