Scream Queens Continues to Rule Over the Online Conversation, while The Muppets Make an Offline Comeback

Scream Queens is undefeated with respect to online conversation on Facebook, Twitter and Instagram for the fourth week in a row, while placing a close second to The Muppets for the most offline word of mouth.

According to TalkTrack and eValue data, below are the rankings of the new fall TV shows for offline word of mouth conversation and on Facebook, Twitter and Instagram: 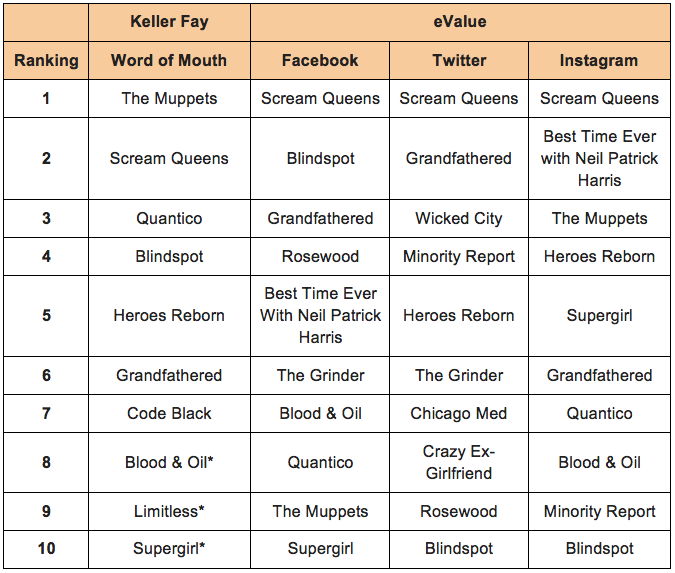 “Four weeks into the fall TV season and Scream Queens has not budged from its first place ranking online. This is likely a result of their social media strategy that leverages content from their big-name celebrity cast” said Ed Keller, CEO at Keller Fay and President at Engagement Labs. “While maintaining online hype, the show has also consistently battled with The Muppets for top spot for offline word of mouth conversation during the course of the first four weeks of the fall TV season. Despite being the most talked about shows offline, the conversations about Scream Queens and The Muppets have not always been positive.”

This week, The Muppets experienced a comeback, reclaiming the sole top spot for word of mouth conversations and rose in online rankings for both Facebook and Instagram. On Facebook, the show broke into the top ten and on Instagram, it jumped two spots to third place. However, the show also experienced lower than average positive conversations (sentiment) among both men and women; its sentiment is second lowest in sentiment scores, with only Scream Queens faring more poorly.

Several new shows were able to break into the top ten for both online and offline conversation, as they premiered or their premiere dates approached. Supergirl reentered the offline word of mouth conversation rankings at tenth. The show also moved into the rankings on Facebook, and experienced a 10 point eValue score increase to place fifth on Instagram. In addition, newcomer Wicked City experienced a significant 30 point increase in its eValue score, placing third on Twitter, while the recently premiered Crazy Ex-Girlfriend placed eighth, after jumping more than 30 points.

“It is to be expected that shows that just premiered or are about to premiere are driving buzz. However, the real test is measuring how they rank after they have been broadcasting for several weeks,” continued Keller. “The shows that have continuously made our rankings, week-after-week, are carving out loyal fan bases that are consistently discussing their programing both online and offline. However, it is a challenge for those shows that have low sentiment scores to learn how to activate their fans to offset negative word of mouth.”

For more information on the rankings or to receive the full data set please contact – Jessica.Dellaquila@engagementlabs.com