Patagonia, Lululemon and Weight Watchers Work Up an Online Social Sweat, While Under Armour and New Balance Work Out Word of Mouth Conversations

TORONTO, ON – January 7, 2016 – Technology and data company Engagement Labs (TSXV:EL), creator of the eValue™ score, today released its Total Social™ data rankings on the top fitness apparel brands both on social media and through word of mouth (WOM) conversations in the U.S., as well as rank the top diet and weight loss programs on Facebook, Twitter and Instagram. 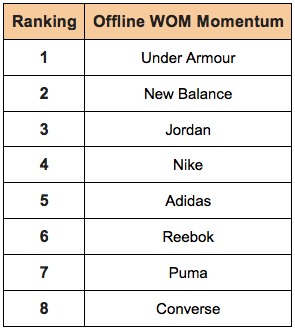 Source: Keller Fay’s TalkTrack® 2016 rankings of U.S. fitness apparel brands’ based on the largest increase in WOM volume in 2015 versus prior year. 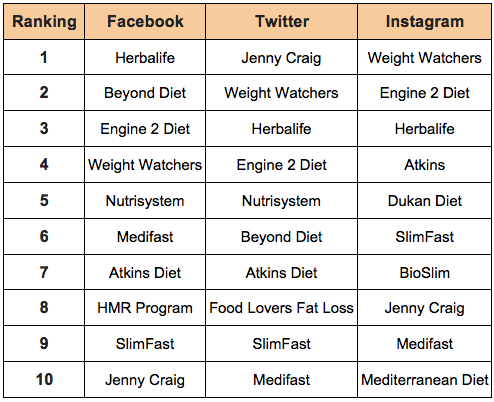 “A new year marks the time for New Year’s resolutions, with a very popular one being to get into shape. January becomes an extremely busy month for fitness-related businesses as consumers turn to these brands to achieve their goals,” stated Bryan Segal, CEO at Engagement Labs. “Brands within the fitness apparel and diet and weight loss industries have a wealth of opportunity during the months leading up to Q1 to use social media to hone in on consumers looking to get fit in the new year and translate those resolutions into sales.”

The high-end outdoor active gear brand Patagonia ranked first on Facebook with the highest eValue and Engagement score. With the most active user base, the brand generated the highest number of likes and shares per 1,000 fans by leveraging user-generated content, such as images of natural landscapes or adventure stories from users. ASICS placed second for eValue score, with the highest active userbase. While Lululemon Athletica placed third, boasting the highest Responsiveness score, demonstrating the brand’s dedication to building its online Lululemon community. The brand also boasted the largest fan growth with an increase of 39,492 fans during the time period measured.

On Twitter, Lululemon outranks its fellow fitness apparel brands with an impressive eValue score. The brand also scored the highest for Engagement and Responsiveness. Lululemon’s most engaged posts were motivational tweets aligning with its brand’s reputation of encouraging better and healthier living. New Balance placed second for overall eValue score, boasting the highest active user base. Nike followed behind with the largest follower base and follower growth. The brands most engaged post leveraged its #GetOutThere campaign which encourages people to get outside during the winter months and be active.

On Instagram, Patagonia again took the top ranking for fitness apparel with the highest Engagement score and the most likes and comments per 1,000 fans. The brand took a similar approach to its Facebook page, sharing user-generated content and providing photo credit for each post. Lululemon Athletica, although ranking ninth for overall eValue score, had the highest Responsiveness score and the highest number of admin comments, again showing strategic dedication to its online community.

“With fitness apparel brands reaching more audiences online, we’re seeing these brands translate its online success offline,” continued Segal. “Successful online brands like Under Armour, New Balance and Jordan - which ranked first for Impact across all three online social channels - are seeing increased offline Word of Mouth conversation as indicated by the TalkTrack rankings. Whereas, larger brands like Nike and Adidas, that performed less positively online, are seeing this hinder the amount of offline conversation surrounding its brands.”

Diet and weight loss programs approached their online channels similarly to fitness apparel brands with a focus on telling real stories and talking directly to users. On Facebook, Herbalife ranked first with the largest number of fans, while Beyond Diet placed second with the highest Impact score and largest fan growth. However, it was Engine 2 Diet, which ranked third, that scored the highest for Engagement with posts asking direct questions to users regarding their fitness goals and sharing success stories. The brand also had one of the highest Responsiveness scores demonstrating its dedication to communicating and further engaging its audience.

On Twitter, Jenny Craig ranked first for diet and weight loss programs with the highest overall eValue score, Engagement and Responsiveness scores. Posting content with its returning celebrity spokesperson Kirstie Alley, as well as posting articles that discuss the weight loss process, the brand’s content resonated with fans. Weight Watchers placed second with the largest following and follower growth during the time period measured, which could have been attributed to the announcement that Oprah is their new spokesperson. However, the brand posted significantly less than its competitors. With one of the highest active user bases, Weight Watchers could boost engagement with its channel by posting content more frequently.