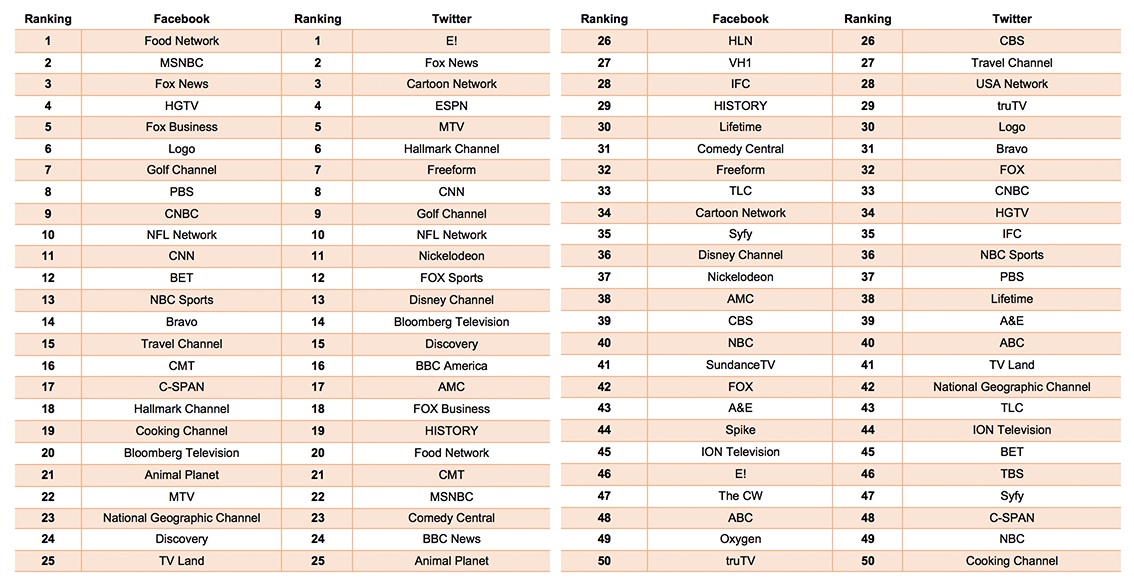 “The TV landscape has drastically changed due to the rise in popularity of TV streaming services,” stated Bryan Segal, CEO at Engagement Labs. “Otherwise known as over-the-top (OTT) content providers, these services have proven to be fierce competition for traditional TV networks. With the dynamics of television viewing shifting drastically, the online conversations among TV fans have begun to reflect these changes.”

On Facebook, TV networks generally scored extremely well for both Engagement and Impact, with Food Network leading the rankings with the highest overall eValue score. Fox Business had the highest Engagement of the group, using a content strategy which prompted its fans to share their thoughts on various political news stories and video interviews. The network garnered the most likes, comments and shares per 1,000 fans. MTV scored the highest Impact of the group, indicating that its content was reaching the most fans.

While networks earned impressive scores for Engagement and Impact on Facebook, OTT content providers demonstrated excellent Responsiveness on the channel. All three streaming services - Hulu, Netflix and Amazon - individually earned a higher Responsiveness score than the average Responsiveness score generated by all the TV networks measured, showcasing a commitment to engaging in two-way conversation with subscribers. Hulu placed first for OTT content providers with the highest Engagement. Despite posting much less frequently than its fellow streaming services, fans clearly enjoyed the content the brand shared, including when it announced new shows and posted clips from popular shows.

“With more TV viewers switching to OTT services for their television viewing needs, it’s not surprising to see these services boast similar reach as networks - as indicated by the high Impact scores,” continued Segal. “These new services are giving TV networks a run for their money by focusing on two-way communication through effective response strategies. These strategies build brand affinity and trust amongst followers, something networks are lacking on Facebook, as highlighted by their low Responsiveness scores.”

OTT content providers continued to score well for Impact on Twitter, highlighting that their content is reaching just as diverse audiences as TV networks, with Netflix boasting the highest Impact of the OTT services. Engagement was higher on Twitter for streaming services, with Amazon scoring the highest in the category and Hulu gaining the most retweets and likes per 1,000 fans. Amazon ranked as the most responsive, helping to secure its first place ranking.

“Due to the real-time nature of the platform, Twitter lends itself to quicker and more direct fan conversations, which TV networks are leveraging. With networks focusing primarily on content on Facebook and isolating their response strategies to Twitter, they are missing ample opportunity to engage fans across both channels,” noted Segal. “OTT content providers have identified that both Facebook and Twitter audiences are key assets to their overall online presence and, ultimately, subscription numbers. By taking a page from streaming services and placing emphasis on both content and communication across all online channels, traditional TV networks can continue to engage their widespread audience and translate online engagement into higher TV ratings.”