Like last week, the Company found that Scream Queens continued to dominate the social media space, based on eValue social media rankings. However, when looking at the offline data, the show stepped down one spot to third place. Additionally, The Muppets continued to take the lead two weeks in a row with Keller Fay’s TalkTrack monitoring of offline word of mouth conversations.

According to TalkTrack and eValue data, below are the rankings for new fall TV shows for offline word of mouth conversation and on Facebook, Twitter and Instagram. 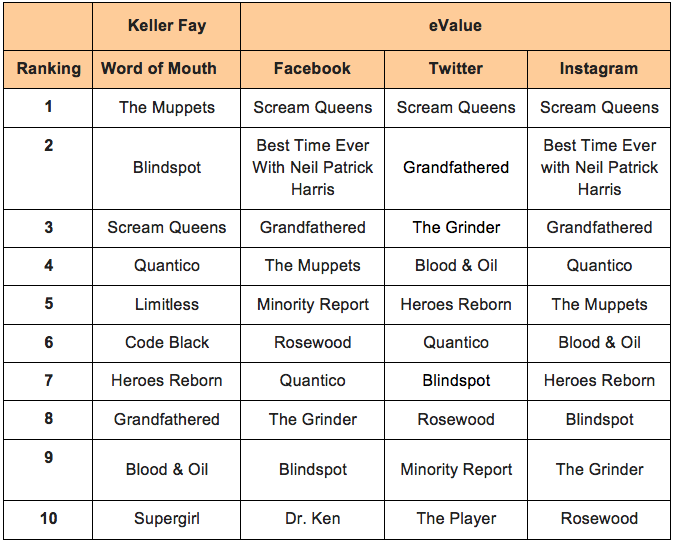 “As the fall TV season progresses and new TV shows find their footing, audiences are getting a better idea of what shows they will continue to watch each week,” states Ed Keller, CEO at Keller Fay and President at Engagement Labs. “And as more TV shows premiere, audiences have more to talk about. For example, we saw shows like Grandfathered and Code Black moving their way up in the rankings since last week.”

When looking at the data, the Company found that the drop in Scream Queens’ score from second to third in the rankings for offline word of mouth conversations can be attributed to the fact that their word of mouth ranking amongst men declined from third to ninth place. However, they still secured second place for the most-talked about show amongst women. Based on eValue data, the show continues to lead online conversations across the board. It also remains the most polarizing and has the most negative/mixed sentiment offline out of the top ten shows – which stays unchanged from last week.

While Scream Queens slipped offline, Blindspot jumped to second place, nearly pulling even with first place finisher, The Muppets, for word of mouth conversations among men. The Company also found that Blindspot and Limitless both came in second for positive word of mouth sentiment among the top ten shows. According to the eValue data, Blindspot’s ranking dropped across all three social channels for online conversations.

Other significant changes to the top ten most-talked about shows offline occurred with three new entrants to the list – Code Black, Grandfathered, and Supergirl. Code Black moved from eleventh to sixth place and Grandfathered moved from fourteenth to eighth after their premieres this week. Grandfathered managed to rank high for online conversations placing third on Facebook and Instagram and second on Twitter.

Quantico made an impressive six spot leap to fourth place for offline word of mouth conversations, while also securing first place for positive sentiment offline. This shift in offline conversations showcases that the show is resonating with audiences as it continues. Quantico placed fourth on Instagram with an approximate 25 percent increase in their eValue score. However, the show dropped in rankings on both Facebook and Twitter, with an approximate 16 percent decrease in their eValue score on Twitter.

“As indicated by the significant changes in the top ten list for most-talked about shows offline, audience support is fluid early this TV season. With new shows premiering this week, we see audiences already moving on in discussion from the shows that premiered last week,” notes Keller. “This volatility of audience attention reflects how important it is for the new TV shows to engage with their fans through both online and offline efforts. It is not enough to depend on one medium to propel you forward. As we can see, shows that are doing well offline can see their online performance suffer if they don’t make the most of their interested and active fan base.”

Engagement Labs will continue to measure the new fall TV programming leveraging ‘Total Social’ data on a weekly basis. For more information on the rankings or to receive the full data set please contact – Jessica.Dellaquila@engagementlabs.com