TORONTO, ON – March 3, 2016 – Technology and data company Engagement Labs, released its rankings on the top U.S. Automotive brands both on social media and through word of mouth (WOM) conversations. 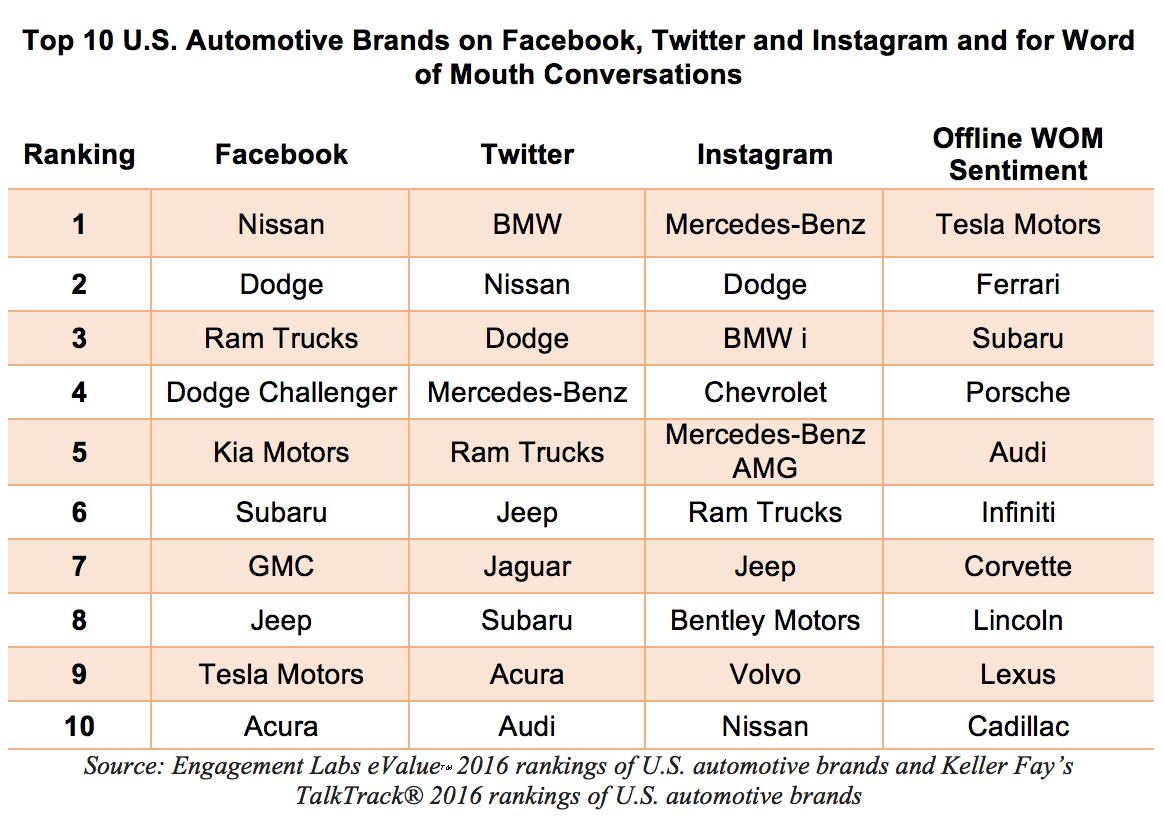 “In a competitive field such as the automotive industry, brands have a tough time standing out. While social media provides an excellent avenue to differentiate one’s brand from the competition, it’s just as important for brands to understand the power of its offline conversation impact,” stated Bryan Segal, CEO at Engagement Labs. “According to Engagement Labs’ data, while many economic automotive brands perform well on social media, they are not creating offline conversations at the scale some luxury automotive brands are.”

On Facebook, Nissan, Dodge and Ram Trucks had the highest overall eValue score. In many cases, what catapulted these brands to the top was a strategy which leveraged user-generated content. Both Nissan and Dodge leveraged this approach – which included posting pictures of owners in their cars – which also resulted in high fan engagement. In general, brands that leverage user-generated content tend to see increased Engagement on their social posts.

On Twitter, BMW ranked first with the highest eValue score. Nissan continued to perform well and ranked second with higher Engagement and Impact scores than BMW; however, the German automaker outperformed Nissan with the highest Responsiveness score. This demonstrates the power of engaging in two-way conversations with followers. The highest Engagement score was secured by third-place finisher Dodge, which leveraged a similar strategy to its Facebook channel. Sharing user-generated content of Dodge vehicles accompanied by the hashtag #ThatsMyDodge and the username of the customer who submitted the image, the brand climbed its way to the top of the Engagement metric. Mercedes-Benz had the highest Impact score which indicates the luxury automotive brand has massive reach and appeal with consumers.

Mercedes-Benz ranked first on Instagram with the highest eValue and Impact score as well as the largest follower growth of the top ten brands of 82,755 new fans during a four week time period. Ram Trucks had the highest Engagement score due to posting images of its vehicles submitted by users. The brand leveraged its user-generated content with the hashtag #RamLife and generated the most likes per 1,000 fans. Crediting the user who submitted the image, the Ram Truck Instagram account posted every Tuesday and Saturday with either the hashtag #TruckCrushTuesday or #SupedUpSaturday generating up to 4,400 likes on the most engaged post.

While the family-friendly, economy brands reigned on social media, when it comes to offline conversations, Engagement Labs found luxury automotive brands generated the most positive word of mouth conversations. The brand with the most positive offline word of mouth conversation is Tesla Motors. The brand’s commitment to environmental-friendly alternatives, which was a hot topic of discussion, had contributed to an extremely positive offline reputation. Other luxury brands such as Ferrari, Porsche and Corvette ranked high among the top ten as well.

“Known for their stellar aesthetics and high-end performance, it is no surprise to see luxury automotive brands place higher amongst offline conversations in regards to sentiment,” noted Segal. “However, luxury appeal is not the only factor in positive word of mouth conversations. For example, Subaru, which recently received high Consumer Reports ratings, also performed well offline. There is an opportunity for Subaru to take this positive momentum to social media to amplify discussion around the brand, both online and offline.”

Engagement Labs offers intelligent data, analytics and insights for marketers and organizations enabling them to track, measure and benchmark the conversations happening around their brand or industry both online and offline. These conversations are proven to drive critical business outcomes, including sales, while Engagement Labs’ tools provide data and actionable insight to help guide business decisions and power marketing effectiveness.