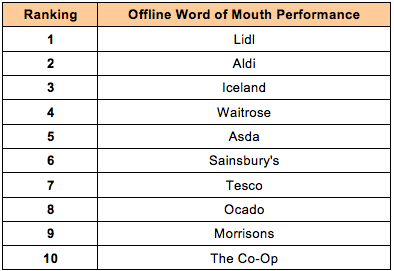 Source: TalkTrack® Britain 2015 Performance ranking based on share of supermarket conversations and sentiment.

Based on the TalkTrack data, Lidl, Aldi and Iceland emerge as WOM leaders, based on their share of positive conversations relative to their market size.

“In all three cases, strong performance is driven by relatively high volumes of WOM (taking into account the size of each store’s customer base) and above-average sentiment from consumers when discussing these brands. It’s no coincidence that these brands are outperforming the market,” noted Steve Thomson, UK Managing Director of Keller Fay.

Asda ranks top of the Big 4 supermarket brands, but Sainsbury’s is not far behind. On the other hand, Ocado, ranked eighth, was relatively low due to low volumes of WOM which is a challenge for pure online brands. However, the brand is also weak on social media channels, Facebook, YouTube and Instagram, which can also impact offline WOM performance.

“Social media provides a unique opportunity for brands to leverage online content to amplify the offline conversations around their brand, therefore it’s imperative for these brands to create online content that can activate conversations offline, said Bryan Segal, CEO at Engagement Labs. “Typically, those talking online are also talking offline. These types of fans and followers have the ability to become multi-channel brand influencers.”

When looking at the data, Engagement Labs found most of the supermarket brands have a high volume of fans and followers on both Facebook and Twitter, and their eValue scores reflect this strength. Therefore, there is an opportunity on Instagram and YouTube to drive further engagement and impact with consumers through visual images and video, where scores are lower overall but a few brands really stand out.

Within individual platforms, Sainsbury’s ranks top among UK supermarkets on Twitter, but the Company found that most UK supermarket brands are performing relatively well on this channel. Across Facebook, there is more variation but the more striking fact is the significant differences in brand rankings across the two social media platforms. 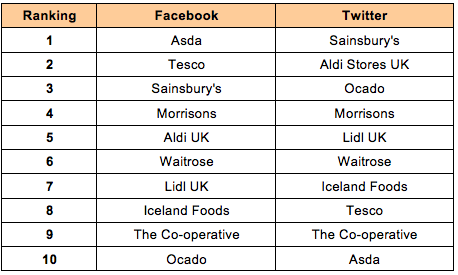 On Instagram and YouTube, Engagement Labs found that their eValue scores are generally much lower, but some stronger performers are evident. For example on Instagram, The Co-op (eValue score 66) has strong engagement amongst its modest follower base, whereas Waitrose is top performer on YouTube with an eValue score of 58, reflecting much higher levels of interaction in the channel beyond just views.“When looking as Asda, the Company is strong on Facebook and demonstrates the ability to leverage social media to engage and communicate with followers, creating a truly social community. On Facebook, the brand has the highest Engagement and Impact subscores and also has the highest number of likes and shares per 1000 fans. By using a mix of online content, such as recipes, new product launches and highlighting customer experiences through user-generated content, they have successfully increased brand affinity. However on Twitter, Asda’s eValue score is dragged down by very slow responsiveness, with admin reaction to tweets considerably slower than channel leader Sainsbury’s,” continued Segal.

With the announcement of the acquisition of leading conversation market research firm Keller Fay, Engagement Labs has combined the power of their proprietary eValue social media measurement score with Keller Fay’s offline conversation measurement data. Companies are now able to gain insights on their brand though ‘Total Social’ Media Measurement of both online and offline conversations. Leveraging Talk Track and eValue data demonstrates the importance and power of understanding consumer conversations through different channels, and benchmarking performance against peers. Optimising different channels can amplify a brand’s messages to drive purchasing behaviours and strengthen bonds between consumers and brands.

Engagement Labs (TSXV:EL) offers intelligent social data, analytics and insights for organizations that are actively engaging on social networks. The eValue™ Score is the global benchmark for social media scoring. The eValue Analytics platform allows brands to measure and maximize the effectiveness of their social media marketing campaigns, as well as measure that of their competitors across major social networks Facebook, Twitter, YouTube and Instagram. The Keller Fay Group is a market research company specializing in helping brands to maximize their marketing effectiveness through WOM advocacy. It is the only firm that regularly monitors offline conversations, which independent research finds are a significant driver of sales with twice the impact of online conversation. Engagement Labs maintains offices in Toronto, London and New Brunswick, New Jersey. www.engagementlabs.com / www.kellerfay.com