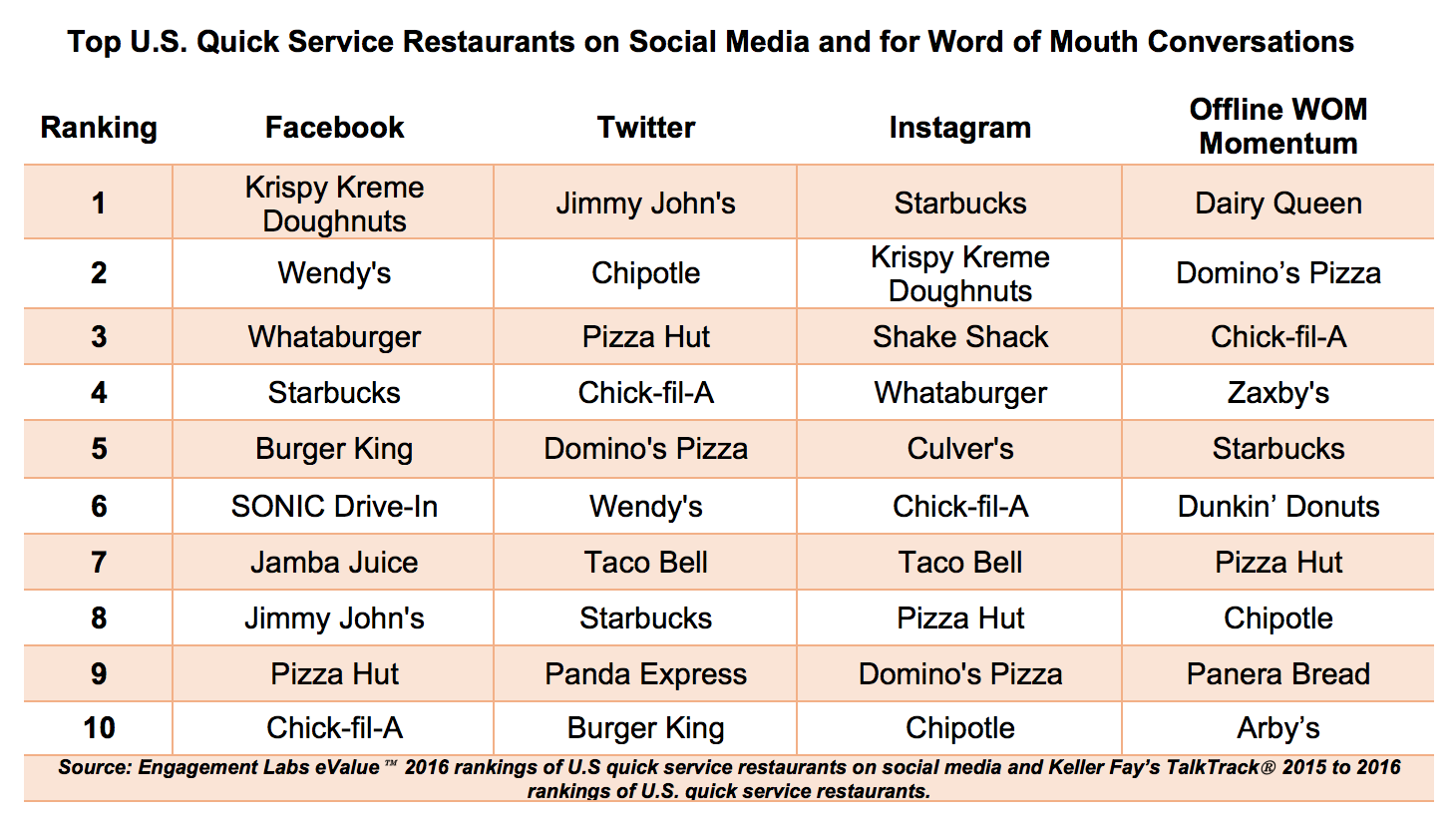 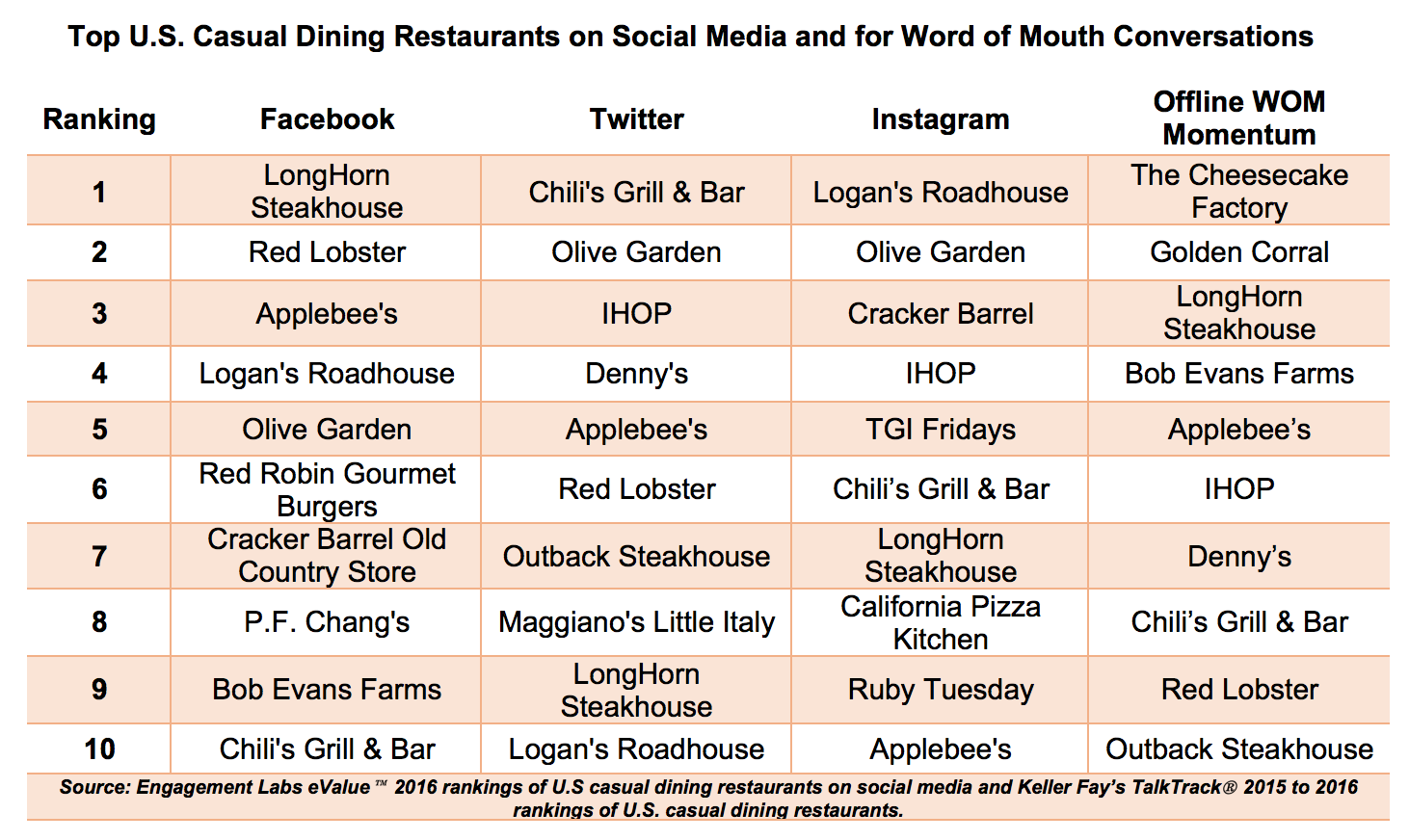 “Known for their convenience and affordability, quick service and casual dining restaurants are an extremely appealing food option for the public. With social media used as a platform to introduce new menu items and promotions, consumers are constantly turning to these channels to be kept up-to-date at all times,” stated Bryan Segal, CEO at Engagement Labs. “While restaurants are reaching audiences easily on social media, retention is the key focus for both quick service and casual dining restaurants as they aim to stay ahead of the competition by having consumers come back to their channels consistently and remain top of mind.”

On Facebook, Krispy Kreme Doughnuts secured a first place ranking for quick service restaurants with the highest overall eValue score, through posting a combination of its latest promotions and various holiday-centric campaigns. Whataburger, which ranked third for eValue, had the highest Engagement score of the top ten and the most likes and comments per 1,000 fans. This indicated that the brand’s content centered on images of its popular menu items and merchandise with simple and witty captions resonated well with its followers. Jimmy John’s scored the highest Responsiveness and response rate.

On Twitter, Jimmy John’s ranked first for quick service restaurants with the highest eValue score and most likes and retweets per 1,000 fans. Chipotle, which ranked second with the highest Responsiveness, utilized the platform to react to the recent E. coli scare that made waves in the news. For example, the brand live-tweeted food and safety training underwent by all their employees and responded frequently to consumer concerns to get ahead of the scandal. Panda Express ranked first for Engagement by focusing its content on their popular #OrangeChickenLove campaign to engage their user base.

On Instagram, Starbucks ranked first with the highest eValue and Impact scores of all quick service restaurants, while Krispy Kreme Doughnuts placed second. Shake Shack placed third with the highest Engagement score and the most active user base. Enlisting in user-generated content, Shake Shack posted images of its menu items, with the photographer tagged, to generate the highest number of likes and comments per 1,000 fans.

“Our research showed while quick service restaurants were scoring extremely high for Impact, their social media success was hindered when their content wasn’t engaging their audiences enough or the brand lacked a significant response,” continued Segal. “A response strategy is critical for the restaurant industry, as we saw in the case of Chipotle. Addressing both positive and negative matters is beneficial for a brand as it demonstrates to consumers a sense of accountability and honesty, which results in building trust.”

Among casual dining restaurants on Facebook, LongHorn Steakhouse ranked first with the highest eValue and Engagement score due to a social media strategy that consisted of posting professionally photographed images of menu items. Applebee’s scored the highest Impact, while P.F. Chang’s generated the highest Responsiveness score of the group.

In an analysis of the TalkTrack data for both the quick service and casual dining restaurants, overlap is seen between the successful online brands and those brands growing their offline WOM, according to their WOM momentum rankings. Nonetheless, significant differences are identified, as Dairy Queen showcased the most offline growth of conversation for quick service restaurants, while The Cheesecake Factory and Golden Corral demonstrated the most growth for casual dining restaurants. All three of the top-ranking brands for offline WOM momentum did not rank within the top ten eValue rankings.

“Brands within the competitive restaurant industry cannot rely solely on online conversations to retain customer business. It is imperative to understand that offline word of mouth can be just as impactful as online conversations, especially in the restaurant industry where recommendations drive so many purchasing decisions,” Segal noted. “Customers are faced with numerous options, so it is critical to create a brand experience, develop insightful response strategies and build online campaigns that create positive buzz around a brand both online and offline, to ultimately drive sales and build loyal consumer relationships.”