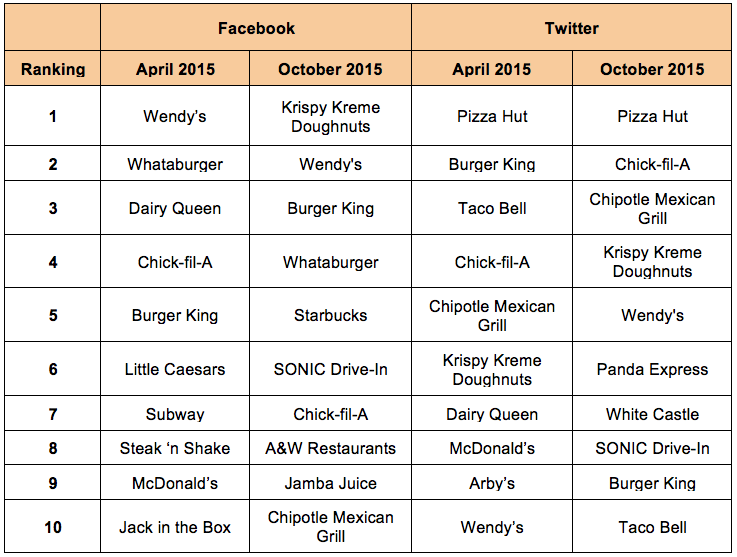 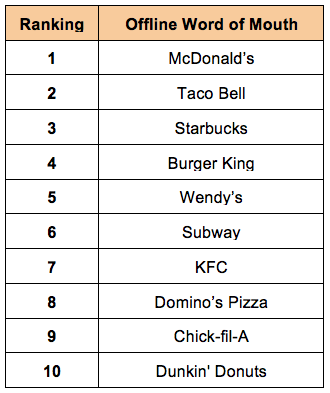 “Quick service restaurants are extremely appealing to the public since they are affordable and easily accessible. With such an immense reach and a reputation for fast-paced service, it is imperative for these brands to utilize social media channels such as Facebook and Twitter to keep up with consumer demand and inquiries,” said Bryan Segal, CEO at Engagement Labs. “With the restaurants facing increased competition, they must differentiate themselves to stay top-of-mind with their customers -- social media can serve as a platform to accomplish these goals.”

Based on Engagement Labs’ eValue data, Krispy Kreme Doughnuts took the lead on Facebook, generating an overall eValue score of 80.37, which was a significant jump compared to the April 2015 rankings, where the brand placed 14th. Boasting the most administrator posts (posts published by the account admin) out of the top Ten restaurants, Krispy Kreme Doughnuts drastically increased its Engagement subscore by posting content with images of its latest products and promotions connecting the brand to events such as Pirate Day and Halloween.

Previously top-ranked brand on Facebook, Wendy’s experienced a drop to second place after the six-month analysis, with a 13-point decrease in its eValue score to 78.94. The decrease in its overall eValue score is due to the brand’s Responsiveness subscore dropping significantly.

“Implementing a social media response strategy is a crucial factor in the restaurant industry as it creates a stronger connection between brands and their followers,” continued Segal. “Twitter is a prime social channel to allow real-time, two-way conversations between a brand and followers. For QSR restaurants, it is important to leverage this channel to answer consumer questions and respond to both negative and positive comments. Simply acknowledging a negative tweet can put a consumer at ease and build on brand affinity.”

On Twitter, Pizza Hut remained in first place and received the highest Impact subscore of 91.77 and 66.11 for Responsiveness. Chipotle Mexican Grill jumped three spots from sixth place to third with the highest Responsiveness subscore of 80.04. Chipotle Mexican Grill responds to followers by having admins sign off using their names. This humanizes the responses and makes the tweets more personal, building brand affinity among consumers. Meanwhile, Burger King, which previously held the second place slot, drastically dropped to ninth place with a decrease in both Engagement and Responsiveness.

As reflected by the TalkTrack data, while the top Ten brands for offline word of mouth conversations comprise many brands included in the eValue rankings, there are significant differences in the rankings overall. McDonald’s proved to be the most talked-about QSR brand offline, while Taco Bell placed second for word of mouth conversation. Neither first place brands in the eValue rankings, Krispy Kreme Doughnuts and Pizza Hut, made it to the TalkTrack top Ten.

“In such a competitive market, brands should understand that online conversations are not the only way to determine customer loyalty and offline conversations, and what people are saying via word-of-mouth is proven to be just as influential,” Segal noted. “The restaurant industry is very fast-paced, and it’s not enough for these brands to stay relevant on one medium alone. With customers having so many options, each experience and interaction counts. The power of conversations online and offline can sway share of wallet in a short period of time. Focusing on response strategies and generating positive buzz will help with bringing customers in the door and putting money in the cash register.”

Engagement Labs (TSX VENTURE: EL) offers intelligent ‘Total Social’ data, analytics and insights for marketers and organizations enabling them to track, measure and benchmark the conversations happening around their brand or industry both online and offline. These conversations are proven to drive critical business outcomes, including sales, while Engagement Labs’ tools provide data and actionable insight to help guide business decisions and power marketing effectiveness.