NEW YORK, NY (September 12, 2017) – The airline industry relies heavily on customer recommendations and reviews. However, due to a series of very public mishaps and renewed demands from the general public for better customer experiences, airline brands have been put under the microscope. For airline marketers, it has never been more imperative to understand the health of their brands, including what consumers are saying in both online and offline conversations.

To help airline marketers better understand where they stand and areas of improvement, Engagement Labs has released its trended TotalSocial® rankings on the top performing airlines in the U.S. with respect to consumer conversations, for the last six months. The report is a follow up to the Company’s first analysis of the top-ranking airlines in March 2017. The analysis, which combines offline (face-to-face) and online (social media) consumer conversations, is based on Engagement Labs’ proprietary TotalSocial data that continuously measures the most important drivers of brand performance in terms of social media and word of mouth conversations.

According to Engagement Labs’ data, Southwest Airlines, which was previously ranked fourth, has ousted JetBlue as the number one airline brand on TotalSocial and pushed JetBlue down to fourth place. Southwest Airlines increased its TotalSocial performance due to its strength in offline and online sentiment, indicating consumers are talking positively about the company. For example, responding to the some of the scandals that have dampened the industry in 2017, such as United Airlines’ bad press and outrage from customers after the airline pulled a passenger off a flight, Southwest Airlines announced they will no longer overbook its flights. 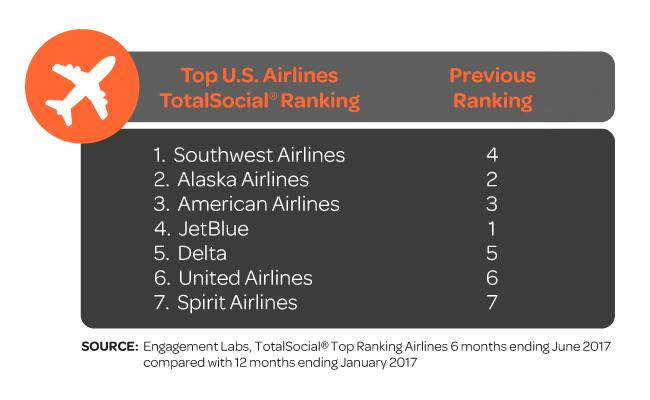 “Lately, it seems as if every major airline has been in the news regarding major flight delays, issues with customer service or inappropriate airline employees. However, while there has been negative conversation about the industry as a whole, Southwest Airlines has ‘flipped the script’ and sticks out from its peers in a positive way with a growing TotalSocial score,” said Ed Keller, CEO of Engagement Labs. “The company does exceptionally well due to its ability to focus efforts on its two most important audiences – customers and employees. One notable example was when a Southwest Airlines passenger with cancer had their luggage misplaced – including the medication they needed for chemotherapy – and one of the airline’s employees drove to the passenger’s house to personally deliver the suitcase in the middle of the night. It’s clear that Southwest’s customer service goes above and beyond.”

Within the past few months, JetBlue has seen its fair share of negative attention—especially after an incident in May that booted a family off of one of its flights. According to Engagement Labs’ report, incidents such as these have contributed to an increase in negative conversations about the brand, which contributed to its decline in online and offline sentiment. As a result, the brand saw a decrease in its overall performance, bumping it down to fourth in the ranking.

Keller continued, “It is extremely important for airline companies to understand the power of consumer conversations. Before consumers make a decision on which airline to fly, many think about past experiences, whether they were positive or negative, and look for recommendations, either by researching reviews online or talking to their peers. With a holistic view of what consumers are saying both offline and online, airline marketers have the opportunity to build relationships with their consumers and improve the brand’s performance and reputation.”

Meanwhile, the airlines which remained pinned to the bottom of the list, United and Spirit Airlines, continued to face customer outrage. Both have seen rising offline and online volume of conversations – indicating consumers are talking more about these airlines – but are declining in sentiment. For example, United Airlines’ offline sentiment scores decreased by 29 percent and its online sentiment decreased by 21 percent. Sometimes crises have a short-term impact and things return to normal relatively quickly—however, for United Airlines, that is not the case, demonstrating a need for the airline to invest in a strategy that will generate more meaningful and positive consumer conversations.

To learn more about Engagement Labs or its TotalSocial insights, and how to increase your brand’s word of mouth in real life and online, reach out at: totalsocial@engagementlabs.com.

About Engagement Labs
Engagement Labs (TSXV:EL) is the world's first TotalSocial® company, offering intelligent data, analytics and insights for marketers. We are leaders in tracking, measuring and benchmarking the impact of conversations happening around a brand and industry – both online and offline. Consumer conversations are a proven driver of critical business outcomes, including sales. The patent pending TotalSocial data solution provides brands with unique insights and powerful analytics to understand online and offline social impact and drive business results. TotalSocial demonstrates to marketers how their online and offline conversation compare and contrast and helps identify areas of competitive opportunity or significant emerging threats. TotalSocial is an “always-on” proprietary scoring system, based on the most important drivers of brand performance: Volume, Sentiment, Brand Sharing and Influence. TotalSocial was built on the pillars of Engagement Labs’ patented social media measurement tool and the world’s only offline word of mouth tracking system for brands and tracks 500 brands within the U.S. across 17 major industry categories, and 350 brands in the UK.