The opportunity for brand amplification both online and offline has never been bigger than during the Big Game. Conversations online and offline are augmenting each other to drive a bonanza of dialogue - superseding all demographics and standard advertising metrics. It is no surprise to see advertisers and sponsors spending millions of dollars to attach themselves to the event. 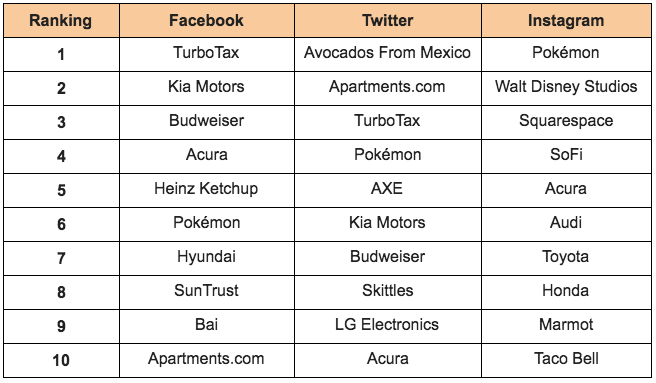 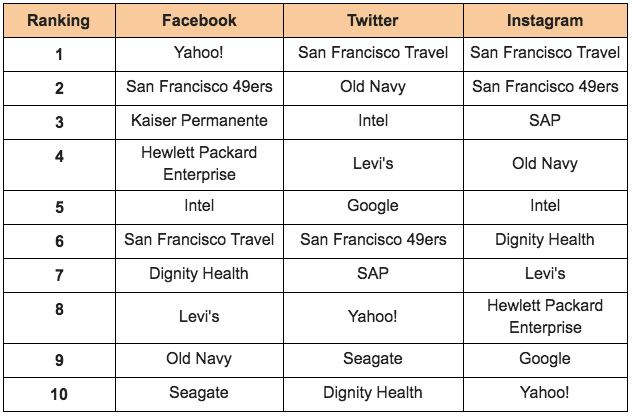 “This game is the television event of the year. Without fail, the game draws in millions of spectators creating conversations both online and offline,” said Bryan Segal, CEO of Engagement Labs. “Recognized immensely for the advertisements and sponsorships, this is the event of all events for them to showcase their brands in unique ways that will get people talking. With increased emphasis on leveraging online channels, the week leading up to the event saw the advertisers and sponsors launching online campaigns  which resulted in brand discussions that occurred before the game and extended well past the main event.”

On Facebook, Engagement Labs’ data found that during the week of the Big Game, advertiser, TurboTax, ranked first with the highest eValue score. Budweiser, who placed third overall, had an early release of its commercial starring Dame Helen Mirren, which topped many favorite advertisement lists for this year’s game. The brand, also having one of the most highly talked about ads during the 2015 game, had one of the highest Impact scores and Responsiveness scores along with the highest number of likes per 1,000 fans during the day of the Big Game.

When Engagement Labs looked at the brands follower growth on the day of the Big Game, the Company found that Walt Disney Studios gained the most followers on Facebook with 27,776 new followers. This was due to the release of the latest trailer for the highly-anticipated film, The Jungle Book.

On Twitter, Avocados in Mexico ranked first with the highest eValue score. With the early reveal of its Scott Baio-helmed commercial, #AvosInSpace, the brand also secured the highest Responsiveness score of the top ten. Apartments.com, whose commercial featured Lil Wayne and Jeff Goldblum, garnered one of the highest number of favorites and mentions per 1,000 fans during the game, along with scoring the second highest overall eValue ranking. Doritos had the largest follower growth on Twitter with 4,685 new followers.

On Instagram, Pokémon took the first spot with the highest eValue and Engagement score during the week of the game. The brand released teaser images leading up to the game and encouraged fan interaction by asking fans to spot and comment on the Pokémon references in the commercial, amplifying engagement with the channel.

Amongst the sponsors, Yahoo! placed first on Facebook with the highest Impact score. Dignity Health ranked first for Engagement, while tenth-place finisher, Seagate, scored the highest for Responsiveness. With the event taking place at the Levi’s Stadium in Santa Clara, sponsor Levi’s experienced the largest fan growth on Facebook the day of the Big Game, with 7,069 new fans.

On Twitter, San Francisco Travel scored the highest for both eValue and Engagement scores and Old Navy placed second with the highest Responsiveness score. Fifth-place brand, Google, scored the highest Impact and also had the largest amount of followers and increased its follower base by 78,561 during the week of the game.

On Instagram, San Francisco Travel placed first again with the highest eValue and Engagement scores during the week of the game. San Francisco 49ers secured second place with the highest Impact score or 86.0, out of the possible 100, while SAP placed third overall along with an impressive Responsiveness score.

“Social media provides the perfect avenue for advertisers and sponsors to leverage event affiliation and get consumers talking about the brand leading up to and during the game, as highlighted by the immense success of early commercial releases,” continued Segal. “The Big Game has become an omni channel event for advertisers and sponsors to create conversations about their brand both online and offline and we are seeing the success of this as word of mouth conversations around the Pro Football Championship leading up to and after the Big Game continues to increase year over year.”

According to Keller Fay Group’s TalkTrack® research on word of mouth conversations surrounding the league, has steadily risen over the past three years. “Based on recent trends we expect that well over 200 million conversations about the NFL will take place during the weeks surrounding the Big Game. With the continuous rise in popularity of the sport league in both the online and offline worlds, as well as the mass reach of the event, it is evident that the Big Game is at the center of all conversations,” noted Segal.