It’s a Hole-in-One! Brands Tee Off for Number One Spot on Social Media During PGA Championship

TORONTO, ON--(Marketwired - Aug 19, 2015) -  One of the biggest golfing events isn’t only played on the course, it’s also played on social media by the brands that drive millions into player endorsements, event sponsorships and advertising. Technology and data company, Engagement Labs (TSXV:EL), creator of the eValue™ score, today released the top performing sponsors from the 2015 PGA Championships on Facebook, Twitter and Instagram.

According to eValue data, the brands that were the top performers on social media during the PGA Championship were: 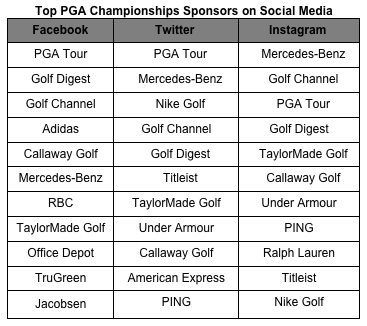 The PGA Tour ranked first on both Facebook and Twitter. The PGA Tour’s strong eValue was driven primarily by an impressive Impact score of 95 (out of the possible 100). Frequent real-time postings along with the use of a custom hashtag, “TheseGuysAreGood,” contributed to their high score. Also, the channel garnered the highest retweets and favorites per every 1000 followers.

“The PGA Championship has become one of golf’s most popular majors. Thanks to some of the sport’s rising young stars like Jordan Spieth and Rory Mcllroy, the world’s top brands have been circling the green’s to get in on the action and attract younger demographics that regularly use a second screen while watching TV,” said Bryan Segal, CEO of Engagement Labs. “Advertisers are leveraging the event online and taking the conversation on social media to get fans and amateur players interested in their products to drive sales and revenue.”

On Instagram, Mercedes-Benz had the top eValue score amongst event sponsors. The creative use of user-generated content led to an Engagement score of 91. Combine the Company’s strong engagement, along with its 2.8 million follower base, and the Company generated an Impact score of 91.

Besides Mercedes-Benz, the other top performing brands were golf-specific. For instance, Golf Channel, PGA Tour and Golf Digest Magazine were ranked second, third and fourth. Overall the data shows that both Facebook and Twitter had lots of engaging fans, however, where sponsors really excelled was Instagram, demonstrating how impactful the aesthetics play into social media in regards to a sport as visual as golf.

Engagement Labs (TSX VENTURE: EL) offers intelligent social data, analytics and insights for organizations that are actively engaging on social networks. Offered as a SaaS or through an API, the eValue analytics platform allows brands to measure and maximize the effectiveness of their social media marketing campaigns, as well as measure that of their competitors across major social networks Facebook, Twitter, YouTube and Instagram. Additionally, through the Keller Fay Group division of Engagement Labs, brands can also measure the marketing performance of offline word of mouth conversations. Engagement Labs maintains offices in Toronto and New Brunswick, New Jersey. www.engagementlabs.com /www.evaluesuite.com