NEW YORK, NY (January 30, 2018) – The telecommunications industry is in a continual state of disruption, with smartphones, wearables and virtual assistants becoming ever more present in consumers’ lives. Along with these changes, marketers are working within a highly competitive market and to be heard, they must find new and compelling strategies to get consumers to talk about their brands and thus drive sales. To help telecommunications product and service marketers better understand which brands consumers are talking about with family, friends and peers, both offline (face-to-face) and online (social media), Engagement Labs released its latest TotalSocial® rankings of social influence among telecom brands in the U.S.

The analysis looks at how each telecommunications brand has performed in consumer conversations over the last six months, compared to the six month period ending May 2017. According to the report, Samsung moved up one spot into first place, but T-Mobile and MetroPCS realized the biggest gains. T-Mobile jumped into second place from tenth, while MetroPCS rose six spots, making its debut in the top 10 at number nine. The biggest loser was Android, which dropped into seventh place from first. The iPhone didn’t fare much better, falling five spots to 10th.

The analysis, which is unique in that it combines offline and online consumer conversations, is based on Engagement Labs’ proprietary TotalSocial data and analytics, which continuously measures the most important drivers of brand performance in both face-to-face and social media conversations. The brands in the top 10 have earned the highest TotalSocial scores in the category for the last six months. 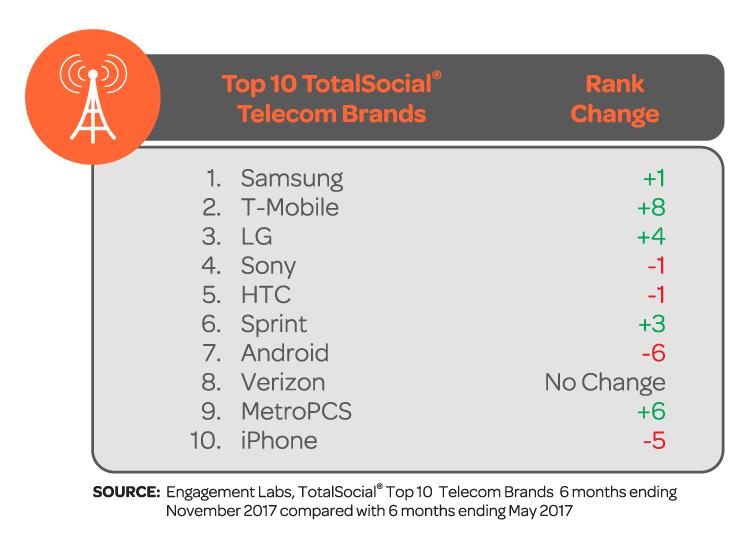 According to Engagement Labs’ report, T-Mobile’s rise was fueled largely by an increase in online sentiment, which is the share of social media conversation that is positive about a brand. Improvements in its online influence score, which measures the extent to which an influential audience is advocating for the brand in social media, was also a factor. The company recently began offering “Netflix on Us,” a free Netflix subscription for customers, and reported record financial results for Q3 2017 .

Likewise, improvements in online sentiment and online influence propelled MetroPCS into the top 10. The brand also realized a substantial increase in its offline influence score, which measures the extent to which everyday influencers, who have large social networks, talk about a brand in face-to-face conversations. Two well-timed promotions—one offering two unlimited lines for $75 that appeared early in 2017, and a second holiday offer—contributed to its higher scores.

“Innovation and value are the key factors driving sentiment for mobile phone service providers,” said Ed Keller, CEO of Engagement Labs. “Consumers want to own the latest and greatest when it comes to smartphones, but they also don’t want to pay a premium for data plans. Brands that deliver cutting-edge technology coupled with more affordable rates are more likely to generate positive conversations, both offline and on social media.”

LG, the other big gainer in the latest analysis, benefited from the release of its new flagship phone, the V30, featuring such innovations as advanced multimedia capabilities and fast wireless charging. According to the Engagement Labs’ analysis, the brand’s “This is Real” video and social media campaign contributed to an increase in its online brand sharing score, which measures the extent to which people share the brand’s marketing content in social media.

Sentiment, both online and offline, was the driving factor behind the fall of both Android and the iPhone in the rankings, Engagement Labs found. Rumors about Google’s new Fuchsia OS rendering the Android OS extinct, and the news that Apple has been intentionally slowing down older iPhones, drove these scores lower.

About Engagement Labs
Engagement Labs (TSXV: EL) provides the world’s leading brands with a unique and powerful way to drive sales and improve marketing ROI. Our TotalSocial® technology platform combines social media listening metrics and with the world’s only ongoing measure of offline word of mouth into a single, integrated solution, to allow marketers the ability to measure performance, diagnose areas of weakness and opportunity, and identify specific strategies and tactics to increase sales and improve marketing ROI. Our proprietary predictive analytics tie TotalSocial metrics to critical business outcomes. Engagement Labs has offices in the US, the UK and Canada.

Disclaimer in regards to Forward-looking Statements