Highest-Paid YouTube Stars Rhett & Link, Superwoman and PewDiePie Get the Thumbs Up on Social Media 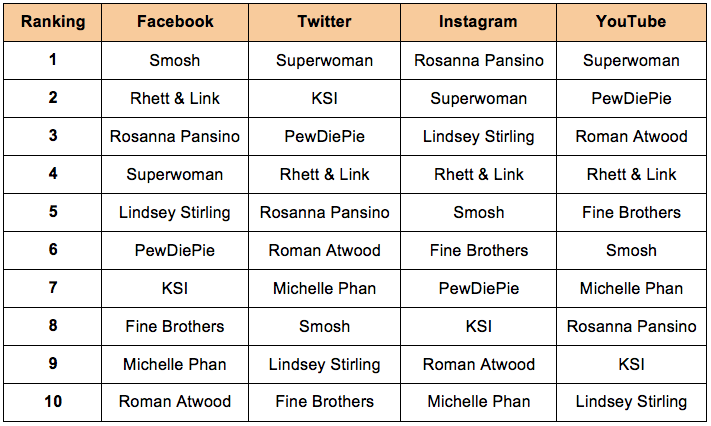 “YouTube has become a force to be reckoned with in the social media world. The channel is not just an online video-streaming service, but has become a medium for launching careers and generating significant endorsement deals,” stated Bryan Segal, CEO of Engagement Labs. “We’ve seen an immense rise in popularity of vloggers (video bloggers) on YouTube, with the most popular ones raking in millions of subscribers and millions in brand endorsements. Based on our eValue data, it’s obvious these YouTube experts know how to leverage their different channels to support their careers.”

Smosh, who tied for second place on Forbes’ highest-paid YouTuber list, ranked first on Facebook with the highest overall eValue score, highest Impact score of 96.63 out of a possible 100 and the largest number of fans. Comedy duo Rhett & Link were a close second with an eValue score of 93.07 and the highest Engagement score of 94.59. The duo posted snappy and witty content on Facebook that supported their style of humor on their YouTube channel, ultimately gaining them the most number of likes per 1,000 fans.

On Twitter, Lilly Singh, known by her YouTuber moniker Superwoman, ranked first with an eValue score of 94.14 and the highest Engagement score of 90. Superwoman used humor to engage her loyal fan base, often tweeting what appears to be random, funny thoughts. Followed close behind was KSI, with an overall eValue score of 93.69. While KSI ranked higher on the Forbes list than Superwoman, he trailed her with respect to eValue scores on Twitter. Highest-paid YouTuber, Felix Kjellberg, better known as PewDiePie, ranked third on Twitter boasting the highest Impact score, the largest number of followers and the most growth in followers.

“As we’re seeing on Facebook and Twitter, the number of followers does not always translate to most successful social media strategy,” continued Segal. “In the case of PewDiePie, the YouTuber has a much larger following, but his peers with smaller audiences have excelled online by building a more loyal and targeted follower base. Fans are voluntarily tuning into these channels because they thoroughly enjoy their content, thus as a YouTuber, it’s a matter of targeting your content to the interests of your audience.”

On Instagram, self-trained chef Rosanna Pansino, ranked first with an impressive Engagement score of 94, indicating that her fans actively like the images she posted of her many dishes, pets dressed in food costumes and meetings with fans. Superwoman ranked a close second with a much higher follower number than Rosanna Pansino. PewDiePie once again ranked first for Impact with the highest number of followers and the largest follower growth.

Turning to YouTube, Superwoman ranked first with an eValue score of 94.92, followed closely behind by PewDiePie, with the highest Impact score of 97.81. With the largest number of subscribers of the group, PewDiePie also experienced the most number of overall video views of the group. However, it was comedy duo Rhett & Link, who ranked fourth overall, who created the most engagement amongst fans with an Engagement score of 91.56. They also had the highest comments and likes per 1,000 fans.

“Overall, we are seeing YouTubers leveraging different social channels to support and drive traffic to their main platform - YouTube,” noted Segal. “The vloggers who leverage the likes of Twitter, Facebook and Instagram, such as Rhett & Link and Superwoman, are experiencing the most positive returns on their YouTube channel. However, one area of improvement for all YouTubers is to improve their response strategies. With Responsiveness scores relatively low across all channels, YouTubers who are looking to improve their social media performance should focus on creating two-way dialogue with subscribers.”