TORONTO, ON – January 14, 2016 – Less than a week after the 2016 Consumer Electronics Show (CES), technology and data company Engagement Labs (TSXV:EL), creator of the eValue™ score, released its Total Social™ data rankings on the top consumer electronics brands both on social media and through word of mouth (WOM) conversations in the U.S. 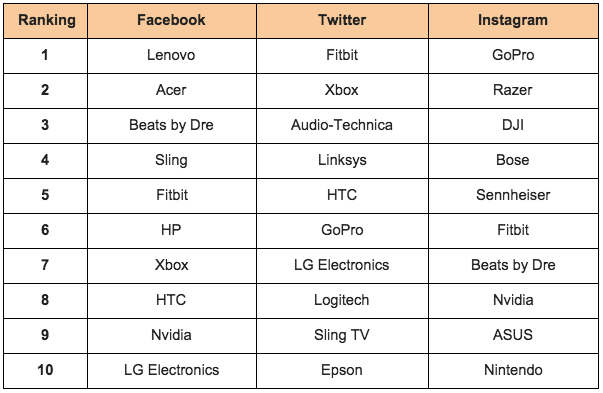 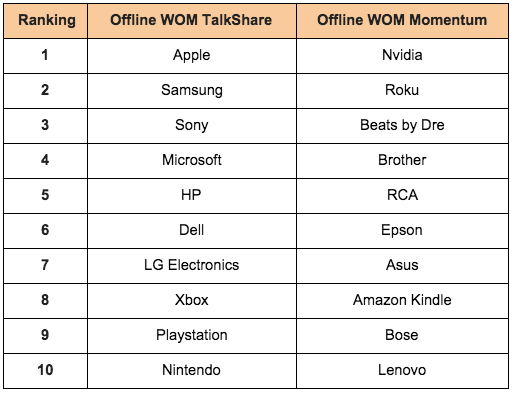 “Social media is a prime tool for consumer electronic brands to leverage as they compete for market share, aim to build hype and get their target consumers talking about their brand both online and offline. For up and coming brands, a strong social media strategy can be the perfect tool to attract potential consumers, build brand affinity, create offline conversations and keep your products top of mind during the purchasing cycle,” stated Bryan Segal, CEO at Engagement Labs.

Computer technology company, Lenovo, secured the top spot on Facebook, while also garnering the highest Engagement score. The brand’s most engaged posts highlighted the products which were revealed at the 2016 Consumer Electronics Show (CES), accompanied with the hashtag #CES2016, ultimately generating up to 158,200 likes per post. The brand also saw the highest fan growth on the channel, demonstrating how affiliating your brand with popular industry events can increase reach and engagement among relevant social media communities. Acer also leveraged its attendance at CES 2016, placing second for overall eValue score. It also had the second highest Engagement score. Xbox, despite the eighth place ranking for eValue score, had the highest Impact score. Although the brand has one of the highest followings, it lacks high levels of engagement and interaction from fans.

On Twitter, Fitbit secured first place in the eValue rankings and is the only brand to rank within the top ten in all three social media categories. The brand also had the highest number of mentions per 1,000 fans. Xbox placed second overall and, similar to the brand’s ranking on Facebook, had the highest Impact score. The brand also saw higher levels of engagement from followers on Twitter. Sling TV ranked ninth for overall eValue score, but had the highest Engagement score of 94.18. The brand followed a similar strategy to Lenovo on Facebook by posting frequently from CES 2016 and applying the #CES2016 hashtag to its tweets.

GoPro dominated on Instagram, while boasting the highest Engagement, Impact and follower growth. “Instagram is the perfect channel for GoPro, as the brand takes advantage of the visual platform to post user-generated content from fans who use their product,” noted Segal. “What is also interesting is that no one brand ranks in the top five across all three platforms. Instead brands are focusing their efforts primarily on one social media channel that best lends itself to the brand - for instance, GoPro on Instagram or Fitbit on Twitter.”

Gaming company, Razer placed second on Instagram with the highest number of likes per 1,000 fans. Razer posts images of the Razer team and its products at different launch events around the globe. This content humanizes the company and presents a more personalised interaction beyond its technology, which is successfully translating into likes and comments. Fitbit, ranked first for Responsiveness score with the highest number of admin comments - comments posted by the channel’s owners - and the highest response rate, thereby demonstrating dedication to its fans and its use of the social channel as a customer support tool.

“The consumer electronics industry is dominated by many ‘tech-giants’, but as seen by our eValue rankings, the size of the brand and sheer number of fans is not necessarily an indication of a successful social media strategy,” continued Segal. “In our rankings, we see brands like Fitbit and Razer leverage social media to engage audiences on a more personal level to create a community for members.”

As indicated by TalkTrack rankings, based on offline WOM TalkShare - the percentage of conversation an individual brand has relative to WOM for all brands in the category - large consumer electronics brands such as Apple, Samsung and Sony are generating the most conversations. However, when evaluating offline WOM momentum - the amount a brand’s offline WOM conversation has grown year-to-year - smaller and newer brands like Nvidia, Roku and Beats by Dre are demonstrating a growing influence in conversations among consumers.

“As smaller and newer brands are making marks in the online sphere through the use of social media, the online success is translating to growth in offline WOM conversations, and vice versa,” noted Segal. “It’s expected that the ‘tech-giants’ will lead the charge for offline conversations, but as they continue to lack emphasis on online fan engagement, the smaller brands who are focusing on social media strategies to stay top of mind among consumers will also propel themselves towards dominating offline conversations. Beats by Dre is a perfect example of this, as the brand ranks within the top ten on Facebook and Instagram, along with third place for offline WOM momentum.”