From Print to Screen: Engagement Labs Ranks the Top Magazines on Social Media

TORONTO, ON. – July 22, 2015 – Technology and data company Engagement Labs (TSXV:EL), creator of eValue Analytics™ and the eValue™ score, today released the rankings of the top men’s and women’s lifestyle magazines on Facebook, Twitter and Instagram.

Print magazine sales have been on a steady decline and according to Magazine Information Network, the number of magazines sold at retail decreased by 14.2% in the first quarter of 2015, compared to the same period last year.

The magazine publishing industry has embraced social media as a way to expand their reach, connect, and engage with audiences. Publishers are leveraging their social media channels to create new monetization opportunities for advertisers. With less money being spent on print and more advertising dollars going into digital, social media can help increase readership and impressions on their content.

Using the eValue scoring tool, Engagement Labs has ranked the top 20 men’s and top 20 women’s lifestyle magazines in the U.S. 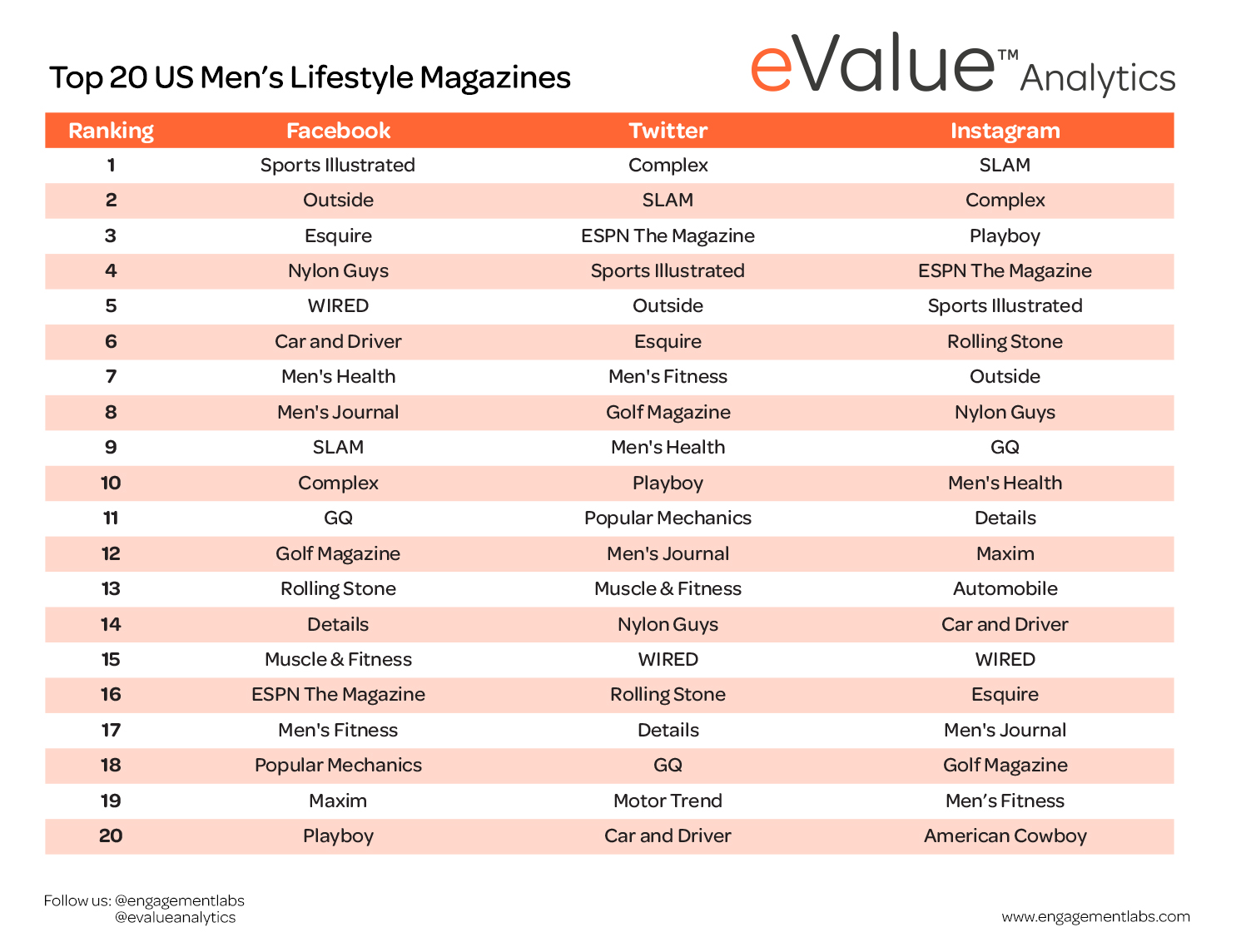 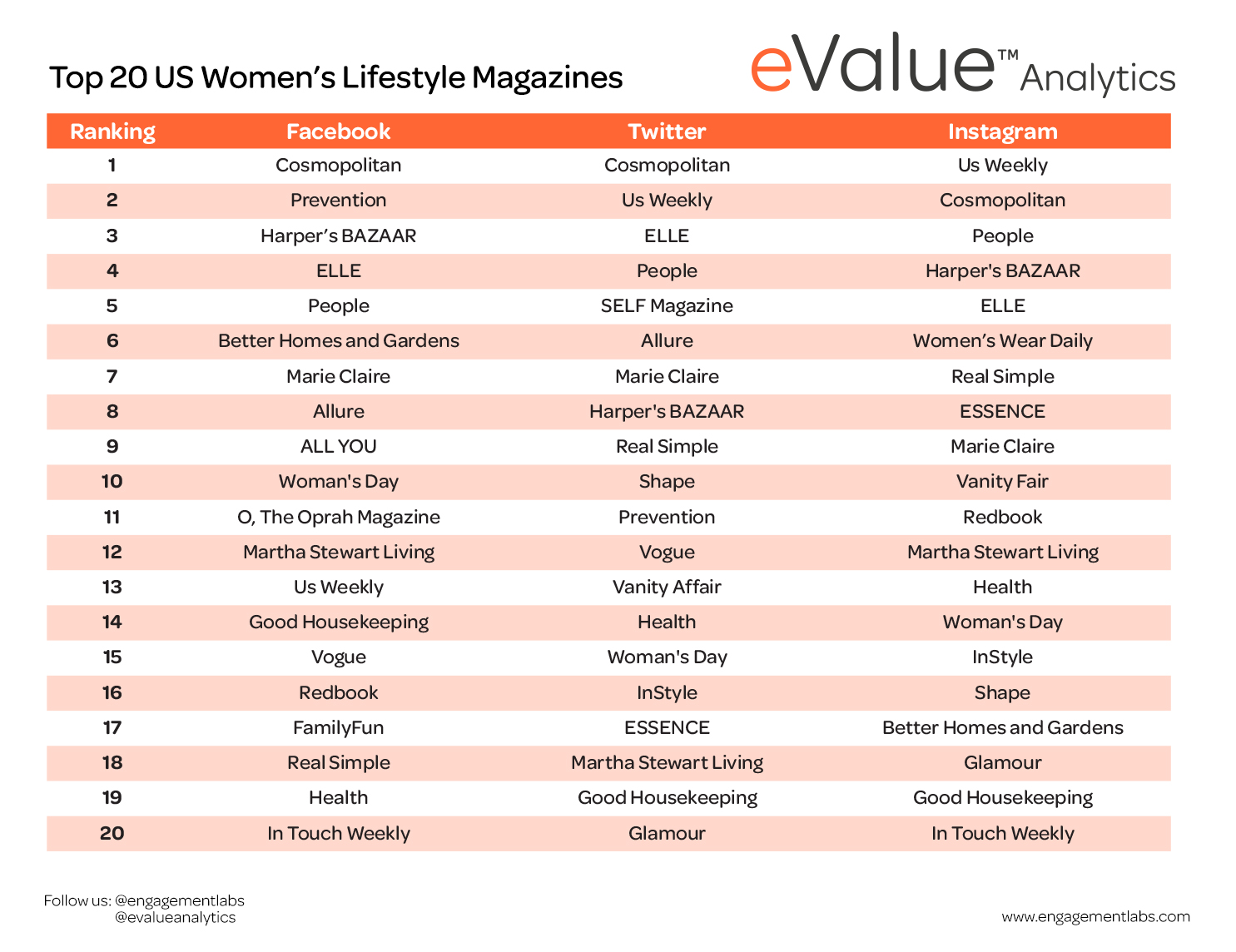 When looking at the men’s publications, Sports Illustrated ranked first with an eValue score of 97.66 on Facebook, which was the highest eValue score of all publications ranked in both men’s and women’s categories. The popular publication also had the highest Engagement subscore and the second highest Impact subscore. This indicates that their audience is active on their channels, and is also engaging and sharing their content, which is expanding its reach.

“On average we saw high eValue scores within the magazine industry. For these magazines, social media has become an avenue to reach an even broader audience. It is imperative for them to understand how their audience is engaging with their brand online and what content is having the biggest impact, not only for their brand but also their competitors,” said Bryan Segal, CEO of Engagement Labs.

For women’s publications, Cosmopolitan ranked number one on Facebook with an eValue score of 97.22 and had the highest Responsiveness subscore. Cosmopolitan also took the number one spot on Twitter with an eValue score of 78.93. The Magazine had the highest active user base and highest number of retweets and favorites per 1000 followers, which shows that a high percentage of their followers are actively engaging and sharing their content.

Magazines are leveraging Instagram as another way to engage their audiences by creating visuals that are creative and appealing to the eye. Celebrity entertainment magazine, US Weekly, had the highest eValue score on Instagram along with the highest Engagement subscore. They also had the highest amount of likes per 1000 followers, showing that they are creating engagement through their posts which feature images of celebrities, the red carpet at awards shows, street style photos and paparazzi pictures.

“Given its size and impact, social media continues to be a significant platform for marketers and advertisers to allocate their budgets. Simply looking at a channel’s follower numbers, or how many likes a piece of content gets, is not enough. In today’s social landscape, brands need to really understand how their followers are engaging and interacting with them and that is where a brand’s eValue score can be essential, especially when looking at the publishing industry,” noted Segal.

Overall, while Engagement and Impact subscores performed higher than average in the men’s and women’s magazine category, Responsiveness scored below average. Responsiveness measures how much, how fast and how well a publisher responds to actual conversations amongst its users. This remains an opportunity for magazine publishers to drive greater conversation and harvest their community to a greater extent. By utilizing community management and creating more engaging dialogue, this can enable the development of loyal audiences and can generate greater reach and impressions.

For more information on eValue™ or to request a demo, visit www.evaluesuite.com or contact us at: sales@engagementlabs.com

The eValue™ score measures the effectiveness of a brand’s overall social media performance on Facebook, Twitter, YouTube and Instagram and provides a score from 0 - 100. It’s the aggregate of the three subscores including Engagement, Impact, and Responsiveness that work together to create one top-level KPI. Our subscores are calculated by using hundreds of sub metrics which are then benchmarked against a hand-picked database of 100,000 verified brand accounts on each channel.

Engagement: Measures the level of interaction generated by your content and how well your community reacts to it.

Impact: Measures how many unique users have potentially been exposed to a piece of content posted by the channel’s admin through organic, viral and paid reach.

Responsiveness: Measures the rate, speed and quality of your responses to fans.