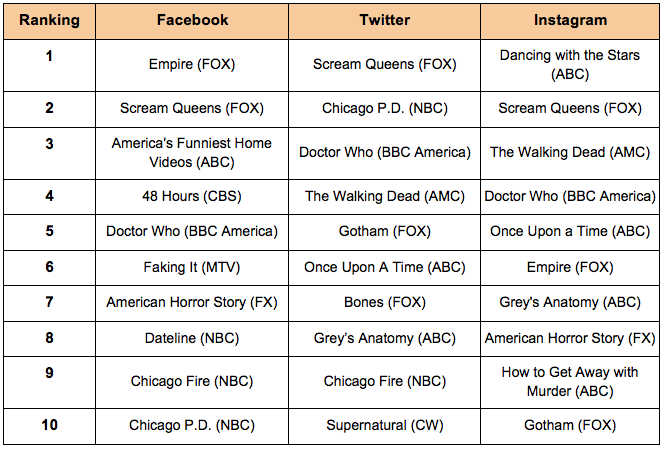 “It is no secret that audiences are not tuning in to watch live programming as frequently as they once were, which remains a challenge for TV networks to reach its audiences and receive key advertising dollars,” said Bryan Segal, CEO of Engagement Labs. “To ensure increased viewership and successful ratings for new and returning shows, TV networks need to focus on marketing its shows via different avenues such as social media to generate buzz and on-demand viewing. Living in a digital era, social media provides the perfect opportunity for these networks to tap into audiences and expand its fan bases through online tactics.”

On Facebook, the FOX network dominated the overall rankings with its hit returning show Empire, ranked first, and followed closely by its newest hit show Scream Queens, with an eValue score of 95.01 out of the possible 100. Through a combination of frequently posted content and a highly active user base, both shows scored impressively high in Engagement and Impact.

However, it was ABC veteran show, America’s Funniest Home Videos, who scored the highest for Engagement and Impact, with scores of 95.33 and 95.61, respectively. With the highest number of posts and largest fan growth, the TV show leverages video clips to ensure its fans are constantly able to interact with the page through likes, shares and comments. The show is a great example of how humorous and sharable content can engage online audiences and increase reach. FOX’s hit shows may have dominated the top rankings on Facebook, but three NBC shows made it into the top ten, Dateline, Chicago Fire and Chicago P.D., with Dateline scoring the highest for Responsiveness among all shows ranked.

On Twitter, Scream Queens emerged on top with the highest overall eValue score and had the highest Impact and Responsiveness scores. With respect to Engagement, Chicago P.D. took top rank with a score of 77.29. When comparing networks, Engagement Labs found that ABC had a stronger showing on Twitter than Facebook, with two of its shows, Once Upon a Time and Grey’s Anatomy, ranked in the top ten.

“As we’re seeing on Facebook and Twitter, major networks like FOX, ABC and NBC continue to release TV shows geared toward its network’s demographic, generating a loyal following and resulting in increased engagement on social media,” continued Segal. “On the other hand, niche networks also generate strong social media followings and engagement. For example, BBC America’s Doctor Who ranked in the top five for both channels and MTV’s Faking It and AMC’s The Walking Dead both broke into the top ten. You do not have be the largest brand or have the most resources to succeed on social media, you just have to understand your audience and feed them the content they desire.”

On Instagram, ABC’s Dancing with the Stars secured the top spot with the highest overall eValue score of 96.4 and the top Responsiveness score. Close behind was Scream Queens which ranked second with an eValue score of 94.46 and highest Engagement score of 97. Coming in at third place, The Walking Dead had the largest following and highest Impact score of 91.0. The show, now in its sixth season, also had the highest follower growth amongst its peers.

“With so many streaming services and online viewing options, TV networks have to capitalize on the fact that fans are turning to the Internet for both viewing purposes and to interact with online communities to discuss their favorite shows. Based on our data, it’s evident loyal fan bases still exist. Despite lower TV ratings, networks just have to continuously engage online audiences to ensure they stay loyal,” noted Segal.