Engagement Labs Ranks How U.S. Presidential Candidates Performed on Social Media Before and After the Second Republican Debate

Leading up to the debate, Donald Trump was ranked number one on Twitter and Mike Huckabee lead the pack on Facebook according Engagement Labs’ eValue score. 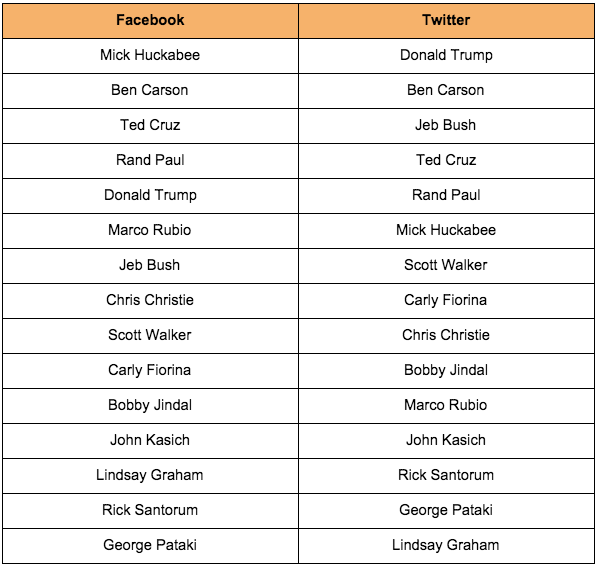 With a pre-debate eValue score of 96.1, out of the possible 100, Mike Huckabee ranked first on Facebook. Huckabee leveraged the channel in the days leading up to September 16th by reminding his followers of his stance in three key debate issues - Israel, Planned Parenthood and Religious Freedom.

The quiet contender, Ben Carson, sat at second place with an eValue score of 95.02. Pre-debate, he turned to his Facebook page to promote his recent rise in the polls and to thank his following for the support. Carson frequently uses his Facebook channel to connect with his audience in a more personal way. Often answering personal questions from supporters to provide them the opportunity to learn more about him as an individual, beyond his position as a politician, which has helped to drive forward his Engagement subscore.

Trump, holding the first spot on Twitter with an eValue score of 82.66, has remained true to his strategy of using this platform as his primary channel of communicating to his supporters. Trump held the highest Engagement and Impact subscores of the group using the channel to discuss his stance on veteran affairs and retweeting supportive tweets from followers, which encouraged further engagement among fans. 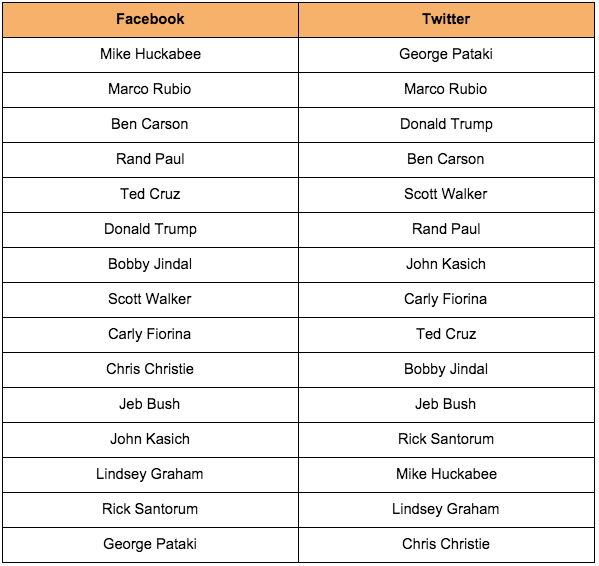 “During the debate last night, we saw two Republican candidates steal the spotlight from Trump, not only during the debate but also on social media. When we looked at our Value rankings leading up to the second debate,Trump and Carson had been strong on Twitter but last night we saw George Pataki and Marco Rubio climb to the top and increased their eValue scores by almost 20 points,” said Bryan Segal, CEO at Engagement Labs. “Underdog Carly Fiorina, noted by many for winning the second debate, remained in the 8th spot on Twitter but was able to increase her Engagement subscore by almost 10 points which indicates that her content has been resonating well with her followers. Fiorina also  had the third highest follower growth behind Trump and Carson.”

Jeb Bush has not only seen a decline in the polls but also on social media. Engagement Labs found that his eValue score decreased, moving him from third to eleventh place on Twitter, partially due to his decrease in his Engagement subscore.

When looking at the candidate's performance on Facebook, Fiorina moved up from tenth to ninth place and had the highest active user base of the group, meaning she had the highest percentage of followers actively engaging with her channel. Mark Rubio, another strong contender from last nights performance, took the second place spot from Carson and increased his Engagement subscore by almost seven points. However, Carson had the highest fan growth and highest number of likes, shares and comments of the group.

“The American people have and will continue to leverage social media as a way to connect and learn more about the candidates.  It is a powerful platform that enables candidates to not only share news, opinion and content but creates an opportunity to influence the public,” continued Segal.

eValue™ is the global benchmark for social media scoring, leveraging more than 300 conventional social media metrics to provide a single comprehensive and benchmarked score for marketers, advertisers and broadcasters across the globe. The tool’s three key metrics are Engagement, Impact and Responsiveness, benchmarked against 100,000+ handpicked verified brands.

Engagement Labs (TSXV:EL) offers intelligent social data, analytics and insights for organizations that are actively engaging on social networks. Offered as a SaaS or through an API, the eValue analytics platform allows brands to measure and maximize the effectiveness of their social media marketing campaigns, as well as measure that of their competitors across major social networks Facebook, Twitter, YouTube and Instagram. Additionally, through the Keller Fay Group division of Engagement Labs, brands can also measure the marketing performance of offline word of mouth conversations. Engagement Labs maintains offices in Toronto and Princeton, New Jersey. www.engagementlabs.com / www.evaluesuite.com