Samsung and Sony Lead in Consumer Chatter with T-Mobile as Top Carrier, while HTC and MetroPCS Lose Signal, According to Analysis of Online and Offline Media Conversations

NEW YORK, NY (June 28, 2018) – Engagement Labs (TSXV: EL) (OTCQB: ELBSF), an industry-leading data and analytics firm that focuses on the entire social ecosystem and its impact on business, today released its TotalSocial® ranking of the top telecommunications brands in the U.S. based on social influence.

The analysis is unique in that it combines offline and online consumer conversations, and is based on Engagement Labs’ proprietary TotalSocial data and analytics, which continuously measures the most important drivers of brand performance in both face-to-face (offline) and social media (online) conversations. The brands in the top ten have earned the highest TotalSocial scores in the category for the last six months, compared to the Company’s previous ranking in January 2018. 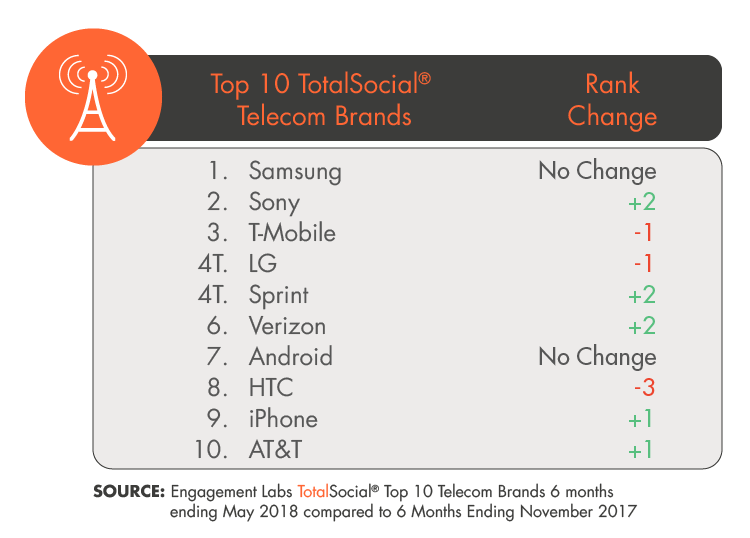 According to Engagement Labs’ report, Sony jumped up two spots in the ranking into the number two position due to an increase in both online influence and online sentiment—which demonstrates that a more influential group of consumers are talking about the brand via social media, and that those conversations are more positive. In early 2018 at the Consumer Electronics Show (CES), the brand unveiled its Xperia series, a trio of phones that can take 120-degree selfies at 8 megapixels which became available in the U.S. in April.

“The way consumers talk about telecommunications brands is primarily driven by product launches, unique features and customer service,” said Ed Keller, CEO of Engagement Labs. “With so many competing mobile brands and service providers, it is imperative for telecom marketers to understand what drives a positive reaction among consumers and capitalize on these drivers to differentiate themselves in a crowded marketplace.”

With the largest decline among the top 10 telecom brands, HTC slipped down three spots to eighth place due to a decline in offline brand sharing, or the amount of consumers talking about a brand’s marketing campaigns in face-to-face conversations.

In contrast, Sprint made its way up two spots to tie with LG for the fourth position due to an increase in sentiment both offline and online, proving that consumers are speaking more positively about the brand in conversations happening face-to-face with peers as well as via social media. With the recent news of its merger with T-Mobile, which ranked two spots higher at number three, Sprint announced that the company will be led by T-Mobile CEO John Legere.

Verizon also found itself two spots higher in the ranking at number six, due to an increase in the amount of influential consumers who are talking about the brand, both online and offline. This can be attributed to the company’s recent announcement that it will launch a 5G wireless network in several parts of the U.S. in the second half of 2018.

Engagement Labs (TSXV: EL) (OTCQB:  ELBSF) is an industry-leading data and analytics firm that focuses on the entire social ecosystem and its impact on business. The Company’s TotalSocial® platform is the only platform that combines powerful online (social media) and offline (word of mouth) data with predictive analytics. Engagement Labs has a proprietary ten-year database of unique brand, industry and competitive intelligence. The Company’s cutting-edge predictive analytics uses machine learning and artificial intelligence to reveal the social metrics that increases marketing ROI and top line revenue for its diverse group of clients, consisting of Fortune 500 companies.