NEW YORK, NY (July 26, 2018) – Engagement Labs (TSXV: EL) (OTCQB: ELBSF), an industry-leading data and analytics firm that focuses on the entire social ecosystem and its impact on business, today released its TotalSocial® ranking of the top automotive brands in the U.S. based on social influence.

The analysis is unique in that it combines offline and online consumer conversations and is based on Engagement Labs’ proprietary TotalSocial data and analytics, which continuously measures the most important drivers of brand performance in both face-to-face (offline) and social media (online) conversations. The brands in the top ten have earned the highest TotalSocial scores in the category for the last six months, compared to the Company’s previous ranking in October 2017. 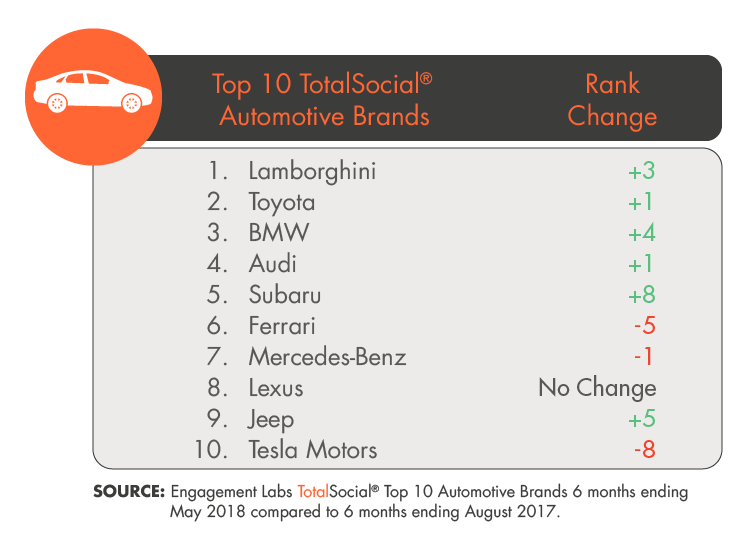 BMW, another brand which saw an increase in online sentiment and influence, bumped up to third place in the top ten from its previous ranking as number seven. The company recently engaged its most influential consumers through the launch of its subscription service, “Access by BMW,” a pilot program which offers its members access to a diverse fleet of BMW vehicles in exchange for a monthly subscription fee.Luxury automotive brand Lamborghini rose to the top spot in the ranking, from its previous position at number four, due to an increase in online sentiment and offline influence—demonstrating that consumers are talking more positively about the brand via social media, while a more influential group of consumers are spreading the word about the brand in face-to-face conversations. In December 2017, the brand announced its new SUV that is set to hit the market this summer, marking the first time Lamborghini has included an SUV in its product line in more than 20 years.

The biggest improvement among the top ten came from Subaru, which moved up the ranks by eight spots all the way to fifth place due to a spike in both online and offline sentiment. Customers of Subaru are known to be fiercely loyal to the brand, and its popular “Share the Love” campaign, which is in its tenth year, includes a donation to a charity of the customer’s choice when they purchase a Subaru.

“What’s most striking about the TotalSocial automotive rankings is that Toyota is the only true mass-market brand that made it into the top ten—which is missing the big American automakers such as Ford, Chevrolet, and Chrysler,” said Ed Keller, CEO of Engagement Labs. “The brands that moved up in the rankings generally have a story to tell, and without a story it’s hard for a brand to make its way into consumer conversations, even when you have a ton of customers as the mass-market brands do.”

While many brands saw an increase and were lifted higher in the ranking, others didn’t fare as well. For example, Ferrari fell from first place in the ranking down to sixth place. The luxury automaker dropped due to a large decline in the number of influential consumers talking about the brand via social media and face-to-face conversations, as measured by Engagement Labs’ online and offline influence scores. Meanwhile, Honda, which recently reported trouble with sales of its 2018 Accord, fell out of the top ten ranking completely due to a decline in online and offline influence, placing it at number 15.

In addition, Tesla dropped from its number two spot from the previous ranking down to number ten. Tesla’s decline in the top ten can be attributed primarily to a decrease in online sentiment. The brand failed to generate positive conversations in light of its recent controversies surrounding production issues with its Model 3 as well as another death linked to the company’s autopilot system.

Engagement Labs (TSXV: EL) (OTCQB: ELBSF) is an industry-leading data and analytics firm that provides social intelligence for Fortune 500 brands and companies. The Company’s TotalSocial® platform focuses on the entire social ecosystem by combining powerful online (social media) and offline (word of mouth) data with predictive analytics. Engagement Labs has a proprietary ten-year database of unique brand, industry and competitive intelligence, matched with its cutting-edge predictive analytics that use machine learning and artificial intelligence to reveal the social metrics that increase marketing ROI and top line revenue for its diverse group of clients.