TORONTO, ON – January 28, 2016 – Technology and data company Engagement Labs (TSXV:EL), creator of the eValue™ score, today released a ranking update on the eValue rankings for the top U.S. online digital publications and traditional print newspapers on Facebook and Twitter. 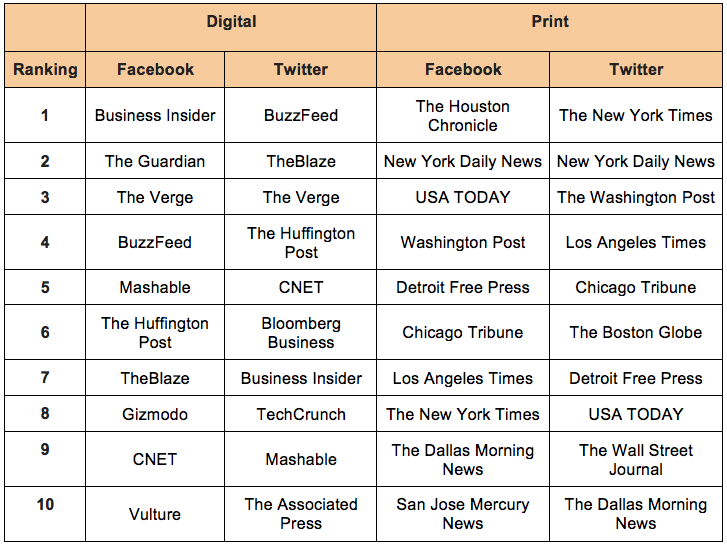 "The times are changing, and so is the way in which people consume news. Social media has provided news outlets the opportunity to get stories out to audiences in real-time," stated Bryan Segal, CEO at Engagement Labs. "Over the last few months, we've seen news outlets maintain focus on developing social media strategies that incorporate sharing as much news content as possible, as these social channels have become a legitimate, go-to source for audiences to keep up with current events."

Looking exclusively at online digital publications on Facebook, Business Insider dominated with the highest eValue score and the highest Impact score, rising one spot from the previous rankings by reporting on major news stories revolving musicians, athletes and technology giants like Facebook's Mark Zuckerberg. The Guardian came in at a close second for its overall eValue score and had the highest Responsiveness score of the top ten news outlets. However, Responsiveness for digital publications is on average low.

Previous first place finisher The Verge dropped to third place, while BuzzFeed climbed four spots to fourth place with the highest number of likes per 1,000 fans. Highest Engagement was awarded to TheBlaze, which placed two spots higher than the previous rankings at eighth for its overall eValue score. TheBlaze garnered the most shares per 1,000 fans, demonstrating the content posted is encouraging engagement amongst its niche fan base.

Examining traditional newspapers on Facebook, both print and digital news outlets are doing exceptionally well on the channel; however, print publications are outperforming digital publications in the top rankings for eValue scores. The Houston Chronicle ranked first for eValue score with the highest Responsiveness. New York Daily News raised one spot to second place with the highest Impact score. Previous first place finisher, USA TODAY, dropped to third place due to a decrease in its Responsiveness score over the last few months.

The Detroit Free Press significantly improved its Impact score in comparison to the previous year's rankings, breaking into the top ten to place fifth and scored the highest Engagement and most likes and comments per 1,000 fans The newspaper frequently posted news items focused on its sports teams, the automotive industry and Detroit-born celebrities, while also boosting its Responsiveness, the paper captured the attention of its online fan base ensuring higher scores across the board.

"News outlets, both digital and print, are not having trouble engaging fans on Facebook as the channel has become a major news source for audiences. With multiple sharing options, a trending section on news feeds and popular articles staying in users' newsfeeds for longer periods of time, users can easily view, like and comment on articles. Social media is proving to be beneficial for news outlets looking to expand the reach of its content," noted Segal. "As an industry we are still seeing low overall scores in the Responsiveness category. However, different from other industries which leverage their social media channels as an extension of its customer service, Responsiveness is less of a focus for news outlets, as delivering interesting and share worthy content, with frequency, is the main priority."

On Twitter, digital news outlets eclipsed print publications making up the top five overall news outlets on the channel. BuzzFeed remained in first place from the previous rankings with an eValue score of 83.89, out of the possible 100, and the highest Engagement score. Boasting the most active user base of the top ten, BuzzFeed also received the highest retweets and likes per 1,000 fans of the top ten, suggesting fans resonated well with the outlets timely, relatable and humorous content. TheBlaze climbed one spot to second place, displacing previous second-place outlet, The Verge, to third place. While digital news pioneer The Huffington Post raised five spots to fourth place, with the highest Impact and led the pack with the largest follower base.

Print publications saw a drop from the previous rankings, as the overall top five news outlets lacked the presence on Twitter that Engagement Labs found in digital publications. When examining traditional newspapers on Twitter, The New York Times jumped to first place for its overall eValue score. The publication also had the highest Engagement, Impact, and follower growth with a 6,438,323 increase in followers. New York Daily News fell one spot to second place, and garnered the highest active user base, along with the highest number of retweets and likes per 1,000 fans. Third place was earned by the Washington Post, which jumped five spots to number three and scored the second highest for Engagement.

"With Twitter's real-time nature, users turn to the channel for breaking news updates, whereas Facebook has been designed for sharing and commenting on articles," continued Segal. "When comparing these channels, it helps to explain the lower Engagement scores across Twitter for all news outlets, but particularly print publications which focused on posting lengthier pieces of content. On Facebook, news articles have longer shelf-life, while on Twitter you can easily miss many articles as your feed becomes cluttered. Thus, focusing on sharing breaking news updates on Twitter, while emphasizing prepared news articles on Facebook can help target the appropriate audiences on each channel."

Engagement Labs (TSX VENTURE: EL) offers intelligent Total Social™ data, analytics and insights for marketers and organizations enabling them to track, measure and benchmark the conversations happening around their brand or industry both online and offline. These conversations are proven to drive critical business outcomes, including sales, while Engagement Labs' tools provide data and actionable insight to help guide business decisions and power marketing effectiveness.

Engagement Labs' eValue™ Analytics tool is the global benchmark for social media scoring. eValue's proprietary data technology offers real-time analysis to measure a brand's social media and digital marketing efforts, distilling it down to a single meaningful number between 0 and 100 -- an eValue score. Composed of a series of metrics and Key Performance Indicators (KPIs), an eValue score measures social media Engagement, Impact and Responsiveness which is benchmarked against 100,000+ handpicked and verified brands. The Keller Fay Group, an Engagement Labs company, is the only firm to regularly measure offline conversation via TalkTrack®; independent research finds offline conversation is a significant driver of sales with twice the impact of online conversation.