Fully 15.5% of Democrats Talked About Bloomberg Last Week, versus 4.9% Who Say they Will Vote for Him

NEW YORK, NY (December 18, 2019) – More than half of Democrats (54%) are talking weekly about the candidates seeking their votes in the 2020 primaries, according to a new study released today. The new study, by Engagement Labs, reveals that Michael Bloomberg is getting a serious look by Democratic voters just three weeks after entering the race based on the fact that his word of mouth engagement exceeds his share of polling preference by the biggest margin of any candidate. Fully 15.5% of Democratic voters talked about Bloomberg last week, versus 4.9% who say they will vote for him according to the national polls.

The 10.6-point difference is the largest for any Democratic candidate, and Bloomberg’s word of mouth engagement exceeds that of Pete Buttigieg, putting him in the top four.

Word of Mouth Among Democrats vs. Polling 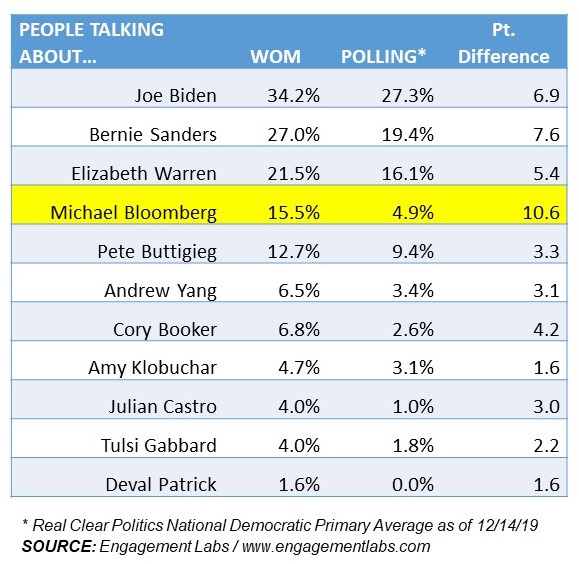 “These results reveal that Bloomberg has quickly earned his way into the top consideration set as reflected by his #4 ranking ahead of Mayor Pete,” according to Ed Keller, CEO of Engagement Labs which conducted the study and one of the nation’s leading experts on word of mouth. “We have built many predictive analytics models that demonstrate word of mouth is a powerful and leading indicator of future decisions,” Mr. Keller added.

The study also found that 41% of Bloomberg’s conversation sentiment is mostly positive, and 37% is a mixture of some positive and some negative. “We often see that media is a driver of consumer word of mouth, and media awareness often drives more positive sentiment for brands,” says Keller. “The next month will be pivotal to see whether Bloomberg’s media-based strategy is successful in converting chatter into positive advocacy for his candidacy.”

This Democratic Nomination Word-of-Mouth study was conducted online among 1,956 registered Democrats between December 13 and 16, 2019 by Engagement Labs, using sample and data collection technology provided by Dynata, the world’s largest first-party data and insights platform. Respondents reported on candidate conversations they participated in during the past seven days.  A more detailed analysis is available here.

Engagement Labs (TSXV: EL) is an industry-leading data and analytics firm that provides social intelligence for Fortune 500 brands and companies. The Company’s TotalSocial® platform focuses on the entire social ecosystem by combining powerful online (social media) and offline (word of mouth) data with predictive analytics. Engagement Labs has a proprietary ten-year database of unique brand, industry and competitive intelligence, matched with its cutting-edge predictive analytics that use machine learning and artificial intelligence to reveal the social metrics that increase marketing ROI and top line revenue for its diverse group of clients.