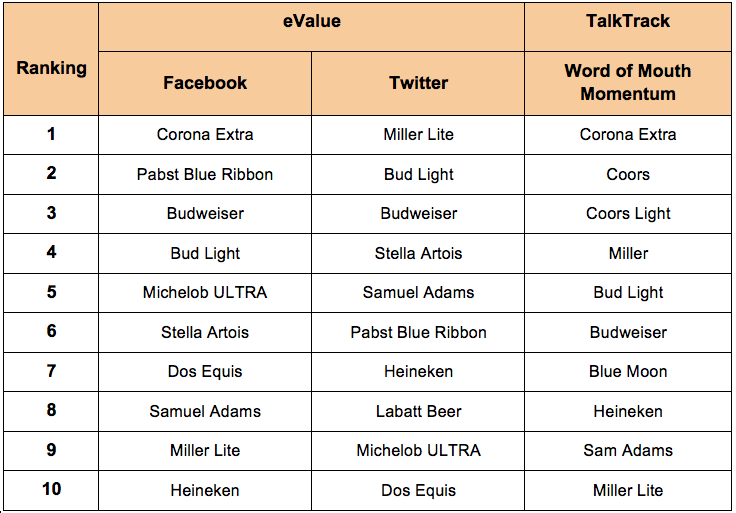 “Beer has immense appeal to a broad audience, therefore after analyzing dozens of beer brands, it’s no surprise to see the top U.S. beer brands making a significant impact on social media, indicating that their content is reaching the masses,” said Bryan Segal, CEO at Engagement Labs.

Corona Extra is a stand out in the rankings, with strong performance both in terms of its social media engagement as well as its WOM momentum. Momentum demonstrates the increase of brand mentions annually based on a six-month comparison. Corona Extra ranked first on Facebook with the highest overall eValue score and scored significantly above its peers with respect to Engagement and Impact. Online success of the beer brand also translated to WOM success, with Corona Extra scoring the highest for WOM momentum indicating that the brand’s marketing efforts are successfully driving conversation both on and offline.

Second place brand on Facebook, Pabst Blue Ribbon, was the most Engaged brand, scoring 68.49 out of 100, when isolating this metric. The brand’s frequent posts on the channel gave its followers ample content to engage with. Third place finisher Budweiser, which had the most followers in the top ten, led the pack for Responsiveness. Bud Light, which placed fourth, ranked the highest for Impact with a score of 83.94.

“The most successful beer brands that we have seen online are the ones using content to generate participation from their audiences,” continued Segal. “For example, Pabst Blue Ribbon shared artwork and images from their customers that incorporate the drink, while encouraging the use of their hashtags #Pabst or #PBR. Furthermore, Corona Extra took a similar approach posting professional photography of their beverage accompanied with food or beach scenery and asked a question to fans, which enabled their followers to engage with the post or tag a friend they knew would be interested.”

On Twitter, Miller Lite ranked first. The brand had the highest Twitter following and scored significantly higher than its peers when it came to Engagement and Impact, scoring 71.26 and 82.18, respectively. Taking advantage of their expansive reach, the brand consistently posted on Twitter using short, witty and entertaining content that caught the eyes of its audience. Bud Light, ranked second on Twitter, and had the second highest Responsiveness score, followed by Budweiser which was the most Responsive brand with a score of 48.14, more than double the group average score.

Measuring WOM momentum, Coors and Coors Light ranked second and third respectively, behind Corona Extra. When it comes to the quality of WOM conversation, Heineken, Sam Adams and Blue Moon are the brands with the strongest positive sentiment.

“Ultimately, online conversations can have a major influence on how much people talk about your brand and the word of mouth volume it receives. For example, Corona Extra’s online marketing efforts do not just focus on marketing their beer. The brand markets an experience, such as associating their beer with the enjoyment of a beachside vacation. It’s through marketing strategies like this that a brand stays relevant across various mediums and not just in the online space,” stated Segal.