Most Candidates Catching Up with Biden In Kitchen-Table Conversations Among Democrats, According to Latest Word-Of-Mouth Study

Biden and Sanders Neck-and-Neck, with Strong Sentiment Advantage for Sanders

Warren in Third Place; Bloomberg Ahead of Buttigieg

NEW YORK, NY (January 13, 2020) – Former Vice President Joe Biden remains the most talked about candidate for President among Democrats nationwide, but other candidates are catching up, notably Senators Bernie Sanders and Elizabeth Warren, as well as former New York City Mayor Michael Bloomberg, according to a new study completed by Engagement Labs before the January debate in Des Moines, IA.

Just over 1 in 3 Democrats (34.4%) reported having talked about Joe Biden in the prior 7 days, about the same as in a mid-December wave of the study. Meantime, Senator Sanders has risen 4 points, and trails Biden in Democratic conversations by only 3. All other top candidates also rose 3-5 points.

The December study stood out because it showed newly announced candidate Bloomberg at fourth place, ahead of Buttigieg who generally was ahead of Bloomberg in national polls at the time.  Bloomberg’s polling has risen since pulling him even with Buttigieg in several recent polls.

“Bloomberg’s rise in the polls in January is consistent with what we’ve seen time and again—word of mouth predicts future preferences and behavior,” said Engagement Labs CEO Ed Keller.

The study also gauges sentiment, where the leaders are Sanders, Buttigieg, and Warren for whom more than 60% of their conversations are “mostly positive” according to the Democrats. Since December, conversations are less positive for Klobuchar (-7 points) and Gabbard (-14), while sentiment about Bloomberg has risen 8 points to 49% positive, the largest gain among any candidate. 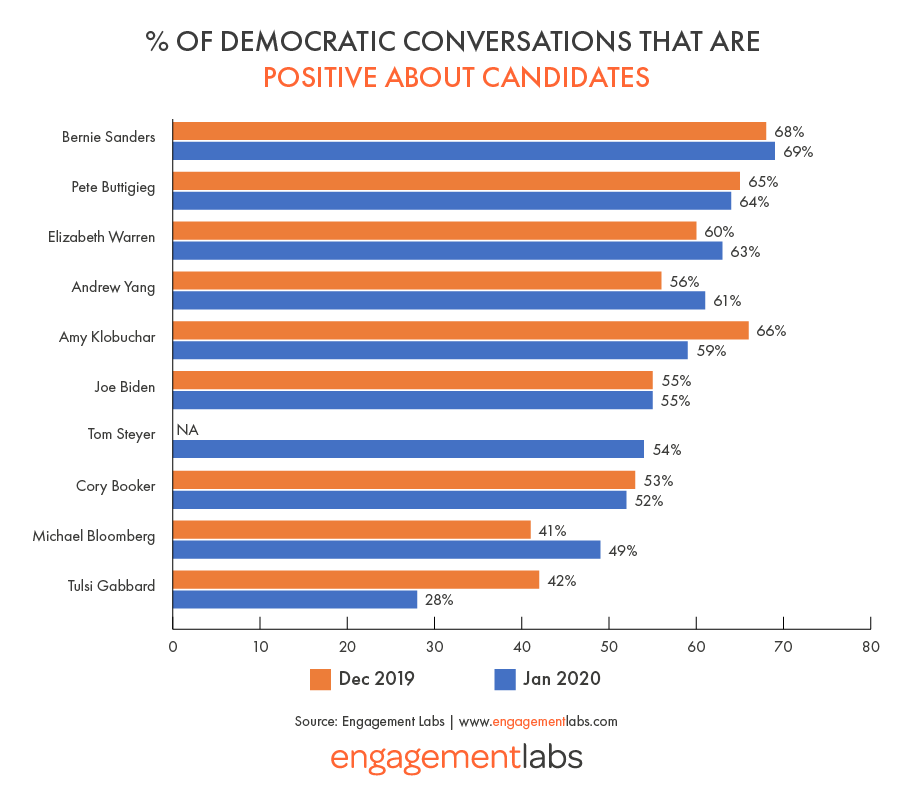 While Biden leads in the conversations of African Americans, his lead over Sanders is weaker than many observers might expect. Biden’s edge over Sanders in the frequency of conversations is just 31.7% to 29.0%, and Sanders has the most enthusiasm of any candidate, with 69% positive versus 58% for Biden. 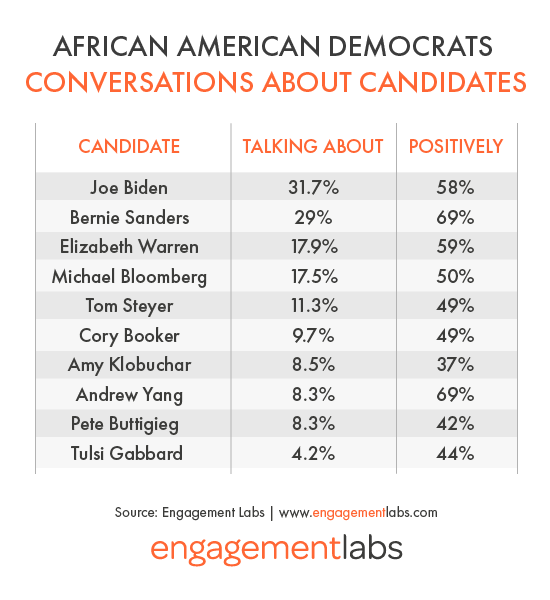 “African Americans are a key voting constituency in Democratic politics and their conversations are extremely important to monitor,” said Engagement Labs’ Ed Keller. “Sanders makes a very strong showing, belying the conventional wisdom that this group – which will be front and center in South Carolina – is Biden’s fire wall.”

This Democratic Word-of-Mouth study was conducted via online interviews among 1,925 registered Democrats between January 8 and 9, 2020. Respondents reported on candidate conversations they participated in during the past seven days.