Engagement Labs Ranks the Top U.S. Beer and Liquor Brands Based on Social Media Performance and Word of Mouth Conversations

TORONTO, ON – May 12, 2016 – Technology and data company Engagement Labs, released rankings on the top U.S. beer and liquor brands on social media and through word of mouth (WOM) conversations. 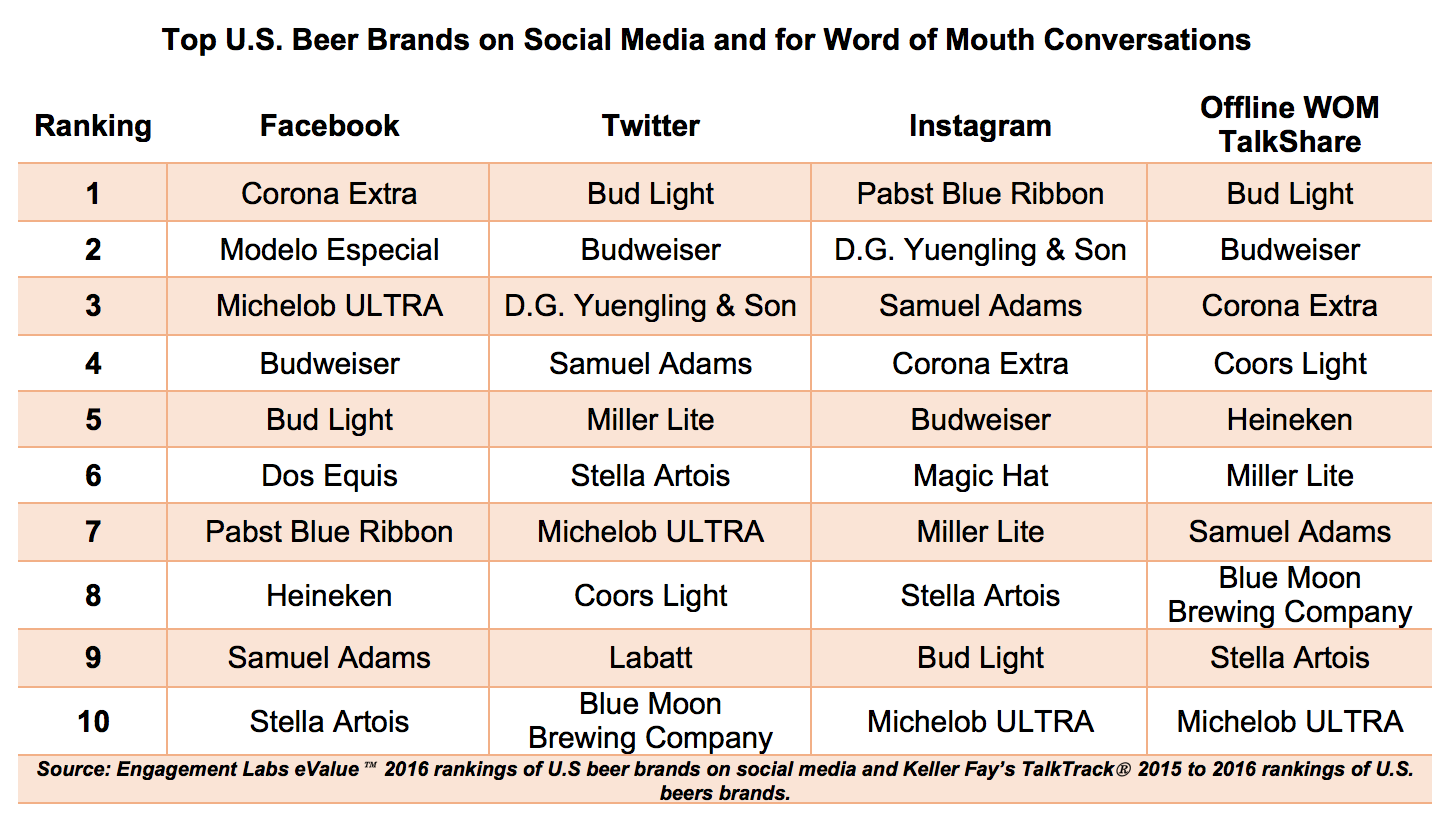 “While beer and liquor brands do well reaching audiences on social media, engagement and retention are a key focus for these brands, as they aim to stay ahead of their competitors. Creating engagement strategies that encourage consumers to consistently interact with their channels, allows certain brands to remain top of mind at purchasing time,” stated Bryan Segal, CEO at Engagement Labs.

On Facebook, Corona Extra secured the first place ranking for beer brands with the highest overall eValue score, posting a combination of professional photography and user-generated content that highlights the product in various summer-related scenarios. Second place brand, Modelo Especial, boasted the highest Engagement score and most active user base. Posting a mix of cocktail recipes that incorporate the beer, the brand generated the most likes, comments and shares per 1,000 fans. Based on their high engagement the brand could post more frequently to further boost online activity. Bud Light ranked fifth overall for eValue scores, however had the highest Impact score and Responsiveness score of the top ten.

On Instagram, Pabst Blue Ribbon ranked first for beer brands with the highest eValue and Impact score. Making the most of user-generated content and humorous pop-cultural references, Pabst Blue Ribbon scored the second highest Engagement, second only to D.G. Yeungling & Son. Leveraging relevant hashtags with their user-generated content, Yeungling & Son garnered the most likes per 1,000 fans.

“Our research showed that while beer brands boasted large followers, the most successful brands were the ones posting content that engaged their audiences and had effective response strategies. User generated content played a big role in some of the brand’s social media success.” noted Segal. “In such a competitive category, a consumer wants to see what makes a brand stands out from the rest and an engaging online experience that highlights real customers in real situations can be an effective approach.” 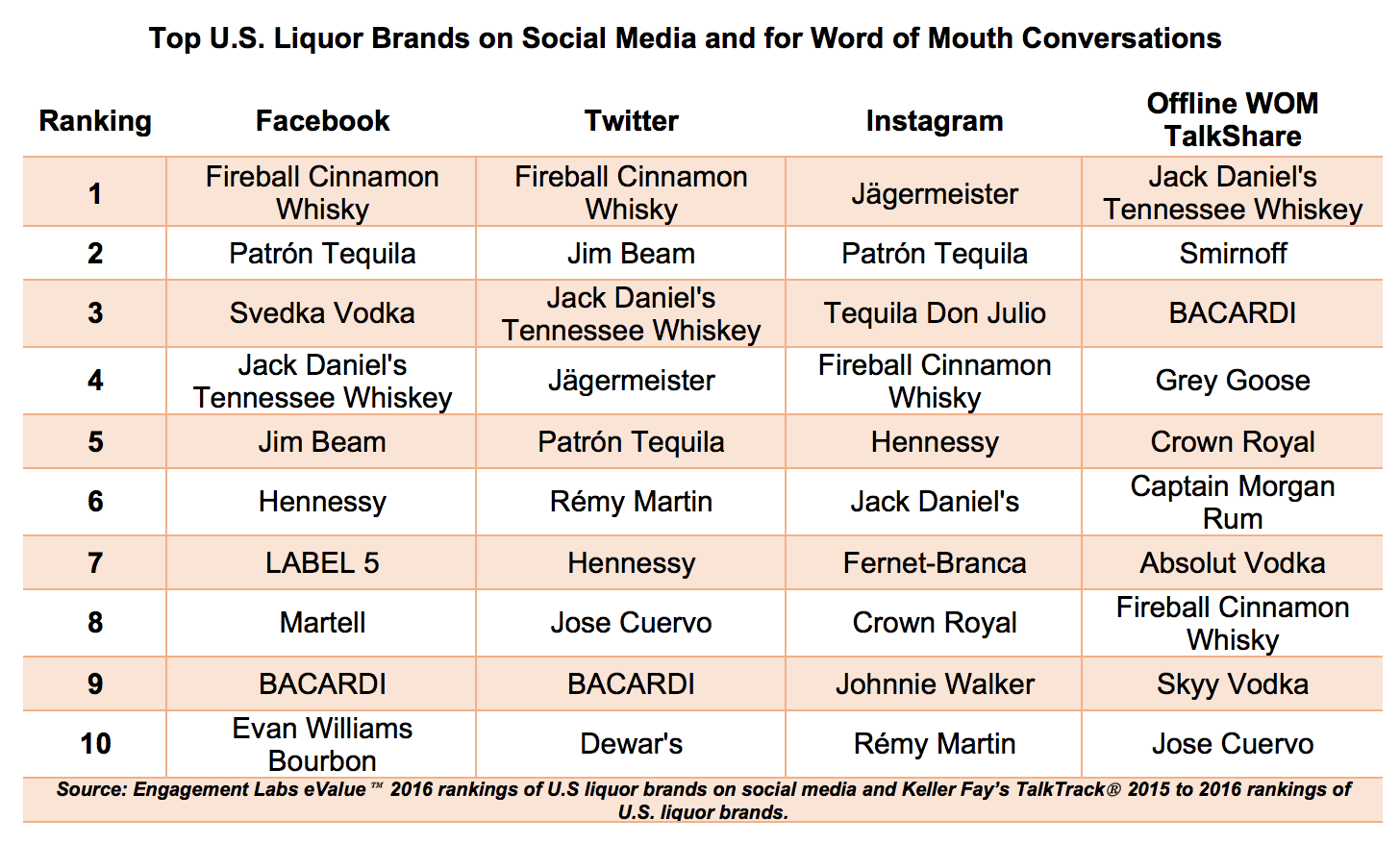 Among liquor brands on Facebook, Fireball Cinnamon Whisky ranked first with the highest eValue and Engagement score thanks to a social media strategy that consisted of creative and unique memes and images centering around the product. Patrón Tequila scored the highest Impact score, while Jack Daniel’s Tennessee Whisky generated the highest Responsiveness score of the group.

On Twitter, Fireball Cinnamon Whisky had the highest Responsiveness of the group and ranked first for overall eValue score, while Jack Daniel’s Tennessee Whisky had the highest Engagement score, ranking third for eValue score. The brand engaged audiences by posted captivating professional photography of their product, however had an extremely low Responsiveness score.

On Instagram, Jägermeister ranked first among liquor brands with the highest eValue and Engagement score. Earning the most likes per 1,000 fans, Jägermeister leveraged popular hashtags with images focused on their product and brand-related merchandise. The brand also scored the highest Impact of the top ten, tying with Hennessy and Jack Daniel’s Tennessee Whisky.

In an analysis of the TalkTrack data for beer brands, some significant overlap was seen between the successful online beer brands and the brands leading the offline WOM conversation. According to their WOM TalkShare rankings - the percentage of conversation an individual brand has relative to WOM for all brands measured - beer brands Bud Light, Budweiser and Corona Extra experienced offline success as well. However, when studying the offline conversations around liquor brands, stark differences were identified, as the top ten list consisted of such brands as Smirnoff, Grey Goose and Captain Morgan Rum, that did not rank in the top ten for any social media channel.