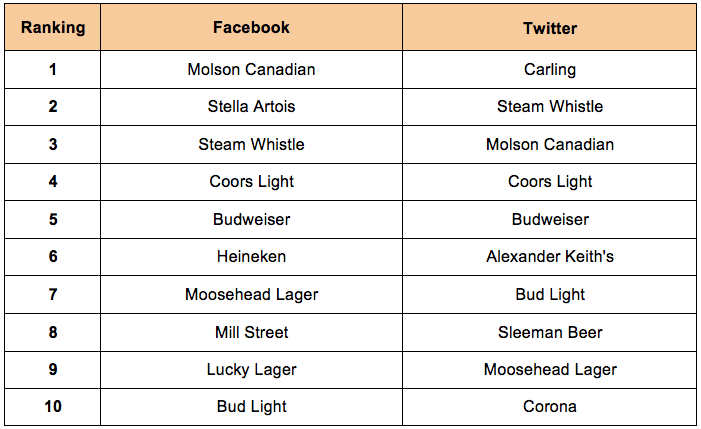 According to Engagement Labs’ data, Molson Canadian took first place on Facebook with the highest eValue score of the group. The brand over indexed in both its Engagement and Impact scores based on the group average. Stella Artois secured second place overall by ranking first for both Impact and Responsiveness. Stella Artois created a social media strategy with a much different approach than Molson Canadian’s. They leveraged high quality images that focused on the ‘experience’ of drinking its beer.

“Molson Canadian utilizes its Canadian reputation to connect with its fan base by posting content embracing Canadian stereotypes such as a love for hockey, while also leveraging its ‘We Are Canadian’ campaign,” stated Bryan Segal, CEO of Engagement Labs. “For example, the brands highest engaged posts on Facebook all leveraged very Canadian-centric content. The brands top engaged post, which garnered more than 16,400 likes, stated ‘Take a load off eh’ accompanied by an image of a man carrying a case of beer..”

Carling, ranked first on Twitter, scored above average for Engagement, Impact and Responsiveness. Steam Whistle, ranked second, scored the highest for Responsiveness with a score of 75.92, more than three times higher than the group average, which shows a continued dedication and focus to replying to fans and followers. Molson Canadian, ranked third on Twitter, had the highest Impact score along with the highest active user base and saw the most retweets and favourites per 1,000 fans.

Rounding out the top five on Twitter, Budweiser placed first for Engagement and has the highest number of mentions per 1000 fans. However, the brand had a low Responsiveness score which prevented the Company from ranking higher for its overall eValue score. With such an engaged audience, the brand has mass opportunity to apply more emphasis on its response strategy to further encourage engagement and create two-way dialogue with fans.

“With a larger fan base on social media, it is expected that certain brands will automatically excel due to its larger followings. But in reality, this isn’t always the case. On Twitter, the data shows that brands should focus on quality posts and user behaviour, such as retweets rather than solely focusing on quantity of posts or number of followers,” noted Segal. “As indicated by the Responsiveness scores, it’s important for brands to focus on opening two-way communication. Brands can post as much engaging content as possible, but if they don’t focus on directly interacting with followers, there is a risk of losing the engagement they’ve worked so hard to generate.”