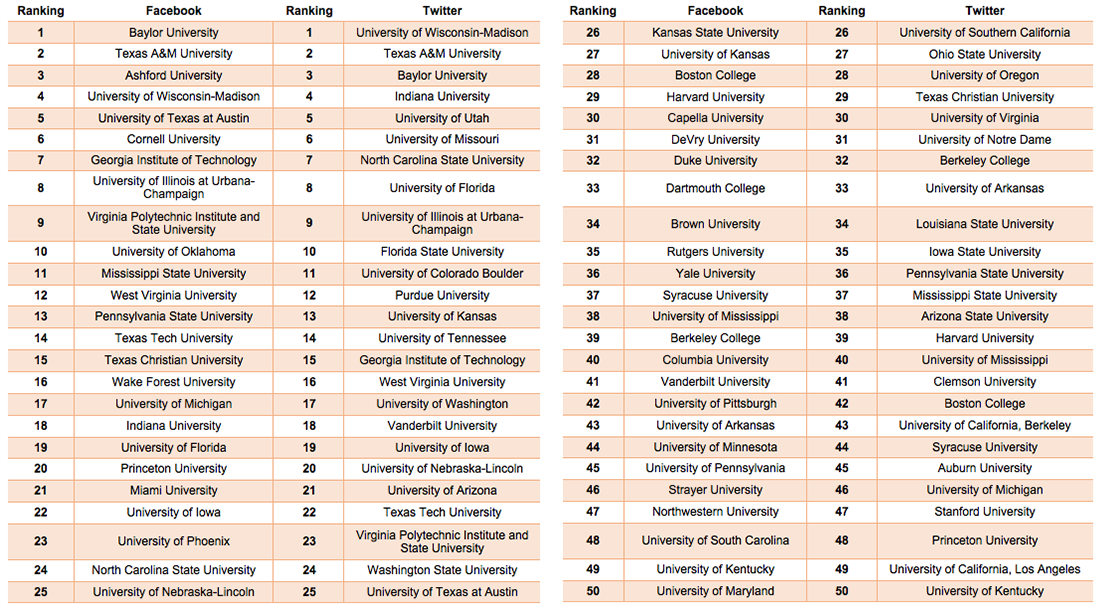 The colleges and universities examined included those categorized as Ivy League, for-profit and those within the following NCAA conferences: the Big Ten, the Big 12, the ACC, the Pac-12, and the SEC.

“Students currently attending academic institutions in the U.S. have become accustomed to social media, as it is a vital tool used for communication and staying up-to-date on news. With social media engrained in student life, it provides an excellent opportunity for academic institutions to communicate with prospective and current students through two-way, real time communication,” stated Bryan Segal, CEO at Engagement Labs. “Known for their ‘always-on’ mentality, students serve as a highly engaged user base that will interact frequently with shared content as long as it’s engaging and compelling.”

On Facebook, Baylor University was the leader with the highest eValue score. The university also had the highest Engagement score due to posting high-quality content revolving around its football team and campus, which enabled its followers to interact. Additionally, Baylor generated the highest number of comments and likes per 1,000 fans and had the most active user base of the top ten.

According to Engagement Labs’ eValue score, Texas A&M University placed second overall and had the highest amount of overall likes and comments. Ashford University, which ranked third overall, had the highest Responsiveness of the group.

“On Facebook, we found that many of the colleges and universities identified the right type of content that encourages its followers to engage, as indicated by the high Engagement scores across the board,” continued Segal. “While social channels create ample opportunity for recruitment and school promotion to students, they also allow for engaging alumni and parents.”

On Twitter, University of Wisconsin-Madison ranked first for overall eValue score and boasted the highest number of retweets and favorites per 1,000 fans. Texas A&M University ranked second on Twitter with the highest Impact score and the highest follower growth of the top ten, with 25,515 new followers during the time period measured.

The highest Engagement score of the top ten was secured once again by Baylor, which placed third overall, thanks to a content-focused strategy similar to their Facebook channel. Fifth place finisher University of Utah scored the highest Responsiveness and response rate of the top ten.

“Engagement may be high across both channels, but the lower Responsiveness scores - particularly on Twitter - showcase a need for these academic institutions to place more emphasis on their response strategies to participate in two-way communication. Followers are turning to these channels for answers regarding topics such as academic needs or campus life, so providing the requested information via social is essential to the promotion of their brand. Overall, an effective response strategy helps build relationships with students, prospects and the community-at-large,” noted Segal.