As Letterman Exits the Late Night Stage, the Competition on Social Media Is Just Getting Started

With an increase in conversations – both on and offline – taking place around late night shows due to the retirement of late nights longest running host, David Letterman, Engagement Labs used its eValue tool to measure the social media performance of late night shows on Twitter and Facebook from May 14 to May 21, the day after Letterman’s final appearance.

According to eValue data, the top ten rankings for late night shows on Facebook are: 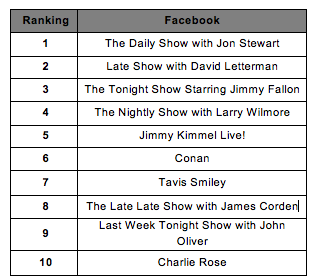 According to eValue data, the top ten rankings for late night shows on Twitter are: 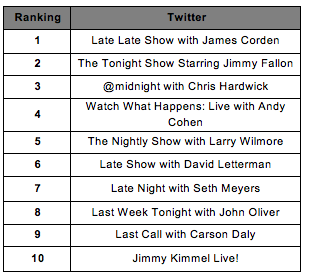 “Eyeballs are moving away from the TV set and towards social channels. Therefore, television shows are no longer solely relying on air-time to engage with their viewers. To get those eyeballs viewing their content, these shows are implementing social media strategies to enable audiences to engage with their content online,” said Bryan Segal, CEO of Engagement Labs. “Late night shows are using their social channels to repurpose videos of memorable moments or highlights from their broadcasts, and creating new content to inform their audience about upcoming guests. Furthermore, they are creating specific content for their broadcast audience that they know will then be shared by their online audiences.”

On Wednesday, May 20, 2015, 13.76 million viewers watched as legendary late night host David Letterman counted down his final ‘Top Ten List.’ During its final week, the show saw an increase in fans and a spike in likes, retweets and favorites, on both Facebook and Twitter which caused “The Late Show” to rank second on Facebook and sixth on Twitter.

“Letterman saw high Engagement and Impact scores on Facebook, which is likely due to the hype around his last show. However, the numbers were not enough to take the top spot from ‘The Daily Show,’ who saw an Impact score of 93.5 along with the second highest Responsiveness score,” continued Segal. “On Twitter, ‘The Late Late Show with James Corden’ dominated the rankings with an eValue score of 98.35, taking top spot in our Engagement and Impact sub-scores along with likes, favorites and mentions overall and per 1000 fans. This proves that ‘The Late Late Show’ knows their Twitter audience and is creating content that their fans are excited to share with their friends and followers.”