The four horsemen are industry leaders among the tech sector and these brands have become fixtures in everyday lives. According to Keller Fay data, 18 percent of people talk about one of these four brands every day. However, the demographics of who is talking about these brands vary dramatically by age.

“Our research finds that one-third of all teenagers and one-quarter of all twenty year olds talk daily about one of the four brands. Now, this is not surprising given that younger demographics have a high propensity towards technology, especially within their everyday lives. On the other end of the spectrum, we found that less than one in ten fifty and sixty year olds talk about one of these brands on a daily basis,” said Ed Keller, CEO at Keller Fay and President at Engagement Labs.

“Research demonstrates that consumer conversation is a huge driver of sales and revenue. In fact, two-thirds of sales come from offline conversation. Thus, having an in-depth understanding of the demographics who are talking about your brand can have a major influence on the marketing strategies that are employed to reach target audiences and drive business forward via earned media recommendation,” continued Keller.

Share of ‘Four Horseman’ Conversation Among all U.S. Persons (13-69) 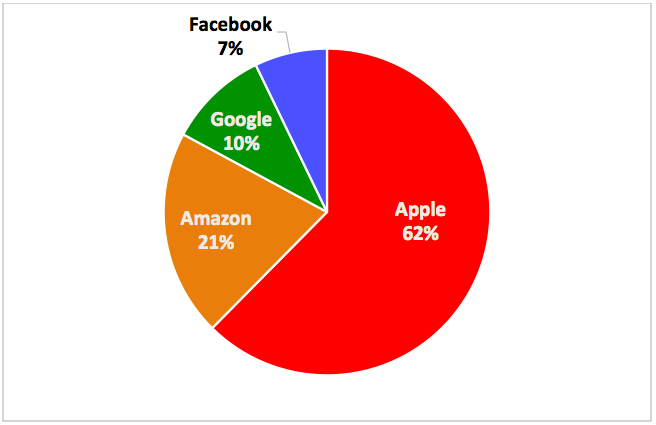 Rankings of the “Four Horsemen” TalkShare by Age 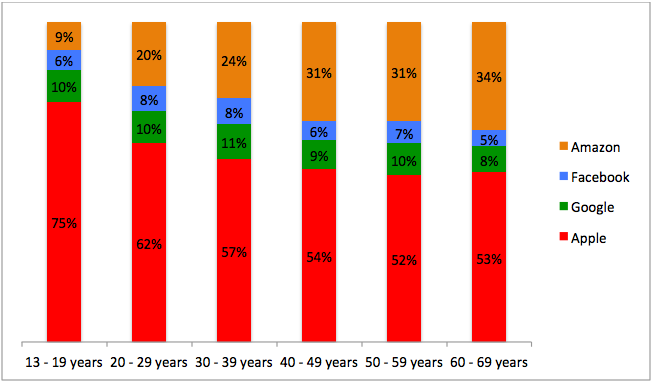 Even though there is an overall skew toward younger people talking about these brands in general, there are some interesting differences in share of conversations among older consumers. Among consumers over the age of 40, Amazon had a strong impact with more than three in ten of AFGA talk dedicated to the brand, which is three times the proportion Amazon received from teenagers. Though, across all generations, Amazon ranked second for the most talked about brand, which can be a contributing factor to the brand’s surge in stock value throughout 2015.